Skip to content
Photo by Steve Johnson. The BFD.

“Rainbow Youth has responded to the petition started by All Individuals Matter and I am disappointed to see they have chosen to support Shaneel Lal remaining on their board following his refusal to retract racist comments toward the pioneers of Homosexual Law Reform,” says AIM spokesperson Stephen Berry.

On July 17, Rainbow Youth replied to the controversy by stating 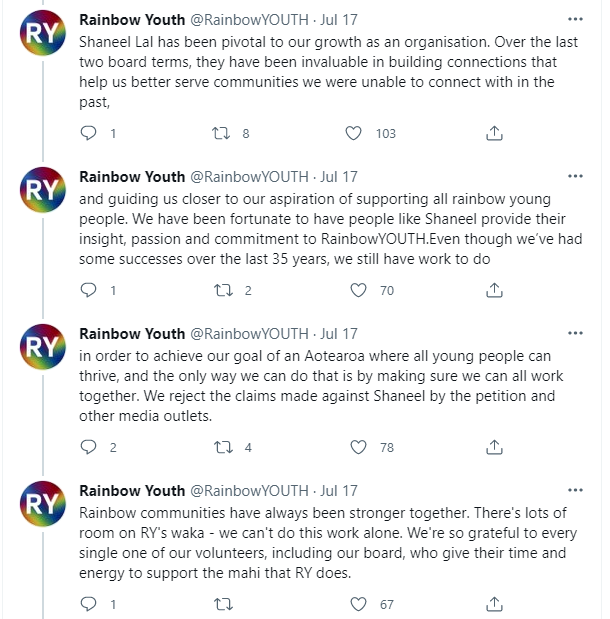 “If Rainbow Youth genuinely aspires for all LGBT people to work together, why are they supporting someone who repeatedly, explicitly attacks others on the basis of their skin colour?” Berry asks. “From referring to journalists as ‘crackers’ to attacking a part-indigenous trans woman as a ‘disgusting animal’, telling her to ‘block and run because I’d serve your transphobic ass on a platter.”

Gay Express magazine ran an article on the controversy on July 16th, including a link to the All Individuals Matter petition requesting Rainbow Youth expel Mx. Lal from the organisation, however that article has since been removed. Mr. Berry is disappointed by the backstep from the magazine but understands why they have done it.

“The article had only just been published when radical left-wing activists marshalled people to Gay Express’ Facebook and Twitter accounts in order to harangue them with threats and abuse. Many stated that an LGBT publication should not be writing articles such as the one which highlighted Lal’s behaviour. I’m horrified that so many people do not believe in a free press.”

The petition calling upon Rainbow Youth to expel Shaneel Lal from their position on the board was not created by Gay Express magazine despite what some Lal supporters may claim, it was created by All Individuals Matter and it is still online here https://www.change.org/NoRacistsInRainbowYouth

“Rainbow Youth are under the mistaken belief that Shaneel Lal’s involvement is good for their organisation. I hope they reconsider whether organisations that have donated to Rainbow Youth in the past will want their brands associated with torrents of racial abuse in the future.”