On the face of it, New Zealand is a lucky country of five million, affectionately termed Godzone. For two years New Zealand has largely avoided Covid by strictly controlling its borders. In 2021 the Pfizer vaccine was rolled out to 90% of the eligible population. Therefore, in the virtual absence of any confounding effect of Covid infection, NZ should be a unique source of invaluable data on vaccine safety, and indeed the government maintains it has all been a huge success. Accordingly, employees of all government departments are mandated, on pain of losing their job, to be vaccinated. But this week the government narrative began to completely unravel for a rather obscure reason.

We have a universal government accident compensation scheme (ACC). Anyone who suffers injury in New Zealand as a result of an accident is entitled to claim benefits and compensation from ACC. In fact, there is no path for personal injury claims with private insurers; they must go through ACC. As you can imagine, the hardy folk at ACC are tasked with investigating all claims thoroughly to avoid any benefit fraud.

Vaccine injury falls under their jurisdiction, so ACC staff have, uniquely in New Zealand, been immersing themselves in the torrid details of vaccine injury.

The avalanche of claims (which could top 100,000 if the government were to admit liability) and their severity has shocked ACC staff to such an extent that a great many staff members are rightfully concerned that they should not be compelled to vaccinate or boost. The Government, who have been trying to hide the extent of vaccine injury from the public and are eager not to be caught out, have reportedly caved into ACC staff demands and extended the deadline for mandated vaccination into an uncertain future.

Simultaneously we have heard that the government wishes to avoid liability by arguing that vaccine injuries are not actually accidents but the result of free choices by individuals to undertake an experimental treatment. Perhaps it wishes to take this stance because of the potentially huge cost of injury claims. In so doing, is it trying to ignore the fact that it mandated vaccination on pain of loss of employment?

How Do We Know This?

Prime Minister Ardern has famously told the public that “the Government should be your sole source of information”; in her words all other sources of information, especially social media, are worthless “grains of salt”.

We are a compliant and trusting people by nature. The Labour Government’s assurances that the Pfizer vaccine is absolutely safe and effective were initially embraced rather uncritically but fortunately we do still talk to one another. As the vaccine rollout progressed, it became apparent to those adventurous enough to diverge from Ardern’s strictures by reading foreign media sources, that the mRNA vaccine is rather ineffective and rapidly wears off. More importantly, the number of people suffering from vaccine injuries is so large that almost everyone has a few friends (I have almost a dozen) who have suffered serious injury.

The vaccine injury blackout that the government has been able to exert over the media has been so total that the vaccine safety narrative at first proved very robust. Despite the injury stories circulating among friends and on social media, it was always possible for the Government to dismiss the fate of one’s injured friends as rare and unfortunate (if indeed they ever mentioned it). In fact, many vaccine-injured have been trolled on social media for breaking the ‘obviously’ true narrative of safety and made to feel inadequate or worse: the cause of their own injury. The days of this herd mentality are now numbered. People have started to blow the whistle – they are largely the source of this article.

How Did NZ Go So Far Down the Rabbit Hole?

For a whole population to be taken in by a false narrative, a lot of factors had to come together. Yes, there is of course a lot of money to be made by some corporations from vaccines and that is a powerful motivating force but we shouldn’t underestimate the power of ideas and the mistaken decisions that originate from strongly held beliefs.

The turning point appears to be the case of a 17-year-old girl who died from a stroke immediately following vaccination in September last year. A media hack quickly picked this up and questioned Ardern at her press conference. Ardern immediately and forcefully responded that the medical event was unrelated to vaccination. She described the media questioning as irresponsible. Her reply appeared designed to squash any narrative that could cause vaccine hesitancy. This strong response, which was probably not based on any proven information about the case, had the unfortunate effect of setting the tone for all government departments – absence of risk from Covid vaccines became an accepted stance and came to dominate government media advertising.

At that point in time Jacinda had a strong reputation for honesty and kindness. Apparently, she decided to use up that political capital to promote a no risk from vaccination policy which she possibly believed was a social good. A government advisor epidemiologist has privately acknowledged to me that strokes are a known outcome of mRNA vaccination but our government continues to ignore that. ACC staff have denied claims based on injury from heart attacks and stroke but they are well aware of their rate of incidence.

There has been from the beginning an all court press to persuade doctors and nurses to support universal mandated vaccination which, given the high rate of vaccine injuries, rapidly morphed into policies promoting silence about risks. Doctors expressing caution have been sidelined and unvaccinated professionals have been prevented from working. Whistleblowers among the medical profession have privately reported wards overwhelmed with cardiac event cases following vaccination including myo- and pericarditis but hospital policies have ensured that many patients with vaccine injuries go unreported. Some have been sent home with aspirin.

Staff have reportedly been reassured that it is alright to keep mum both because vaccination is a social good and because Covid itself is such a frightening disease. Given the government vaccination injury blackout and the general perception in the medical profession of vaccine safety, there have been a number of severe vaccine injuries that have flown under the radar. I have two friends for example who developed rapid onset leukaemia after vaccination (a known side effect of gene therapy) but whose doctors had no inkling that vaccination should be investigated as a possible cause. Such rarer cases including cancer, kidney and liver disease are brushed aside without reporting.

How Were the NZ Media Managed?

The Science Media Centre was set up in 2002 to specifically undermine opposition to GM crops by offering courses and talks for media science correspondents given by qualified ‘experts’. A central plank of the Science Media Centre is the idea that there are certain areas of science where there cannot be two sides to an argument. One powerful example of this is climate science. It has been readily understandable to science correspondents that articles that give credence to climate change deniers should not be given any space, except to lampoon them.

A similar doctrine has emerged with regard to vaccines. Crucially, biotechnology, despite its very poor safety record, has been accorded a similar sacred cow status. Given the unstable financial situation of the NZ media, significant financial support from the NZ government – probably about $100 million – has helped to promote a universally uncritical stance that has isolated the NZ population from all but adoring elements of global Covid vaccine reporting.

Some investigative journalists have resigned in protest and blown the whistle on mainstream editors who have assiduously edited out discussion of the dire circumstances of some of our vaccine injured. I was told by one nationally famous radio host that no programmes critical of vaccination safety can be aired.

Here is the rub: NZ government policy has broken the bank. Grant Robertson, deputy PM and finance mister set aside $62 billion 20 months ago to provide for Covid recovery. He envisioned this would last for five years. At the time of writing, the government has spent $64 billion and has no money left for the planned fourth booster.

NZ government debt has almost doubled in the space of two years from $69 million 2019 to $123 billion last year. To put this in perspective, NZ has a population of 5 million, so our rate of government expenditure on Covid per head of population is roughly the same as that in the USA and UK but we have spent that before the disease has even arrived and there is no money left.

Very few improvements have been made to our underfunded and ageing hospital system because NZ policy was predicated on keeping Covid out while we vaccinated the population and thereby kept everyone safe for the future. No allowance was made for the vaccine being ineffective or risky. Now Omicron has arrived, the government is in disarray, imploring the whole population to come for boosters at just that moment when we are waking up to the damage vaccines have already wreaked on our health.

Where Does This Leave NZ Now?

Oh what a tangled web we weave

When first we practice to deceive

In 2020 it was hard to imagine the sorry consequences of Jacinda Ardern’s quaint faith in vaccination as a stand-alone solution but they are all too evident now. Among the members of the public who have stood by Ardern and kept a closed mind, there is fear and panic. This is unfortunately and mistakenly directed at the very small number of unvaccinated New Zealanders who Jacinda tells them will upset her well-laid plans by spreading Covid among the faithful. Most people living overseas will know this for what it is – a red herring. Omicron is all for equal opportunity – it does not discriminate much between vaccinated or unvaccinated. The government seems impervious to this reality and happy to blame the unvaccinated for its woes. We were advised yesterday to wear two masks one on top of the other. We await our fate. 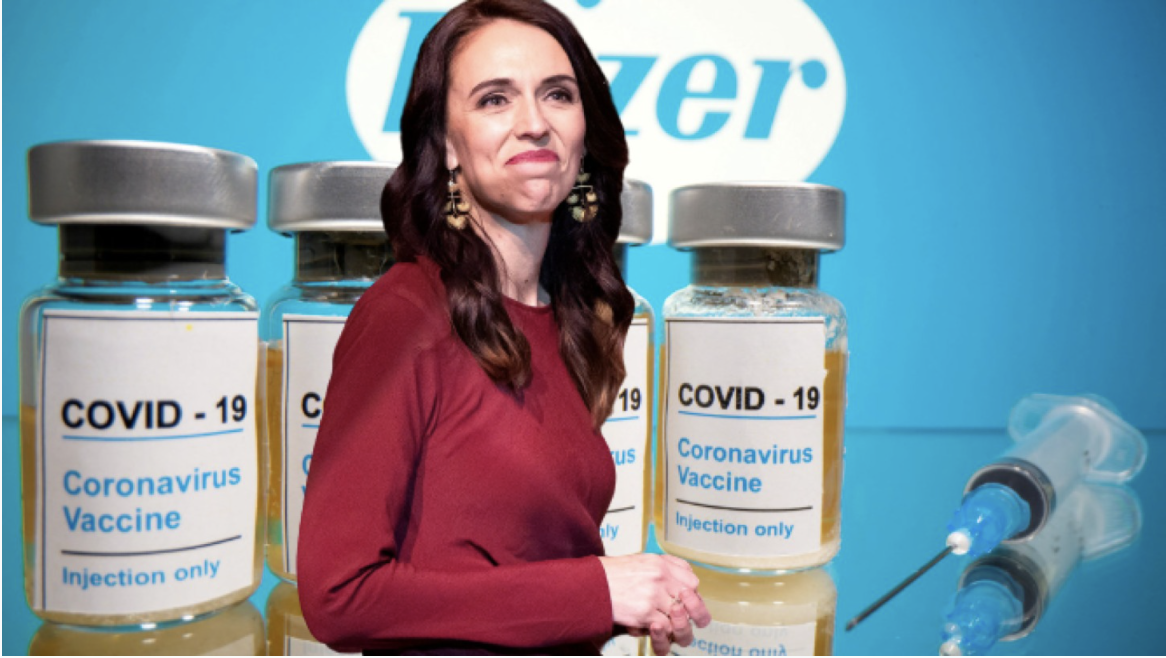