Skip to content
Auckland. Photo by Partha Narasimhan. The BFD

John is the Chief Investment Officer at Wealth Morning. His responsibilities include trading, client service, and compliance. He is an experienced investor and portfolio manager, trading both on his own account and assisting with high net-worth clients. In addition to contributing financial and geopolitical articles to this site, John is a bestselling author in his own right. His international thrillers have appeared on the USA Today and Amazon bestseller lists.

It’s all about hopes. Dreams. Ambitions.

I came to realise this when I spoke to a recent immigrant to our shores. He was of Malaysian descent, and he was everything you could ever want in a new Kiwi. He was hardworking. He had plans. He wanted to get ahead in life.

Why did he come to New Zealand? Well, he had chosen this nation because he believed that it was a fair and decent society. One that would provide him and his family with a positive future. And he fully intended to make the most of this golden opportunity.

So, he wanted to start a new business. Of course, he understood that there was a learning curve involved. He would need to educate himself on the new rules of compliance, as well as the cultural quirks of the land. But he was prepared for this challenge. After all, he had been an entrepreneur back in the old country. So he wasn’t going into this totally blind.

Certainly, he was mindful that he wasn’t a very wealthy man. He was comfortably middle class, yes, but he was feeling the pinch after having his money divided by a factor of three. The currency exchange was painful. And let’s face it: no one ever likes to see their buying power shrink so dramatically.

Nonetheless, he understood that this was the name of the game. It was a sacrifice he had chosen to undertake. Trading one way of life for another. Apples for oranges. And, right now, he was in favour of oranges.

He considered himself fortunate that he had just enough capital to take a risk. And he was determined to push forward. But… it wasn’t long before he ran into a psychological roadblock.

He was attending a church that was predominantly made up of immigrants just like him. And, over and over again, he got a discouraging message from his new friends: starting a business in New Zealand was a fool’s errand. It was too tough, too compliance-heavy, and most businesses were doomed to failure.

They told him of a better option instead. Buy a house. Rent it out. Then, in the fullness of time, cash in on the capital gains. This was as close as you could get to a guaranteed nest egg.

This gave him the wobbles, and he put his initial plan on pause.

He had to ask himself some stiff questions.

Could he afford to fail in his business? Could he really? And if there’s so much doubt, why not invest in property instead of starting a business?

Wouldn’t that be the safer option? The saner option?

Of course, there’s no hiding it: property looms large in the Kiwi imagination.

Everyone talks about it. Everyone. And it can be hard to maintain a neutral perspective because the deck appears to be so heavily stacked in favour of property.

In January 2020, my colleague Simon revealed the following numbers:

So there’s no denying it: we Kiwis love property. And, yes, we have the debt burden to match.

In January 2021, statistics from the Reserve Bank showed a record blowout of our household debt-to-income ratio — 165.6%.

It’s stunning. Extraordinary. Indeed, our debt has been climbing steadily for the past 10 years now.

As a country, when we debate what we should do — or shouldn’t do — about housing, we often find that it’s not an easy conversation to have.

If you need proof of this, just look at what happened when Christopher Luxon recently took over the helm as National leader. He immediately found himself having to deal with a storm in a teacup when it was revealed that he owned seven properties.

This dominated the news cycle for at least one week — which is an eternity in this age of clickbait and sensation.

Now, let’s be clear: it is not unusual for a man of his status to be owning several properties. He’s a multimillionaire. He wants to protect and grow his wealth. And it just so happens that property is the default way of doing this. It’s the path of least resistance.

So…why all the question marks?

Some say it’s the left-leaning pundits who are out to discredit Luxon.

But, really, these are overly simplistic explanations.

Look a bit closer. You’ll find that the issue is actually a bit more complex than that. A bit more profound.

‘Here’s the critical problem in New Zealand over the last 30 years: we are some of the hardest working people on planet Earth but we are not generating enough income or productivity in this economy. That means fundamentally our wages and our salaries are not going up sufficiently and, as a result, people don’t get to have the choices and freedoms about how they get to live their lives as much.’

Luxon has identified the problem. And I agree with him. New Zealand seems to be permanently stuck in 3rd gear.

Sure, we fare better than many poorer countries. But as far as the developed world is concerned, we find ourselves lacking and lagging when it comes to business enterprise.

This may well be the reason why we have a million Kiwis living overseas. It’s a sprawling diaspora that’s so huge, it’s eye-watering. There are over 500,000 based in Australia alone. It’s an epic brain drain.

You can connect the dots:

But, really, how significant is the impact of this?

Can we actually quantify it?

Well, you can connect the dots even more:

What this means is there are 11 times more listed companies in Australia than there are in New Zealand.

Now, I know what you must be thinking: ‘Well, jeez. So what? Do the math. Australia is a larger country. Of course, they will have more listed companies than we do.’

Uh-huh. Yes, indeed. But here’s where it gets interesting. I have certainly crunched the numbers, and here’s what they reveal:

So…in terms of population size…Australia is *only* 5 times larger than New Zealand. And yet they have 11 times more listed companies than we do.

This is grossly disproportionate. So, even if you do adjust for per-capita differences, you will still find that we’re underperforming in a huge way.

In fact, we should actually have closer to 400 companies on our side of the ditch — not 180.

What are we missing out on because there’s so little scale and so little liquidity in our capital markets?

Well, as it turns out, quite a lot:

The consequences of this are far-reaching — and they will serve to define our nation for generations to come.

Here’s what Christopher Luxon has to say about making the choice between housing and the rest of the Kiwi economy:

‘I wouldn’t want to see house prices fall dramatically, but there might be a period of time where house prices do come back, as there has been over the last 30 years. That’s purely because of what’s happening in the market and it’s about supply and demand.

Luxon sounds cautious here. He’s playing it safe. And I can’t blame him.

Housing is a sacred cow in New Zealand — and he doesn’t want to give the impression that he will rock the boat if he becomes prime minister.

So, by necessity, his response is a boilerplate one. He reckons that we need to protect the housing market and uplift it — while at the same time finding ways to uplift the economy.

In other words, let’s not segment or redistribute the cake. Let’s grow it instead.

This sounds very compelling. Very aspirational. The best way to please everyone.

If this is what a future Luxon administration can achieve, well, I’m all for it.

And yet…here’s the problem: every government since the beginning of time has found it necessary to make difficult choices regarding the cake.

It’s the reason why we have a Left and a Right — and why we constantly bicker over whether we should pursue Option A *or* Option B *or* Option C.

A leader may say, ‘I promise to give you all options with no penalty.’

Who gets what? And by how much? And when?

In the words of Shakespeare: ‘Heavy is the head that wears the crown.’

Here’s what we really need to think about:

So let’s be rational. Let’s connect the dots again.

Luxon has clearly benefited from the capital markets. So he would do well to lean harder into his credentials in this area. Find ways to spur the development of these markets. Help them flourish and bloom.

Luxon needs to be courageous enough to set a fresh tone for the country to follow.

We certainly need it. Because when more listed companies emerge, it will most certainly filter down to the rest of the economy. We will see local suppliers, vendors, and retailers prosper.

You can call it the Lord of the Rings effect. Since 2001, we have all enjoyed the benefits of Hollywood knocking on our door. It’s created a cottage industry for film and television production here in West Auckland, where I live.

However, as recent disappointments have shown us, foreign multinationals can be fickle-minded. Easy come, easy go. They may like you one moment, but abandon you the next.

So, instead of depending solely on them, well, maybe it’s time for us to get ourselves in gear. Start consciously investing in a business environment that will make a long-term difference for our nation and our future.

Looking Ahead at 2022 and Beyond

Here’s the truth: succeeding in business is tough.

Statistics show that 70% of small businesses worldwide fail within 10 years.

In New Zealand, that number is probably closer to 80%. This cultural cringe weighs us down. Robs us of courage. Robs us of forward momentum.

Yes, of course, housing is necessary. It offers us comfort and security. We all need a roof over our heads. But a modern economy has to be more dynamic than that. It has to be about taking measured risks. It has to be about seizing the bull by the horns. That’s how progress is made.

Do you remember the immigrant I talked about at the beginning? And the difficult choice he faces between setting up a business *or* investing in a property?

Well, I dream of a day when the choice is not so stark. Not so agonising.

I dream of a day when he can boldly say, hand on heart, ‘I love New Zealand, and torpedoes be damned, I’m going to start a business anyway. Because I know I have a fighting chance…’

(This article is general in nature and should not be construed as any financial or investment advice. To obtain guidance for your specific situation, please seek independent financial advice.) 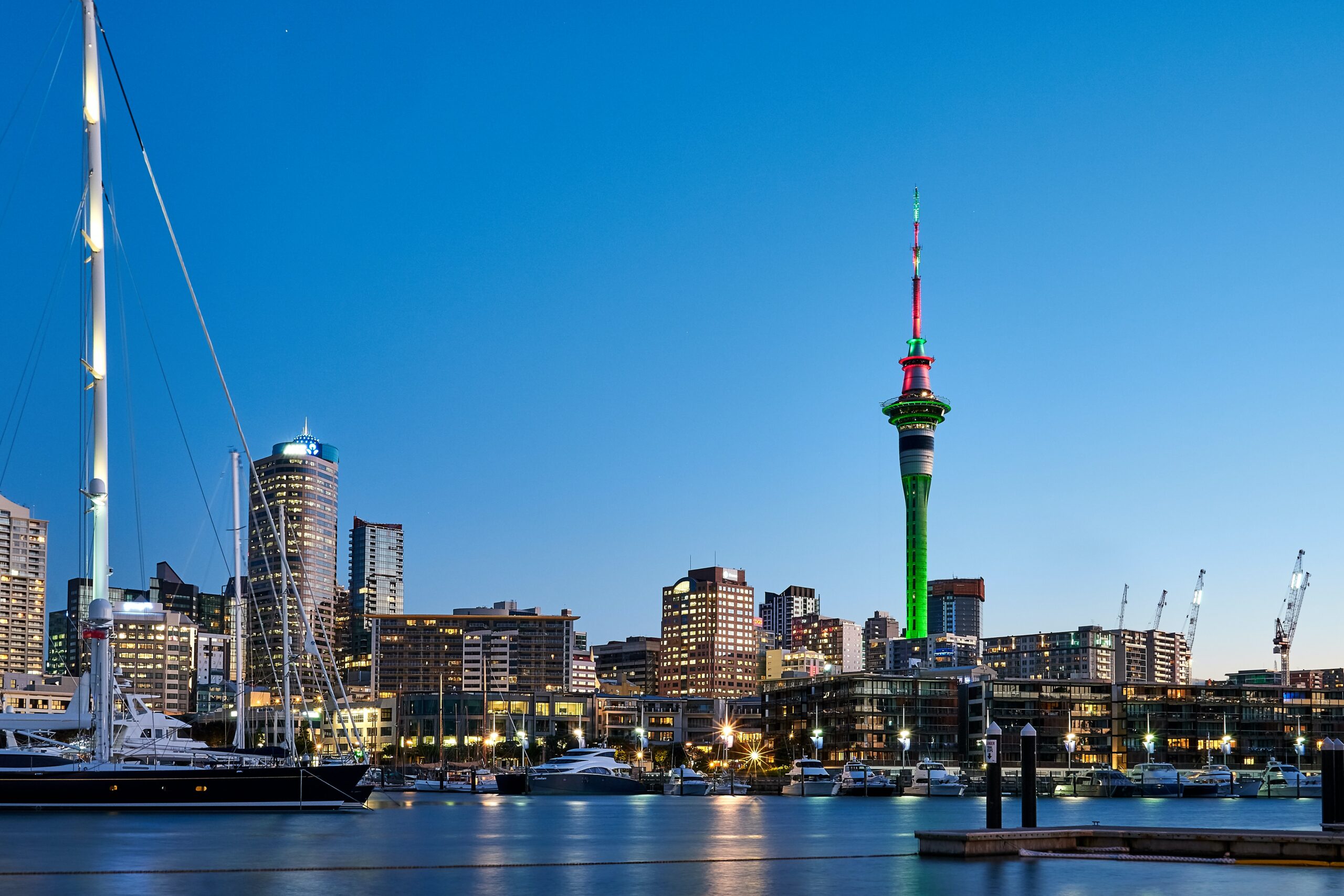