Yesterday was the dawning of a new more violent era by the Ardern regime. The tyrant deployed the strong arm of her jackbooted Police thugs, who used tear gas, pepper spray, batons, riot shields, rubber bullets, sonic weapons and fire hoses on peaceful protestors on the grounds of Parliament.

Not even Robert Muldoon, who had the Bastion Point protest cleared with Police, dogs and batons and used the full violent force of Police to attack protestors during the Springbok Tour, used tear gas on citizens. Yesterday the tyrant‘s blue shirts did just that.

Yesterday was the day the tyrant showed that “Kindness” was just a slogan. Her new “kindness” now involves tear gas and batons.

Her refusal to address the protesters, followed by an assault by the police on largely peaceful protesters and their property is largely to blame for this. But it was not just Ardern. It was all of the politicians.

Christopher Luxon could have gone out and spoken to them. It would have been a great moment for him, showing he was willing to talk and negotiate. Now we know the truth. He’s a cowardly elitist who deserves nothing but opprobrium. This is as much on him as it is on the tyrant he supported.

Whether Antifa-types were involved or not, the police actions today pushed people to their absolute limit and some cracked and pushed back. The tyrant had the temerity to then hold a press conference and blame the protestors. Talk about out of touch.

The protest was peaceful until the police moved in.

While she said police expected hostility, resistance and violence, “It is another thing entirely to witness it”. And boy did we witness it as the Police used tear gas fired into the crowd, pepper-sprayed media filming and used extreme violence and force while wantonly destroying property in an act of spite and vengeance.

The violence was perpetrated by Police on protestors, not the other way around. At times during the protest when Police stopped advancing, we never once saw protestors advance on Police.

Jacinda Ardern caused this when she created two classes of citizens: she demonised, ostracised and cancelled people for making a choice to exercise their rights under our Bill of Rights.

Ardern’s draconian policies are falling down around her. Her vaccine mandates, vaccine passports, vaccines, booster and lockdowns are all failing before our eyes. She can’t blame the unvaccinated for the huge outbreak as they were shut out of society.

This chart shows clearly that the vaccines, vaccine mandates, vaccine passports and mask mandates aren’t working. If they are working then explain all those vaxxed and boosted cases. You won’t be able to and neither can the tyrant.

But, like a true narcissistic tyrant who thinks she is not responsible, she stood there and declared that the people she marginalised as “Not Us”…they are them, the other people.

Yesterday we watched our democracy burn, and it was at the hands of the Police. If the tyrant thinks this is going to go away by bashing people and destroying what was left of their lives that her policies ruined, then she’d best think again.

She will literally have to hide now as people unleash ugly anger on an out of control tyrant who cannot see beyond her own lies and slogans. If she thought a few protestors heckling her at a school was bad, she hasn’t seen anything yet.

We are looking at an out of touch despot, desperately clinging to power through her mandates now violently enforced by the Police.

The Police have now destroyed any respect in them as they trampled old people, women and children. They tear-gassed people and pepper-sprayed children and journalists. They were the aggressors, and they can no longer be trusted. They abandoned their values and trampled our human rights. They disgust me.

Commissioner Coster should resign. It is obvious that he has been lying about wanting to de-escalate things, and instead plotted to visit hell on the protestors.

Jacinda Ardern and Trevor Mallard must go too. In fact, I hope the whole parliament is emptied of the cowards and quislings that infect the place.

Never before have I been so angry at a tyrannical government. I will do everything within my power to see the end of every party currently in parliament.

This is all on them. They should all be ashamed, but I suspect they will go full Biden and claim that the sanctity of parliament has been desecrated. The tyrant has already done that but, like dutiful lickspittles, so will all the others.

I warned you all that tyranny was upon us. Yesterday it visited complete with tear gas, pepper spray, riot shields, rubber bullets and batons. Tyrants never give up power easily, especially when they’ve seen how horrifically awesome using that power is.

They are all beneath contempt. They deserve nothing but derision. They must all go. 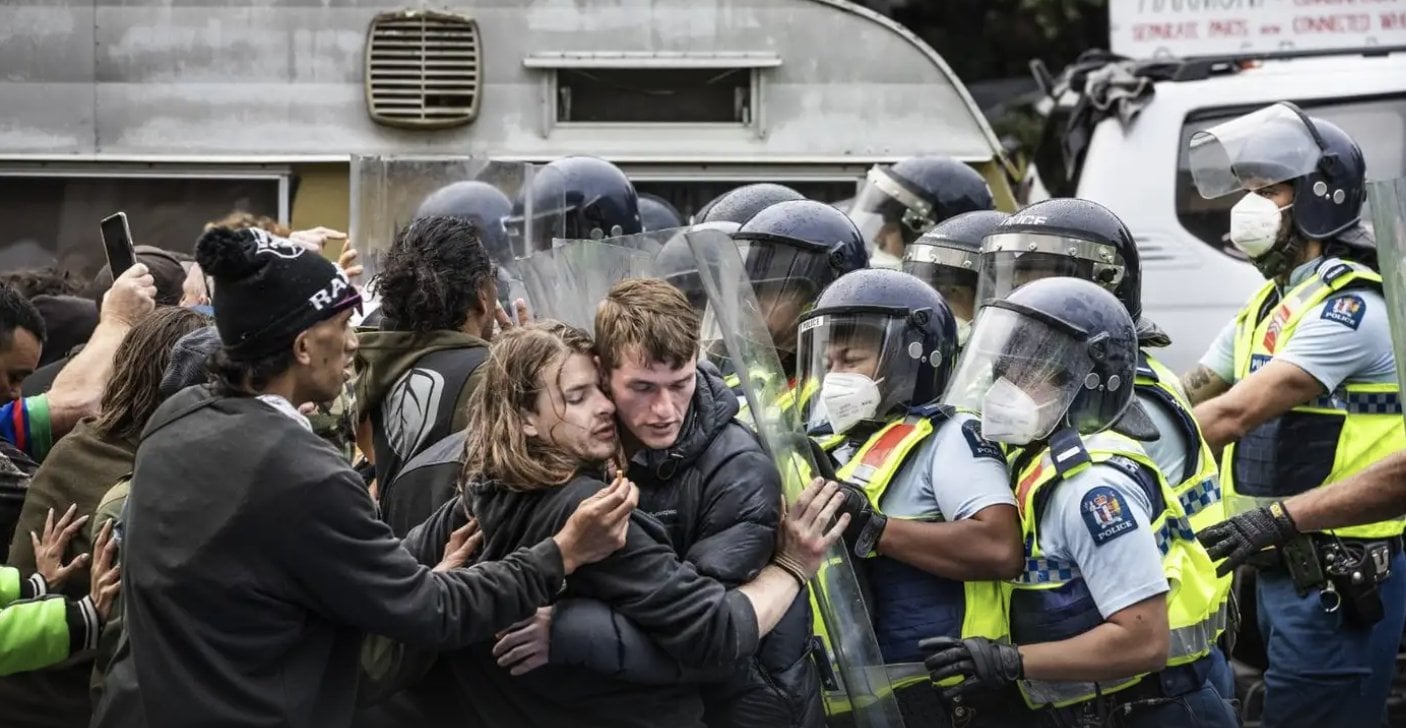