Be brave Prime Minister. Settle this.

The protest in Wellington is confusing the elites of the media and the politicians. They are arrogantly trying their best to ignore, belittle, denigrate and destroy the protest. Between the Police, the media the Wellington City Council, the political parties and Parliament they have tried their very best to make them go away.

None of it is working.

It is arrogant and petulant. Especially when you consider images like this from a 2012 protest on the streets of Auckland, complete with a guillotine and mock beheadings.

Make no mistake, not speaking to protestors because some people said mean things is not a valid reason. That is a cop-out, especially when we’ve had a history of protestors making demands with violent metaphors. Hell’s teeth what were the Springbok Tour protests if not violent?

Her next quibble was that the protest seems “imported”. Spare me, this is the same woman who led a march down Auckland’s streets protesting the legitimate election of a leader who is putatively an ally of ours. She didn’t mind blocking Aucklanders going about their legitimate business so she could womble her down Queen Street bedecked in knitted pussy hats.

She doesn’t mind disrupting others when it suits her. Never mind the “imported” protests that bedevilled the streets of our cities over the death of a black man at the hands of a police officer in a US City. How was that relevant to New Zealand?

What about her speaking to the hordes of school children who marched on parliament copying a spoilt little brat from Sweden? Was that “imported”?

She arrogantly dismisses the Wellington protest as not our kind of protest. What does she mean by that? Should they occupy private land for months on end like Ihumatao, and essentially blackmail the Government into a shabby little deal to upset decades-old Treaty Settlements? She didn’t have the guts to go talk to them in private, instead arranging a meeting at an Auckland Airport hotel, on the sly, entering via the back entrance. Don’t forget the Shelley Bay occupation is still underway. Protestors haven’t been moved on from that private land.

How about occupying other public lands, like Bastion Point, Motua Gardens and numerous other protests that went on for months or years?

The hypocrisy and arrogance are strong in this one.

Then we get the demands and the incredulous whimpering from Police, politicians and media, that they don’t understand what they are about, and there appear to be no leaders.

Well, you’ll never understand when you refuse to go down and listen to people. No, instead the elites hide behind the blue shirts of the Police, concrete barriers and fences. How very arrogant.

Ardern’s policies have destroyed lives, businesses, jobs, careers and all so she can boast about having the highest vaccination rates in the world. But this evil, arrogant out of touch woman refuses to engage, as do the media because the protestors aren’t acting as they expect.

These people, and I am one of them, have been treated abysmally by ALL political parties. Active discrimination is now apparent everywhere you go. All promulgated by the mandates.

The Prime Minister condescendingly says that mandates and segregation are “for our protection”. Well, we don’t need protection.

When politicians stop listening, when they belittle people’s legitimate concerns then they shouldn’t be upset when a significant number of them shout “enough”, and march to the very place that won’t listen to them.

They were never going to storm the parliament, that has become very obvious. There was barely any Police presence over the weekend, and yet the protestors respectfully stood behind the walls the elites erected as the arrogant Speaker beclowned himself with frankly petulant and at times dangerous and churlish behaviour.

And yesterday the Prime Minister again arrogantly dismissed the protestors, spreading her own disinformation and lies, ably assisted by the media. And they wonder why no one trusts them.

There are no leaders, there are a whole bunch of people angry at the way that they and their family members have been treated. The elites are scoffing, but the protestors are winning.

There are no leaders because everyone is there for their own personal, reasons. Some of which are heartbreaking

Yet the elites won’t listen.

Well, they will be made to listen. We’ve had enough, and we aren’t going away.

Congratulations Prime Minister, you created the Untermenschen with your mandates, you radicalised them deliberately by ignoring them and demeaning them.

Now you reap what you sow. This ends when the mandates end. You will have to do that sooner or later, but you will be removing them.

Remember in September 2020 when you said that they’d be no penalties for refusing the vaccine?

On Tuesday Prime Minister Jacinda Ardern went a step further, saying not only will there be no forced vaccinations, but those who choose to opt-out won’t face any penalties at all.

“No, and we haven’t for any vaccination in New Zealand applied penalties in that way,” Ardern told The AM Show, after being asked if there might be tax penalties or other sanctions for refusing a COVID-19 vaccine.

“But I would say for anyone who doesn’t take up an effective and tested and safe vaccine when it’s available, that will come at a risk to them.”

Was that a lie? Of course, it was, just one of many. Ardern claims that people voluntarily rolled up their sleeves, and that may be true for many, but she also mandated huge swathes of the population, and then sneakily sent out her commissars to coerce businesses that supplied the government by telling them that their contracts would cease if they didn’t mandate vaccines for their staff. She lacked the courage to come out and say it. She lied and obfuscated, and now claims 95% of people were happy with that.

She told them they’d be free when we reached 90% vaccination. That milestone was passed months ago, but the restrictions against all remain, and even more so against the unvaccinated. She lied then and she’s lying now.

Ardern doesn’t want to remove the mandates, because in doing so it exposes that it was never about health and was all about control.

That is all going to get destroyed by Omicron anyway. We are now reaching negative efficacy of the vaccines. That is when the rate of infection is far higher for the vaccinated than the unvaccinated. And if you don’t believe me then believe Radio New Zealand and their data analysis.

The unvaccinated are now the least likely to be cases, and the vaccinated are now dominating the cases. Those vaccines that she said, as recently as yesterday, would halt the spread of the virus clearly aren’t.

The Empress has no clothes anymore, and so the mandates remain, as it is all about control and was never about health.

People are marching and travelling to Wellington because she has lied and lied until she can no longer remember it is even there, but it is still there. Every lie she tells incurs a debt to the truth and sooner or later that debt is paid.

Jacinda Ardern needs to stop being the Marie Antoinette of New Zealand politics, and go and use some of that trademark empathy and kindness and sit and listen to the pain she has caused these brave Kiwis. Only then might we see a resolution.

Somehow I suspect she won’t do that, and this will drag on and on. If that happens there is no way out for the Government.

The problem all the politicians have is that they see this as a right versus left, peasants versus us, nutters versus sensible people, right thinking versus wrong thinking. It’s none of that.

Labour politicians used to march in the streets for human rights, now they send in the Police and pass laws to abrogate those human rights.

The National Party was founded to fight for individual rights, now they are hiding behind the voluminous skirts of the Prime Minister, and ACT ran up and down the country fighting for freedom of speech, but now treats people exercising their freedoms as shabby interlopers. The media used to speak truth to power, now they speak for the powerful.

The politicians and media have lost the moral right to govern. They truly have become the enemy of the people. The true Kiwi patriots in all this are those who are getting their feet muddy standing on Parliament’s lawn, fighting for rights that never should have been taken away in the first place, and should be restored immediately.

The fact that the majority of the population meekly surrendered those rights for the mirage of safety is moot. End the mandates now Prime Minister, show that trademark kindness and leadership your lickspittles in the media keep on claiming for you. If you don’t you will go down as the worst Prime Minister in history, and when you look at Robert Muldoon’s record, that really takes some beating.

Be brave Prime Minister. Settle this. 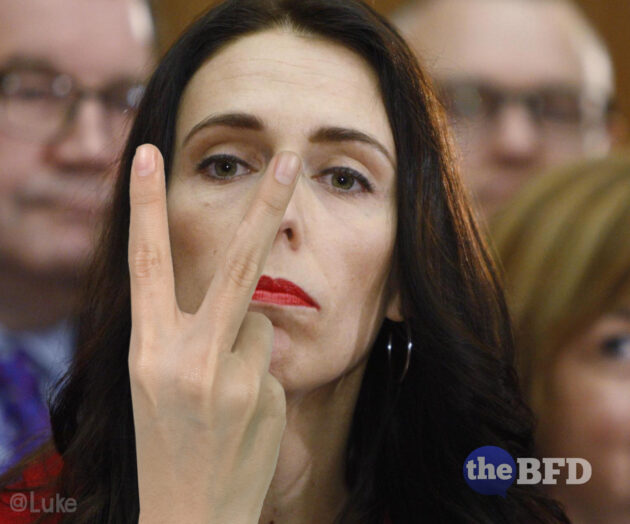