Dr Muriel Newman established the New Zealand Centre for Political Research as a public policy think tank in 2005 after nine years as a Member of Parliament. A former Chamber of Commerce President, her background is in business and education.

Last weekend Stuff offered a glimpse into the future, through an article investigating the co-governance of the former Urewera National Park.

This arrangement was put in place by John Key’s National Government in 2014 as part of a Treaty of Waitangi settlement with Tuhoe.

It’s an indication of what “Aotearoa” would look like under Labour’s He Puapua “partnership” agenda, where Maori are elevated into a ruling class, with everyone else relegated to second-class citizenship status.

Under co-governance partnerships, tribal representatives gain a controlling interest in decision-making – and the right of veto. Any pretence of democratic rule in the public good, is an illusion.

Under the Te Urewera Act, the National Park was given a “legal personality”, which means that while no-one owns it, the Crown retained the assets – including huts, camping grounds, bridges, boardwalks, and a Holiday Park.

A co-governance Board of nine – six from Tuhoe and three representing the Crown – was established as “kaitiaki”, or guardians, with authority over how the Park is used. In essence, there were three key objectives: reconnecting Tuhoe with the Park, protecting the biodiversity of the area, and ensuring public access.

So, what did the article reveal?

It began, “Lake Waikaremoana is considered the jewel of Te Urewera, the homeland of the Tuhoe people. It’s also home to one of the 10 ‘Great Walks’ and has been enjoyed by generations of non-Tuhoe. But the lake – and the whole of Te Urewera – has been closed for several months, and facilities have fallen into disrepair.”

It describes how public access is being denied – including to people who own boats moored on the lake. Rusty tractors and broken-down Department of Conservation trucks are being used to block boat ramps, and barricades have been set up across roads and tracks.

A Police Sergeant who had recently worked in the area described the shocking state of disrepair of facilities – huts vandalised, “with condoms and human waste left on the floor, gang slogans drawn on the furniture and slats from the bunks used as firewood… guttering pulled down or collapsed and empty water tanks… thousands of dollars’ worth of pest traps unused and rotting on the ground.”

Tuhoe has been receiving $2.2 million a year as a “base amount” to maintain the Park. Additional funding is available for special projects – such as when new stoves were installed in many of the huts.

But Tuhoe hasn’t allowed Department of Conservation staff to access the area for maintenance work and pest control, claiming instead that they would do it themselves. Those piles of rotting traps, however, reveal the truth that the lofty “kaitiaki” claims of Maori being the true ‘guardians’ of New Zealand’s natural heritage, are nothing more than a fabrication.

The legality of Tuhoe’s lockdown of the park is now being challenged. But Tuhoe leader and Board Chairman, Tamati Kruger, maintains they have the authority to do so. He explains that public access is “way down the list of priorities for Tuhoe, as it brings no benefit to the iwi… Tuhoe wants to put its efforts… to the first purpose of the legislation, which is the re-connection of Tuhoe with Te Urewera.”

And that in a nutshell is the fatal flaw with tribal co-governance. It’s an arrangement that replaces democratic accountability with authoritarian rule by a tribal elite that is focused on their own best interest, and cares little for the public good.

These revelations exposing the deterioration of our former world famous National Park should send a chill down the spine of anyone who believes that Jacinda Ardern’s plan to implement He Puapua – the blueprint for the tribal co-governance of New Zealand by 2040 – would be good for the country.

Co-governance is the antithesis of democracy. While democracy operates in the public good, giving everyone the opportunity to get involved and hold elected representatives to account, tribal rule prioritises greed and self-interest.

It is not hard to see the motivation for the iwi power grab that is now underway. Through the power to control decision-making, co-governance delivers lucrative rewards – a royalty here and a pay-out there can easily be justified and orchestrated when you call the shots.

And the stakes are huge – already, thanks to taxpayers, post-settlement Treaty assets held by iwi corporations are worth almost $10 billion. But while tribal rulers and their associates live privileged lives, as a result of the elitist class structure of tribalism, other tribal members continue to live lives of hardship and deprivation.

Jacinda Ardern’s obsession with co-governance can be seen in the fact that the Pae Ora Bill, to replace democratically elected Health Boards with an apartheid system controlled by Maori, is being rammed through Parliament during a crisis, when an ill-equipped health service is desperately trying to ready itself for an expected tsunami of Delta cases.

The PM’s obsession can also be seen in her determination to ignore widespread opposition and force through her disastrous Three Waters proposal to replace democratic control of local government water infrastructure and services with tribal control. The Bill is expected to be tabled in Parliament any day now, with submissions called over Christmas, so it can be rushed into law early next year.

What is particularly galling is the fact that not only did Jacinda Ardern seek no mandate from voters to replace democracy with tribal rule, but she deceived the public by campaigning on moderate policy promises, that were radicalised, once she realised she could govern alone.

What Prime Minister in her right mind would even consider delivering the effective privatisation of critical public assets and services into the hands of a powerful and self-interested tribal cabal, who cares nothing for the rights or concerns of other New Zealanders?

Meanwhile, Jacinda Ardern’s He Puapua agenda is permeating all areas of society.

It can be seen in a lucrative money-making scheme for the Maori elite that is being set up in the Plant Variety Rights Bill, which is presently in front of Parliament.

New Zealand is widely admired for its ability to add value to native plant varieties, including creating medicinal products that are used around the world. A key part of that success has been the open and transparent process for obtaining the rights to utilise plant varieties that has been in place since 1987 and has provided certainty for businesses and investors.

But that is about to change.

When the Comprehensive and Progressive Agreement for Trans-Pacific Partnership trade deal, entered into force on 30 December 2018, New Zealand was given three years to update our plant variety rights compliance regime. We could either adopt the 1991 international convention that was used by most of the other countries, or we could change our own law to “give effect” to that convention and include measures to fulfil Treaty of Waitangi obligations.

The Ministry for Business, Innovation and Employment issued a Regulatory Impact Statement proposing to update the existing law to align it with the international requirements, and to include Treaty of Waitangi provisions that take into account the Waitangi Tribunal’s Wai 262 recommendations.

Wai 262 is the 2011 Waitangi Tribunal report into the long-standing flora and fauna claim. It recommended that as “kaitiaki” or guardians of treasured native species or “taonga”, Maori should not only have their rights protected in law, but they should be able to derive benefits as well.

Tuhoe, of course, has shown how well that works!

In 2020, after the He Puapua report had recommended that “Wai 262 becomes an important subset of the wider work required to ensure that Aotearoa is meeting its obligations under the Treaty”, the Ardern Government allocated $6.5 million to a work programme to develop Wai 262 requirements.

Accordingly, the Plant Bill recommends the establishment of a “Maori Plant Varieties Committee”, to consider Wai 262 requirements: whether applications for plant variety rights affect ‘taonga’ species and ‘kaitiaki’ relationships – and if so, what ‘mitigation’ could be applied.

In other words, under the new plant rights legislation, Maori would become gatekeepers  – to be consulted, and remunerated, no doubt in such a way as to clip the ticket on the sale of products derived from their “taonga” species.

Introducing lucrative Wai 262 benefits for Maori, that enable them to profiteer from the work of others, also applies to research.

Using the same Wai 262 Waitangi Tribunal rationale, new guidelines are being developed for the involvement of Maori in research involving ‘taonga’ species: “Kaitiaki need to be involved in decisions about future uses of the information and data generated from any of these projects to ensure Maori have the opportunity to benefit from the value created… to deliver the best outcomes for Maori.”

With its significant funding base, research into ‘taonga’ species looks set to become another lucrative funding stream for tribal leaders. In fact, an earlier draft of the guidelines, obtained by the NZCPR – see  HERE – reveals just how lucrative this could become, with the given examples covering museum specimens, pine trees, manuka honey, and data, to name just some of the six distinct areas of opportunity outlined:

International trade is also being captured by Wai 262. The recent trade deal with the UK includes new Treaty obligations associated with Wai 262, as well as intellectual property – including cultural expressions.

One such cultural expression that was mentioned in the UK trade deal announcement was a haka, as this week’s NZCPR Guest Commentator, author and historian Paul Verdon explains:

Paul reminds us that Te Rauparaha was responsible for a massive loss of life, and concludes, “I fail to see what makes the actions of a pathological monster acceptable in decent, modern New Zealand society – and now acceptable to Britain, whose 1840 Treaty of Waitangi halted most of the death, destruction, enslavement and cannibalism that had consumed Maori for many decades before.”

Jacinda Ardern’s He Puapua plan for tribal control is now infiltrating more and more areas of life in New Zealand. We are relentlessly moving towards a point where surely we need to say enough is enough and demand our country return to being the colourblind society that we once held dear.

*Do you agree that Maori should be given special rights and privileges as the “guardians” of New Zealand’s flora and fauna? 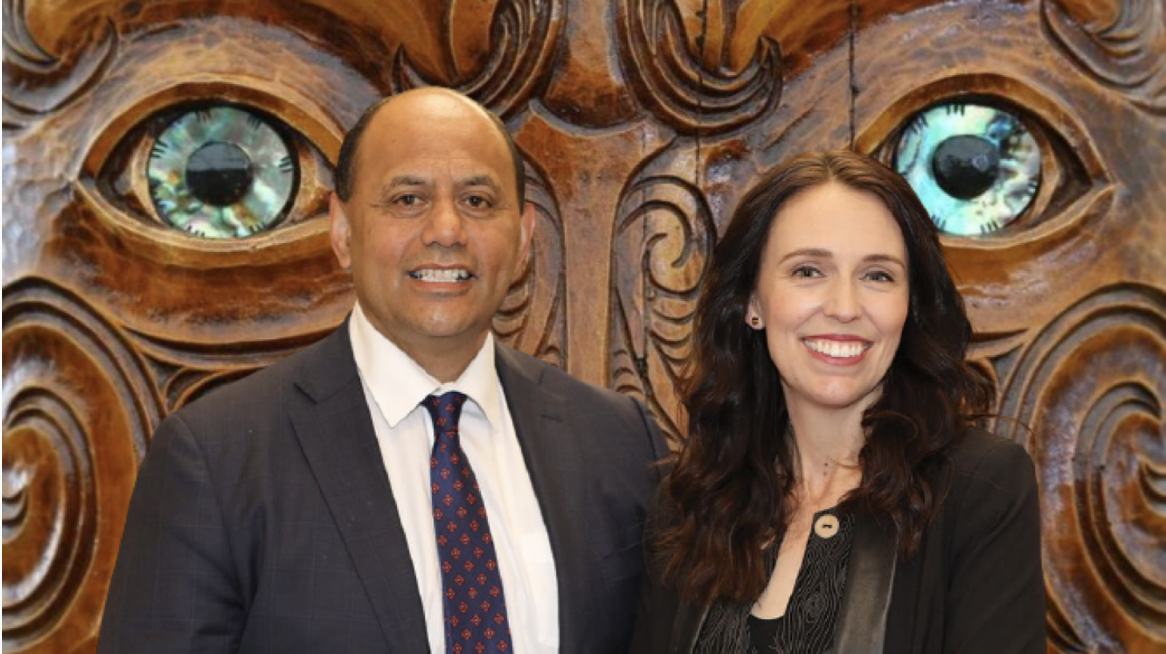