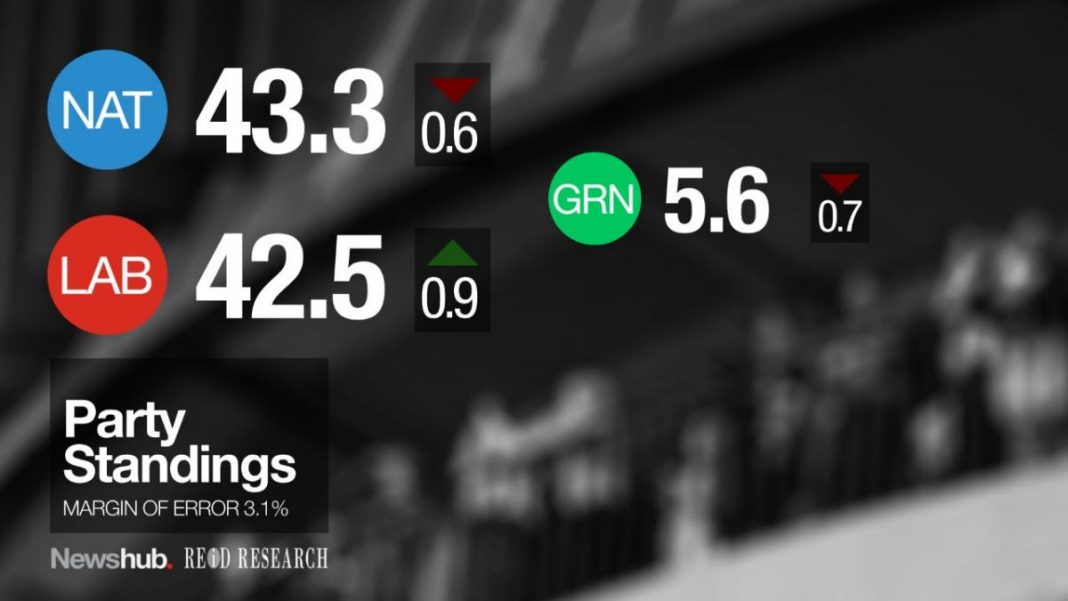 The latest Newshub/Reid Research poll is out. It was taken before Simon Bridges went all-in against NZ First. The numbers show that National + ACT doesn’t beat Labour + Greens.

This year’s election is shaping up to be all about mates – who has friends and who doesn’t.

Our latest Newshub-Reid Research poll sets the scene this election year – and what a scene it is. National and Labour have never been this close in our poll’s history.

And because the two major parties are neck-and-neck, they are going to need all the help they can get.

This is a taser poll – sending a jolt to all the parties. It’s a wake-up call that this election couldn’t be closer – a thriller decision 2020.

National slipped slightly to 43.3 percent – down .6 percent. It’s still the country’s biggest party but only just.

But the difference between winners and losers can be good mates and Labour has them.

The Greens get 5.6 percent – down 0.7 percent. They’re getting closer to the danger zone, that 5 percent threshold parties need to get into Parliament.

The Nats have a much smaller crew to depend on but ACT keeps gaining popularity. They’re on 1.8 percent, up .4 percent.

On this poll NZ First would be out of parliament anyway, and their 3.6% would get redistributed evenly between National and Labour. That still doesn’t help National, they would still fall short and Simon Bridges’ gamble will have failed.

On these numbers NZ First could easily make a credible claim that in order to stop a Labour/Green government soft National voters should build a buffer against that by voting NZ First. No other argument matters as Bridges has ruled out any sort of deal with NZ First.

Tradition matters though with the propensity for the larger parties to slide in the final weeks of the campaign and the smaller parties gain at their expense.

National needs a bigger catalyst in order take votes off Labour, which realistically is the only place they can get them. That is where National is at a disadvantage because even though Simon Bridges has managed to hit 10% in the preferred Prime Minister stakes it still won’t help him to gain the big seat. Maybe National is going to have to campaign without a photo of the leader on their billboards.

On these numbers National will still be in opposition and we would be looking at Marama Davidson as a minister or even the Deputy Prime Minister.

Reports are that 1News is polling this week so expect another poll soon.