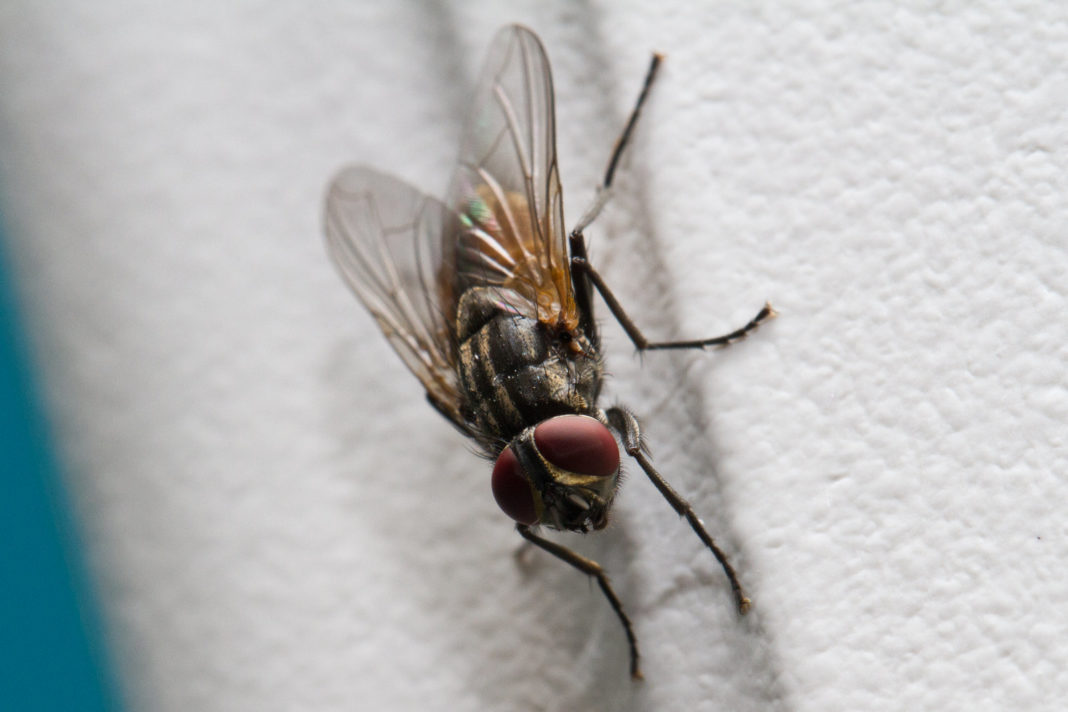 A report on the test of the Mark 2 model spy fly, with improved battery life, enhanced adherence qualities (enabling ceiling adhesion as well as wall), and reduction in size from that of a giant bumblebee to a largish blowfly.

The test took place in the office of the Minister of Finance, Grunt Robbingson, on the occasion of another of the Prime Minister, Justinda Ardeau’s regular meetings with the Minister. Your intrepid eye-witness was tuned in and watching to see how the Mark 2 performed.

[Editor’s Note: This transcript has been translated into English from the Justindaese to render it comprehensible and in respect to those who suffer from high blood pressure].

Justinda: Hi Grunt. I’m really furious this morning, Grunt. Slime Magazine gave Life-Form of the Year to that Margaret child, instead of to me. Can you believe that? How dare they! I was sure that they would make me the Life-Form of the Year but that Gretel child beat me again. I’d like to cut off her stupid pigtails and strangle her with them. What do I have to do to get the better of her? Do I really have to hitch-hike everywhere by yacht, Grunt, as well as wear my hair in pigtails? Or do we have to make a really gigantic war canoe and get a few hundred guys… ooops I mean *qwerties, to paddle me everywhere? *[Editor: I believe that she means a mixture of all 794 genders.]

Grunt: There there Justinda, don’t be upset. The war canoe would take too long to make using stone adzes, and you’d be in trouble for cutting down a really big tree. You just have to wait out this world-wide obsession with Gretel. There’s a huge marketing push for her at present, and Uncle Georgie is right behind her. When they’ve made enough money out of her and people start to realise that she’s only an exploited kid who is just acting a part, then they’ll dump her and move on to someone else. Why wouldn’t that be you?

Justinda: (stamping her foot loudly). But Grunt, I’m worried that it’s going to take too long. What if there are no more disasters that can get me in front of the cameras hugging people? You can’t just hug everyone you see without people starting to think you’re not sincere. There has to be a reason to hug people. I mean this in the nicest and most well-being oriented way, Grunt, but we need more disasters where people can be hugged.  And I hate the fact that she can actually see CO2. That’s really annoying. I’ve tried and tried for hours to see it, Grunt, but still I can’t. I’ve watched Clarkie breathing when he’s asleep looking for CO2, but nothing. I can smell plenty of methane, but I can’t even see that either. I need to see CO2 and methane, then I would be one up on her.

Grunt: Are you sure that you really believe that she can see invisible gases, Justinda?

Justinda: Grunt, I’m really surprised at you. The media reports that she can see CO2 and you know that they would never…. Oh I see what you mean, Grunt. Maybe she’s just pretending she can see it.

Grunt: Aha, your rapier-like mind is on to it Justinda. Are you, or are you not, a better acting-type person than Greta?

Justinda: Well, I have to say that I’m pretty good, Grunt. I’ve managed to get a lot of people to think that I’m doing a really good job. And I think my concerned face look is really fulsome, even though it makes my face ache sometimes after a few hours of it.

Grunt: That’s true. But don’t forget that you’ve made quite a few Captain’s calls based on the opinions of children. Gretel is a child too, so maybe she’s worth listening to.

Justinda: Heh heh Grunt, now you’re trying to trap me. I’m not stupid, Grunt. We all know that the letters the children write to me are just the opinions of their teachers, so I’m not actually implementing the children’s’ ideas, but their teachers’, and it’s well-known that just about all teachers love me. Also, the future voters, or rather children, all think I’m wonderful for obeying their wishes. If only we could give the vote to 8-year-olds, Grunt. In fact, I might have a chat to Andy about that, or maybe I’ll just make a Captain’s call on it.

Grunt: But getting back to seeing invisible gases, combined with your acting abilities…

Justinda: Yes, I see possibilidies here. If Gretel can pretend to see invisible gases, then so can I; and why stop at CO2 and methane? Yes Grunt, why, I believe that I can also see nitrogen and hydrogen. Yes, I can do this. In fact, I can see these gases so well that it’s a bit hard to see across the room. Oh Grunt, that’s a lot of methane around your chair, it’s bright green in colour.

Grunt: Hmmm, don’t overdo it Justinda, but you’re getting the idea. I think maybe you should make an announcement about this soon.

Justinda: Yes, I will. Maybe in the New Year when everyone is back from holiday I’ll make an announcement that I can see CO2 and methane and hydrogen and nitrogen. Wow, I’m so excided about this Grunt. I think that Gretel is going to be so angry. I’m sure to get a Nobel prize, and Slime’s Organism of the year award. I’ll be on so many covers. And don’t forget, Epstein didn’t kill…

Unfortunately at this point, the transmission failed as the fly’s CPU over-heated and burnt out in a puff of smoke (that Justinda didn’t see). As usual, your intrepid eye-witness cautiously proceeded home, keeping a sharp eye out for Justinda’s increasingly unkind kindness and well-being police and making plans for a more robust fly CPU.

Weekend of GANG Violence Shows Need to Get Tough