Skip to content
A plan to light the Shrine in "Pride" colours stoked outrage. The BFD. Photoshop by Lushington Brady.

Once again, Melbourne’s Shrine of Remembrance is at the centre of a political storm. At the heart of the storm, once again, is CEO Dean Lee.

When Lee announced a plan to light the Shrine up in “Pride” colours, the reaction was swift and furious. Large swathes of the public were united with veteran’s groups in opposing the move.

And it seems that, once again, Dean Lee, who was appointed by the Andrews government in 2015, is making outrageous accusations without proof.

In September last year, Melbourne was in the grip of the World’s Longest Lockdown. Furious protests, led by workers, broke out — and the Andrews government responded with shocking brutality. Teargas, truncheons, rubber bullets, even military vehicles supposedly reserved for counter-terrorism action, as well as a no-fly-zone.

When Freedom protesters rallied at the Shrine of Remembrance, police quickly responded with teargas and rubber bullets. The government and media responded with hysterical denunciations.

At the centre of it all was Dean Lee. Lee accused the protesters of “desecrating” the Shrine. Protesters were accused of littering, and, worst of all, “urinating on the Shrine”.

The only evidence for the first charge was the litter of discharged teargas canisters and rubber bullets, as well as signs dropped in the panicked flight. Prior to the police attack, livestream video showed protesters diligently collecting litter and cigarette butts. But the evidence for “urination”? None. Just Dean Lee’s say-so.

Police Media have denied they have received reports of alleged threats made to Melbourne’s Shrine of Remembrance staff after CEO Dean Lee told reporters that plans to light up the war memorial in ‘pride colours’ were abandoned due to the threats.

It follows Rebel News‘ exclusive report on Sunday revealing that the Victoria Police officer in charge of security at the site refuted Lee’s claims.

The officer informed reporter Avi Yemini that the decision was, in fact, made due to widespread public backlash against the move and not threats of violence and abuse levelled at Shrine staff.

This appears to directly contradict Lee’s claim that “where those threats are of significant concern, they have been referred to Victoria Police”.

The mainstream media have continued to repeat Lee’s claims without verifying the allegations with dozens of stories and reports flagging serious concerns over the welfare of staff and fueling outrage on social media by stoking tensions within the queer community.

7 News even reported on Sunday that police had ‘launched an investigation into the threats’; however, Rebel News can reveal that no police investigation is currently underway.

The “rainbow” lighting plan was part of an exhibition at the Shrine, on “Defending with Pride”. Lee admits that public response was “overwhelmingly opposed”.

The RSL is also opposed. Its Victorian president, Robert Webster, called it “inappropriate” and that he is pleased the event was cancelled. Webster says he was told that “10,000 veterans [converging] on the Shrine forecourt making sure it wouldn’t happen”.

More importantly, the exhibition and lighting display contradict Dean Lee’s own statements about the purpose of the Shrine: 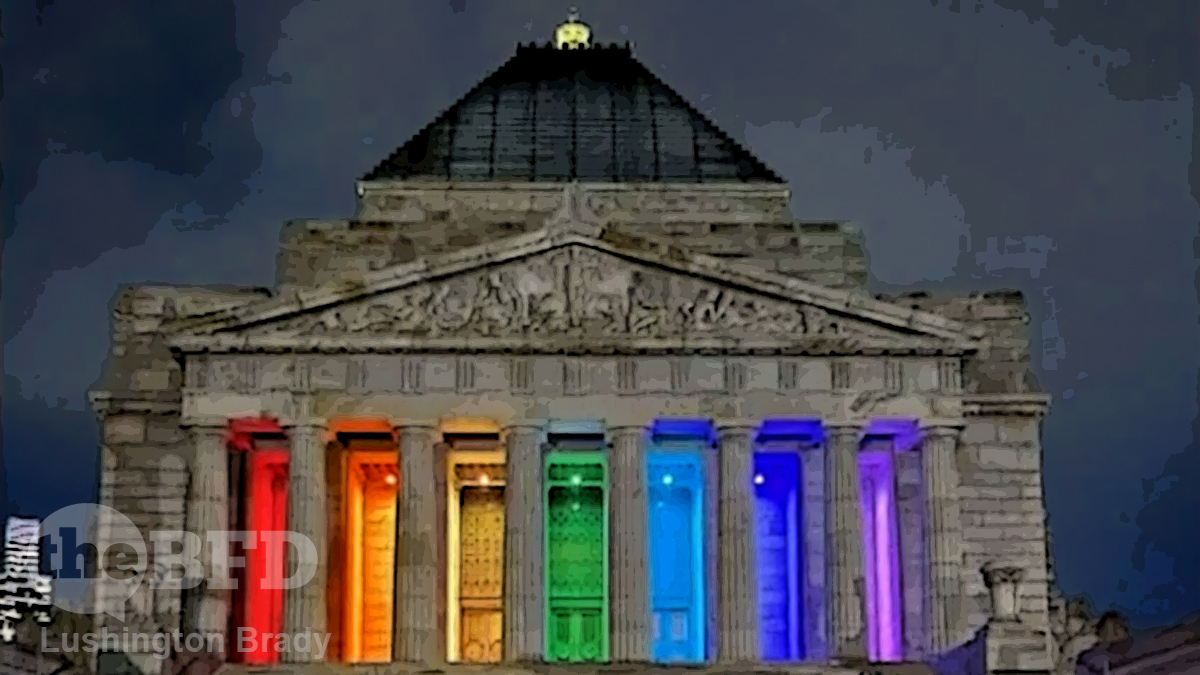