Skip to content
How Jacinda is tackling child poverty. The BFD.

Combating child poverty, New Zealanders were told, “Has been a lifelong cause for Ardern and is the reason she entered politics aged 17.” It was a key theme of her initial prime ministerial campaign. Lest anyone mistake how important reducing child poverty was, Ardern declared that “This government will put child poverty at the heart of government policy development and decision-making.” To really drive the point home, she appointed herself the Minister for Child Poverty Reduction.

So, how’s that worked out?

Well, a newly-released report on The State of Child Health in Aotearoa NZ bluntly declares that:

On many measures, New Zealand is currently one of the worst places in the developed world to be a child.

Kiwis should be “really ashamed” of the health outcomes of children in poverty, Cure Kids say […]

The charity’s 2021 State of Child Health in Aotearoa New Zealand report, released on Wednesday morning, found the rates of dental disease, respiratory conditions, skin infections and rheumatic fever remained too high among children in the country compared to other developed nations.

So, five years in and her policy be-all and end-all is a complete farce.

Data from 2019 revealed 41% of five-year-olds had evidence of tooth decay, that rates of tooth decay and hospitalisation were consistently the highest for Pasifika and Maori, and those living in the most deprived areas had three times the number of tooth extractions as those in the least deprived areas.

But, to damn Ardern with the weakest of excuses, you can’t help those who won’t help themselves — or their kids.

“Why does a kid who grows up in Remuera with a sore throat not go on to have rheumatic heart disease? Whereas a child less than 10 kilometres away who has a sore throat ends up with major heart problems?” Cure Kids CEO Frances Benge told Breakfast […]

“Mum and dad are working really hard. They might be making the sacrifice of ‘Johnny’s got a sore throat. Do I take him to the doctor or do I put a meal on the table?’ They’re the sorts of decisions that parents are having to make.

It literally is not: “All children under 13 are eligible for free general practice visits, both during the day and after-hours”. If Mum and Dad really are working very hard, there’s presumably nothing stopping them paying for a visit. If they’re not working, “If you’re visiting a general practice where you’re not enrolled, you’ll pay less if you have a Community Services Card. Community Services Card holders also get cheaper visits at the general practice they’re enrolled with. This also applies to injury-related visits at most practices, which are covered by ACC.”

Meanwhile, Jacinda Ardern has to explain to New Zealanders how she’s so comprehensively failed at the signature task that she staked her prime ministerial reputation on.

Kidscan, a charity that provided essentials to Kiwi kids affected by poverty, had never seen things get so bad before […]

Chapman said she had heard stories of people going without food, families on their last $20, early childhood centres doing laundry for families who couldn’t afford the laundromat, schools having to pick up students from home because of fuel costs, and a family living in a shipping container.

So, what does Ardern have to say? Well, she’s too busy taking selfies and sneaking into schools to try and evade protesters. So it was left to one of her gaggle of incompetent ministers to run cover for their incompetent prime minister.

On Tuesday, the Finance Minister acknowledged things were tough. Grant Robertson said that was why the Government had put in place a range of support.

Well, they’ve had five years to tackle what Ardern herself nominated as her biggest priority.

Instead, it’s got worse.

Kiwis are well entitled to hold her to account, all right. 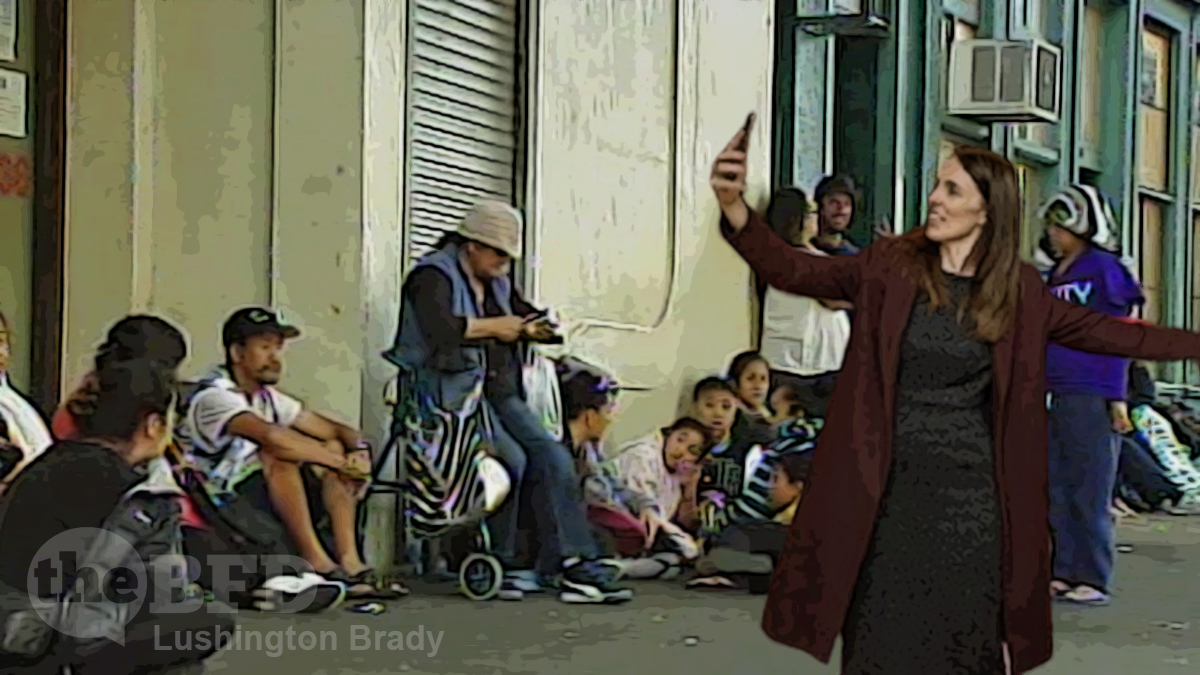