On his Bowalley Road blogsite, Chris Trotter raises the possibility that Jacinda will resign before Christmas. The reason he believes this is possible is obvious – COVID, particularly the Delta kind. Chris Trotter’s article is as well written and researched as we have come to expect of him, but I disagree with him on many counts. So, sorry for getting your hopes up there, but I think it is extremely unlikely.

MATTHEW HOOTON has raised the possibility of Jacinda Ardern being gone by Christmas. He puts forward the scenario (Paywalled) of New Zealand becoming as debilitated and beleaguered by Delta as New South Wales and Victoria. With the number of community cases surging above a thousand every day, the hospitals overwhelmed, and people dying for lack of ICU beds, Hooton insists that not only would Jacinda be obliged to go, but also, being a fundamentally decent person, she would want to go. The unfolding Covid disaster being of her making, the Prime Minister would see it as her moral duty to resign.

Sadly, Hooton’s scenario is by no means preposterous. Were New Zealand to be overwhelmed by the Delta variant of Covid-19, the Prime Minister and her government would have to accept that the disaster occurred on their watch. Jacinda and Chris Hipkins, her Covid Response Minister, would have no choice but to resign. The Right would, of course, be delighted at this turn of events, and the Left devastated. New Zealand would be in an ugly, truculent, mood. Many people would be very frightened. The future would be bleak.

Personally, I would see the silver linings in a Jacinda-less future but he is right that the nation would be in an ugly mood. Having endured 8 weeks of full and partial lockdowns only to see case numbers rising each day, there is room for truculence. There is room also for weariness and despair. This will be the best part of two years of people’s lives damaged by lockdowns, and all for nothing. Kids have missed two years of school. Patients have had treatments postponed, which eventually will cause more deaths than COVID ever did. People cannot get home, they cannot visit relatives and they cannot hold funerals. The state of mental health in this country is a widely kept secret, presumably because the government refuses to front up on the damage that lockdowns are causing. So much has been sacrificed on the altar of COVID… yet the case numbers rise every day.

Most New Zealanders would identify the Trans-Tasman Bubble as the culprit. The whole idea was fraught with the most awful potential for disaster. Opening our borders, even to the Australians, was seen (by what the pollsters told us was a majority of the population) as an unnecessarily risky proposition.

Most Kiwis saw the Bubble as the product of incessant lobbying by the tourism and hospitality industries – egged-on relentlessly by the news media. Put to a vote, the proposition would, almost certainly, have been defeated. That Jacinda and her colleagues scorned the backing of the people, and succumbed to the pressure of vested interests, was taken, by her followers, as a very bad sign.

I can’t agree with Chris Trotter here. The Trans-Tasman bubble was closed more often than it was open and I do not believe that a majority of New Zealanders were against it; on the contrary, we saw it as a sign that the smug hermit kingdom was beginning to acknowledge that the rest of the world still exists. We were the ones who had ‘eliminated’ COVID, remember, so we smugly believed that the virus had waved a white flag and left our shores for good.

How arrogant that view turned out to be.

As for the media, it is laughable of Chris Trotter to blame them for anything when they kneel breathlessly at Jacinda’s feet, hanging on her every word, and hanging even more on her next handout of taxpayers’ dollars. The NZ media are bought and paid for by the government. They can do nothing more than lick Jacinda’s boots.

Inevitably, and as a huge number of Kiwis had predicted from the outset, those two decisions: to establish the Bubble; and then to bring the travel-gamblers home; brought the Delta variant of Covid-19 into New Zealand.

I was certain that the arrival of the Delta variant was the result of (yet another) MIQ failure, so it is unfair to blame the Trans-Tasman bubble. The bubble had been closed for some time before the latest outbreak happened because of increasing case numbers in Australia. MIQ, however, had existed at all levels all the way through lockdowns.

At first, Jacinda still appeared to know exactly what to do: Go hard. Go early. The world laughed at New Zealand: hurling itself into a draconian lockdown in response to just one community case seemed wildly excessive. But its citizens were quietly proud of their leader’s decisiveness. This was their country’s extraordinarily successful “elimination strategy” at work. This was how you “stamped-out” the virus – by staying home and staying safe.

I wasn’t ‘proud’, and I don’t know anyone who was. My attitude was more along the lines of, “18 months on and we are back to this? We have learned absolutely nothing in all that time.” Most of us, having seen the ravages of Delta in other countries, already knew that ‘elimination’ was nothing more than a pipe dream – or, should I say, more appropriately, a fairy tale.

It was at this point that the business community and the news media, confident that the Prime Minister and her colleagues could be spooked into doing exactly the wrong thing, unleashed a no-holds-barred campaign to abandon the elimination strategy. By “learning to live with the virus”, said the business community (ably assisted by their political and media mouthpieces) New Zealand could once again open itself up to the world. As soon as 90 percent of Kiwis got themselves vaccinated, the whole country would be able to relax and settle into a new normal.

So Chris is suggesting that we should stay locked down until 95% are vaccinated? That figure is unachievable. There are anti-vaxxers, people advised against vaccination by their doctors, those who are uncertain, those who don’t trust the government… and on it goes.

Britain has vaccinated only about 65% of their population and the USA has managed about 56%. Does Chris really think we are going to break all those records? I doubt it. Other countries have already shown us what we are now experiencing first-hand: there is no alternative to ‘learning to live with the virus’. We can keep stamping it out and it will keep coming back until there is no economy left to ruin and until everyone who is capable of leaving this place has already gone.

I have noticed that those on the left, generally speaking, are much more likely to just go along with what the government tells them to do. Maybe they are all just communists-in-waiting, but it seems to be only conservatives who object to the loss of freedoms. As he is a strong advocate for freedom of speech, I am surprised at the extent to which Chris Trotter is prepared to forgo freedoms in order to pursue the elimination strategy. Does he think it will actually work though? No one else does. Not even Jacinda.

Chris may blame the media, but it is more likely that Jacinda’s decision to drop Auckland to Level 3 was driven more by polls than anything. She knew she was losing her ‘team of 5 million’. She knew people were weary of lockdowns, and she knew questions were being asked about the wisdom of her strategy, which was just to do the same thing over and over again… also known as the proverbial definition of madness.

Jacinda will not step down though. The Labour Party knows that she is their best weapon. People love her, although the gloss is beginning to fade these days. I have friends who constantly say how ‘lovely’ she is, but they don’t seem to realise that, in a global pandemic, we don’t need ‘lovely’, we need competent. They treat her like a doll or a favourite grandchild. She is neither of those things. She is the one charged with leading us out of the pandemic and into a future where the country has not been bankrupted. Right now, I would say she is not doing particularly well on either count, but that is all that ‘lovely’ will ever get you.

Labour knows it will be in big trouble without Jacinda. Who will take over? Grant Robertson? Jolly enough, but lacking in general appeal. Chris Hipkins? David Parker? Good grief… their polling will drop like a stone, and they know it. That is why they have to keep Jacinda where she is.

And I have to disagree with Chris’s description of Jacinda as a ‘fundamentally decent person’. Maybe she was, once, but power goes to the head, and no one can deny she has thoroughly enjoyed the adulation she has received so far. As it wanes, as it has already begun to do, we may see her decide that she has had enough, but I doubt if that will happen within the next few months.

But maybe I’m wrong. Maybe Jacinda will step down before Christmas. After all, Chris Trotter did not specify which Christmas… did he?

Please share this article so that others can discover and enjoy The BFD. 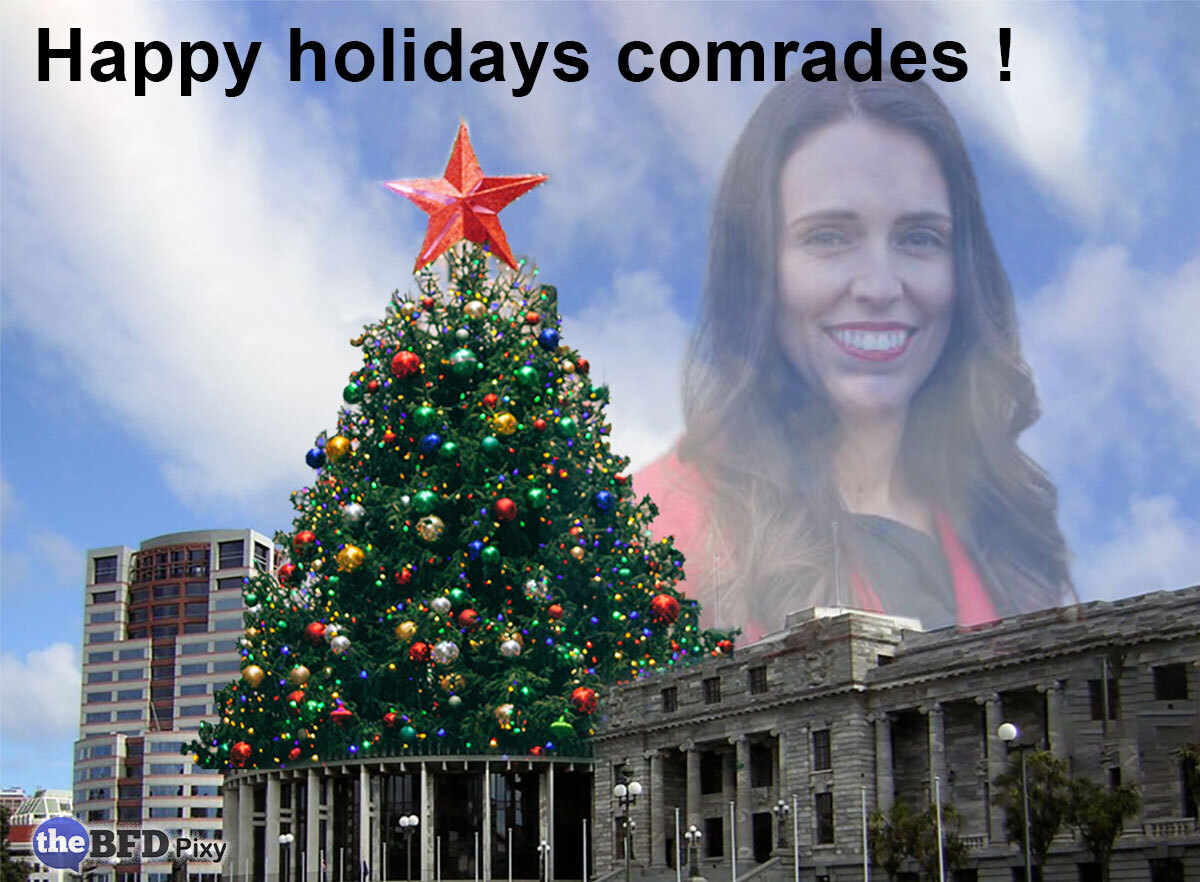