Remember the beginning of the pandemic when every man and his dog started buying up toilet paper? We laughed hysterically as Australians literally fought over toilet paper in the supermarket aisles. Every time there was an outbreak of the disease, everyone rushed to clear the shelves of toilet paper, flour and tinned goods. The COVID Queen herself came out to tell us that there were no supply problems, and to please shop normally. For once, she was right; if people hadn’t resorted to panic buying, there would have been no shortages at all. The supermarkets got wise and started to limit the number of items that could be bought of certain things – notably, toilet paper. Things settled down, of course. The supply chains held up reasonably well, and no one starved. I suppose if they had run out of food, they could have eaten the stocks of toilet paper… it is cellulose, after all.

Supply chains have been compromised further recently, and empty shelves in supermarkets are becoming the norm, but to be fair, mostly we can still get what we need. We may have to change brands, or swap items we want for substitutes, but again, nobody is starving quite yet. If anything, with the arrival of Omicron and the way it is tearing around the globe, it is reasonable to be optimistic that the end of the pandemic is in sight, and that supply chains will return to normal relatively soon.

Well, Trevor Mallard, Speaker of the House, clearly knows something that the rest of us don’t, and he has made the unforgivable mistake of actually encouraging panic buying – against everything that the government, the supermarkets and anyone with a modicum of common sense would advise.

We all know Omicron is coming, but it is only government ministers and some of their cronies in the science sector that have a real idea of the numbers so far. Personally, I have no particular fear of Omicron, but I am absolutely terrified of the buffoons in this government who shoot themselves in the foot so many times, I’m surprised they can still walk.

The very last thing a senior government minister should be doing is encouraging panic buying. This will put the supply chains under even more pressure and could result in serious shortages everywhere. The supermarkets will be forced to introduce rationing on a large range of products, but that won’t stop people who are determined enough. They will simply go around all the stores and buy up their limits… and then go out the next day and do it again. It will create bedlam along with serious problems for sick people, disabled people, those on low incomes and those with mobility issues. What was this idiot thinking?

Apart from all else, it is directly in conflict with the prime minister’s instructions on shopping. She tells us all to ‘shop normally’. That really is the only thing to do when there are shortages; otherwise, too many people buy up unnecessarily and too many others miss out. It happens every time.

I think Mallard was trying to show what a lovely guy he is by offering to do people’s shopping… you know – I’m a big Cabinet Minister, but I’m still Trev from Wainui…

Yeah. Whatever. What an own goal.

Many people will follow Mallard’s advice, believing that the world is about to run out of anything edible. They will think he has inside information on the way the world will end. I doubt that he knows anything more than we do, which is that Omicron is here, it will soon rip through the community… and then what? The planet explodes? Who knows?

All we do know for sure is that this government can never, ever, get anything right. They are a pack of untrained baboons that cause panic and mayhem wherever they go.

Mallard should be forced to resign over this. But like all of Jacinda’s henchmen, it won’t happen. It never does.

In the meantime, stock up everyone. You probably have little choice now. 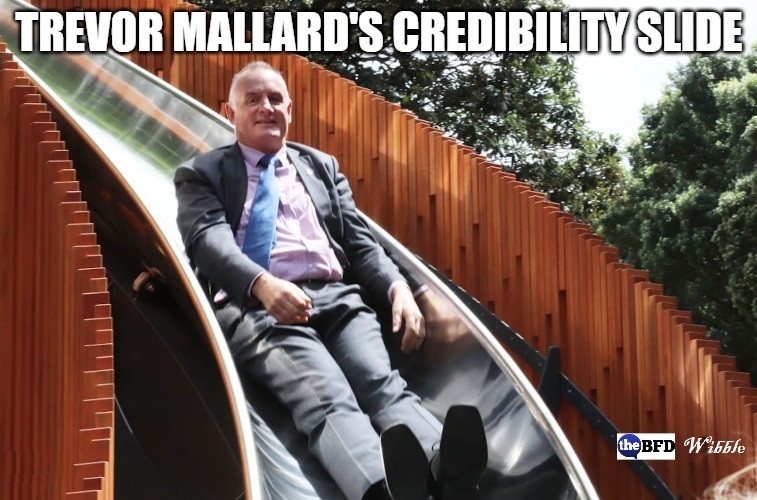