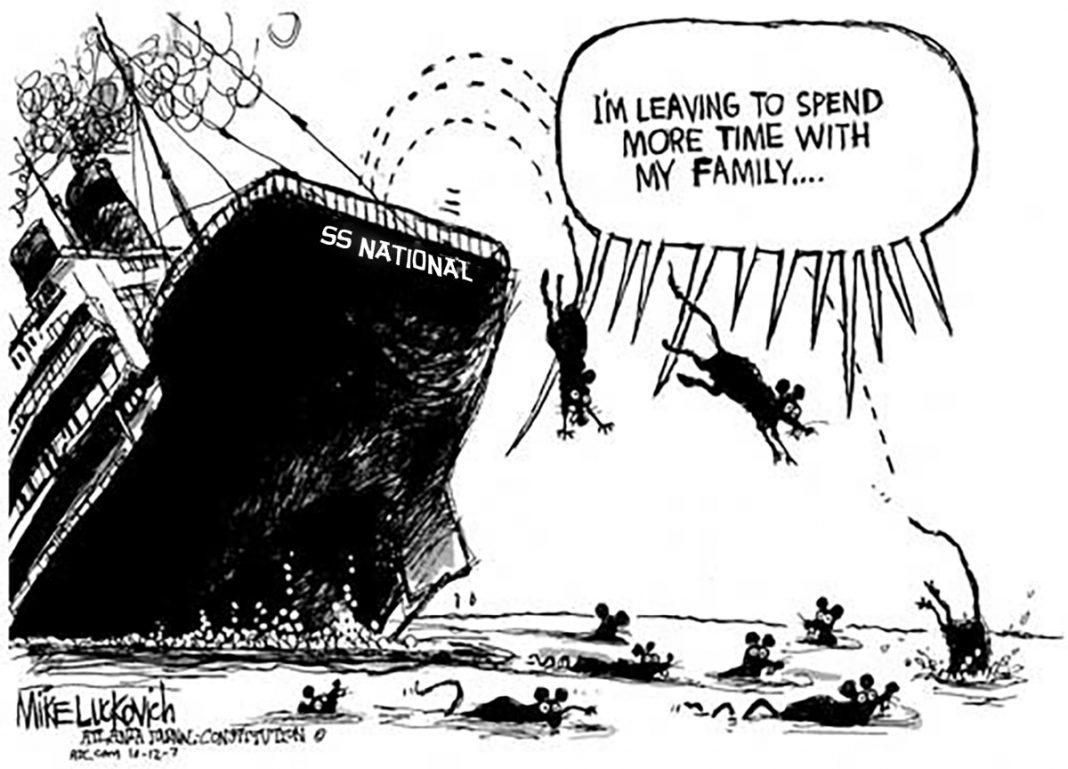 National’s rats are quickly abandoning ship ahead of the next election. First up it looks like for the National party two Chinese are better than two white MPs from the South Island.

The two National list members have a combined 41 years of political experience.

Wagner, who will have been in parliament for 15 years, lost the Christchurch Central electorate by 2265 votes to Labour’s Duncan Webb in the September 2017 election. She had held it since 2011.

Carter, an MP for 26 years, has been the Minister for Agriculture, Primary Industries and Speaker of the House. Wagner was formerly Minister of Greater Christchurch Regeneration, Statistics, Disability Issues, and Customs.

Speaking to Newstalk ZB on Tuesday, Wagner said it was bittersweet but the time had come.

Both of these MPs have been holding on hoping National would win so they can get their old jobs back. Nicky Wagner famously stood up to John Key, but that wasn’t going to work this time around. Carter has been there too long anyway.

In other news, Sarah Dowie has bolted as well. The rumours were flowing about her at the National caucus meeting last week and Simon Bridges lied to media about knowing about her demise despite having been informed of it.

Invercargill MP Sarah Dowie has announced she will not be seeking re-election after a term plagued by a scandal over a text and an affair with former National MP Jami-Lee Ross.

The announcement, in which Ms Dowie cites a desire to spend more time with family, comes after she was confirmed as Invercargill candidate for National last year and means a new selection process will be needed.

Ms Dowie, who was first elected to Parliament in 2014, took a hit when it was revealed police were investigating a text message, allegedly sent from her phone, to Mr Ross.

The text message, which included the words ”You deserve to die” was sent in the wake of the end of an extra-marital relationship between the two MPs.

Police eventually decided she had no case to answer.

The Police may well have said that, but there were strong rumours of a private prosecution hanging over her head for her bunny-boiler text messages. There were likely to be plenty more unsavoury revelations coming her way this year that would have seriously impacted on her future. You don’t run your mouth off to media and make stuff up without there being consequences. Now her career is over.

What I can’t work out was her excessive sucking up to Simon Bridges. She was used by Bridges and Paula Bennett to squeal to Melanie Reid in order to get Jami-Lee Ross. What is interesting is that two of the four women Bennett arranged to speak to Melanie Reid are now out of jobs: Dowie and Rhonda Williams, who resigned last week from Bridges office. The revolving door of his office has seen many staff exit. Many male National MPs will be glad to see the back of both of them.

These resignations clearly show that MPs don’t think Simon Bridges can win for them. They’d rather quit than endure another term in opposition. The Nat rats are leaving the slowly sinking ship.