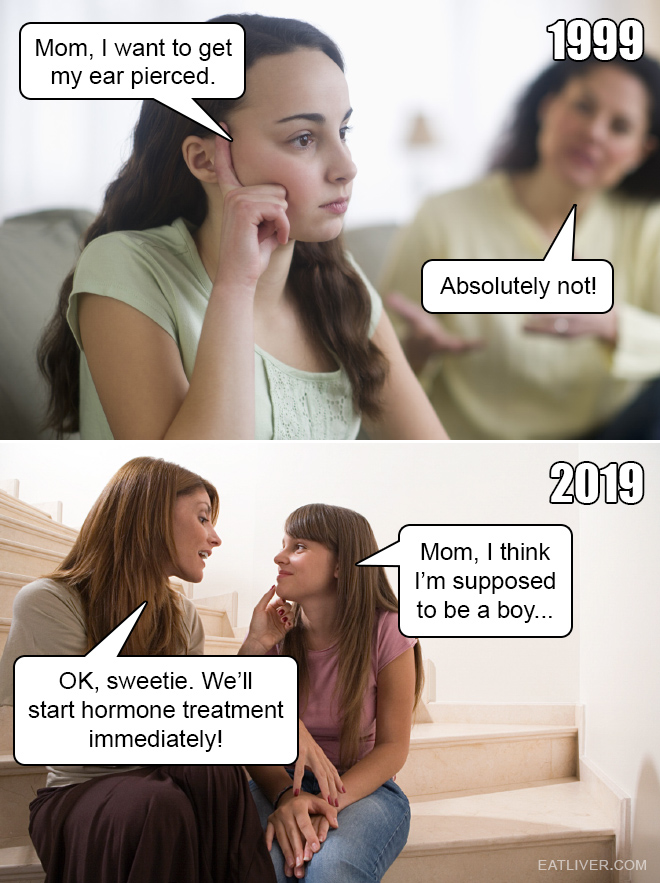 In one of the most astonishing feats of social engineering since the Soviet “New Man”, Western nations have been caught off guard by the onslaught of Marxist “transgender” ideology. But the pushback is growing, as civil society and responsible professionals marshal their arguments. Unhinged advocates, especially in positions of responsibility, are facing the very real prospect of being held legally to account for their reckless activism.

It would be gloriously entertaining to watch the inevitable avalanche of lawsuits against “transgender” activists, were it not that the road to such a well-deserved comeuppance is paved with the mutilated bodies of confused and exploited children.

Public hospitals may face “massive damages” for negligence if their transgender clinics fail to fully inform­ young patients about the risks of treatments such as cross-sex hormones, a prominent legal academic says.

“The red lights are flashing all over the world on these issues, and governments and the wider health community (not just gender specialists­) need to take responsib­ility,” said Patrick Parkinson, Queensland University’s dean of law and a child protection expert.

The arguments for “transgenderism” are confused, illogical and often fly in the face of all evidence (if indeed the activists ever even bother with evidence). But, like the Lysenkoists of old, the advocates of this Marxist “science” bully and cow anyone who dares dissent. Too many supposedly responsible scientific and medical bodies have meekly submitted to the nutty stormtroopers of gender activism.

In many gender clinics, the self-declared trans identity of children and adolescents is embraced in the belief this is best for mental health.

Withholding treatment is not “a neutral option” because this may worsen depression and suicide­ risk, according to guidelines promoted by the country’s biggest gender clinic, at the Royal Children’s Hospital in Melbourne.

But there is growing ­ inter­national concern that troubled, often same-sex-attracted, teenage girls are being primed by social media to come out as trans boys, seeking irreversible testosterone treatment and sometimes mastectomies, with the risk of health complications such as bone-density­ issues, cardiac problems and infertility.

Meanwhile, Scott Morrison and Health Minister Greg Hunt have been alerted to online trends including YouTube videos of trans celebrities, glamorised post-­mastectomy photos on Instagram, and talk on the Tumblr platform of the easiest way to get hormones.

“Social contagion” is a well-attested psychological phenomenon. Since at least the 18th century, following the wave of suicides inspired by a famous novel, it’s been well known that young people, in particular, are dangerously susceptible to fads and peer group psychological manipulation.

“Transgender” activists not only ignore the obvious dangers of their ideology, they openly encourage the state to abrogate the rights of parents.

Flinders University gender academic Damien Riggs has suggested hospitals might have to sidestep sceptical parents by taking court action to authorise treatment of trans-identifying children with puberty blocker drugs…Dr Riggs advised pro-affirmation clinicians to consider alerting authorities to child “neglect” if other clinicians or family members take a “less than affirming” approach to a young person identifying as trans.

In other words, if parents refuse to submit to the loony ideology of ivory tower Marxist academics, the state will take their children away and mutilate their growing bodies by force.

It’s a Trap, Don’t Fall for It

The BFD Video: Teacher Resigns During Kansas School Board Meeting With Powerful Speech

The BFD Video: SWEDEN IN SHOCK – Public Service News All Positive on TRUMP

I have removed the link to January's poll results from this post as some readers have used it to vote thereby changing...
Read more