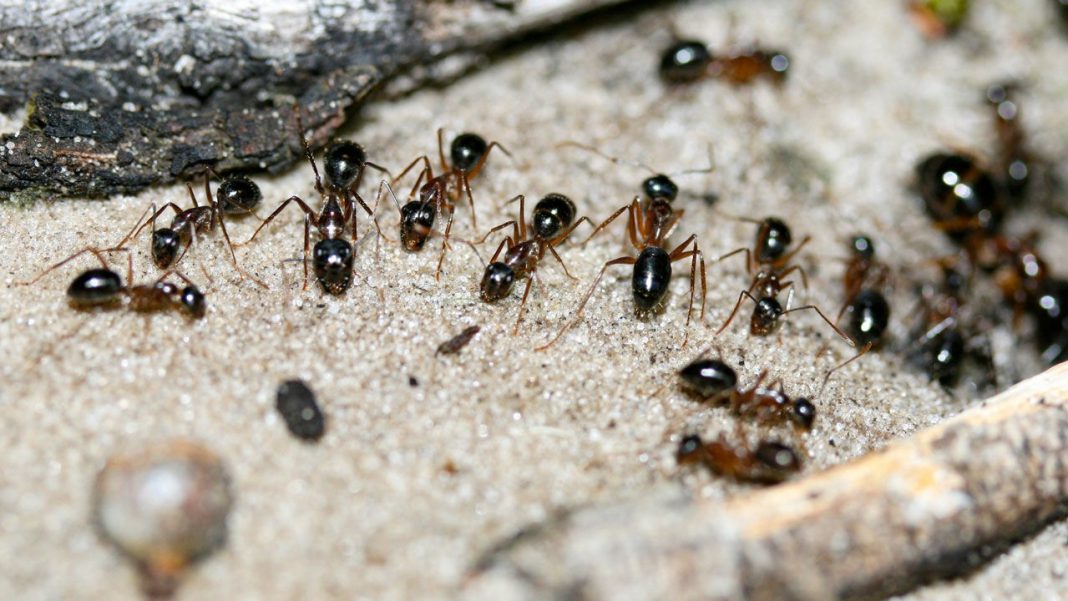 From the “I mentioned climate change and greenhouse gases so send more money” files; this research would appear to be clutching at straws in a search for relevance. Either that or they are simply taking the piss.

Wildlife ecologist Associate Professor Topa Petit, in her Kangaroo Island-based research found that sugar ants prefer urine over sugar – the food source after which they’re named – nocturnally foraging on it to extract nitrogen molecules, some of which could end up in the greenhouse gas, nitrous oxide.

There – got the magic words in!

While other ants are known to be attracted to urine, this is the first time that ants have been observed mining dry urine from sand, and for a long period of time.

“When I first noticed the ants swarming to scavenge urine, it was purely by accident. But under research conditions we found that the ants determinedly mined urea patches night after night with greater numbers of ants drawn to higher urea concentrations,” Assoc Prof Petit says.

Did she get caught short, behind the bushes, one day?

“Camponotus terebrans are undoubtedly looking for urea in urine because, similar to certain other ant species, a bacterium in their digestive tract allows them to process urea to get nitrogen for protein.

“This remarkable ability to extract urea from dry sand not only shows how sugar ants can survive in arid conditions, but also, how they might reduce the release of ammonia from urine, which leads to the production of nitrous oxide, a highly active greenhouse gas.”

Nitrous oxide (NO2) [sic – it is N2O, or ‘laughing gas’] is a greenhouse gas 300 times more potent than carbon dioxide. And while less abundant than carbon dioxide emissions, its presence in the atmosphere has increased substantially over the past decade, accelerated mostly by the widespread use of fertilisers.

Bad naughty farmers! And besides, nitrous oxide is a less potent greenhouse gas than carbon dioxide because of its low atmospheric concentration, less than 1/1000 of that of CO2.

Assoc Prof Petit says that while there is still a lot to learn about the foraging behaviours of sugar ants, the study shows a symbiotic relationship between ants and vertebrates such as kangaroos in dry environments, and evidence of the nitrogen cycle at work. […]

“Researchers working on ants as bio-indicators on grazed and ungrazed lands should take ants’ ability to process urea into account, because large amounts of urine will probably affect the assortment of ant species in the area. It would also be interesting to investigate how much ants may modify the urine ammonia volatilises from paddocks.

“This is not the last we will hear about these sugar ants – they could open up a whole new field of research.”

The comments of Mike Jonas are worth a repeat:

Assoc Prof Petit says that there is still a lot to learn about the foraging behaviours of sugar ants. She would be well advised to work on just that and not make asinine comments that reveal her abject lack of knowledge about climate. A tonne of ants, say, generating between them a tonne of GHGs every day would generate 365.25 tonnes of GHG per year (we’re doing climate science, so we have to have at least two decimal places). Earth’s GHG content is multiple petatonnes – a measure so large no-one ever uses it. Our tonne of ants would take around 1,000,000,000,001.57 years to generate a noticeable proportion of that. At our sun’s current rate of progress, it will have exploded and regenerated after the following big bang several dozen times by then.

Politicians justify their Positions on the Arms Legislation Bill

“Anti-racism” is the founding conceit of the modern left. The contemporary left was founded in the 1960s and its great bugaboo...
Read more