Skip to content
What, Me? Worried? The BFD. Photoshop by Lushington Brady.

Jonathan Miltimore is the Managing Editor of FEE.org. His writing/reporting has been the subject of articles in TIME magazine, The Wall Street Journal, CNN, Forbes, Fox News, and the Star Tribune. Bylines: Newsweek, The Washington Times, MSN.com, The Washington Examiner, The Daily Caller, The Federalist, the Epoch Times.

I recently returned from a week-long vacation in the north woods of Wisconsin. We played beach volleyball, went fishing and boating, had a lively game of Wiffle Ball with the kids, and swam until our skin was prune-like.

Even without a cell phone, I managed to stumble on a bit of breaking news from an unusual source: television. (It was virtually the only media I had up there.) Naturally, I had to share this bit of news.

“Fauci has Covid,” I told some of my companions, stuffing beer into coolers.

A discussion quickly broke out over whether the news was relevant.

“So what?” a friend responded. “I accepted a long time ago that everyone is going to get this thing.”

I partly agreed with my friend. Even during the early stages of the pandemic, I harbored suspicions that the virus was going to spread regardless of any interventions politicians or bureaucrats enacted—and those interventions could prove to be destructive, perhaps more destructive than the virus itself.

But I told him not to underestimate the importance of Fauci contracting Covid.

Why It Matters That Fauci Got Covid

It’s important to understand that Fauci isn’t just the president’s top medical advisor. Fauci, whose official title is director of the National Institute of Allergy and Infectious Diseases, is “America’s Doctor,” as The New Yorker described him in April 2020.

More importantly, for better or worse, Fauci became the architect of the US Covid response.

It was Fauci who, early in the pandemic, proposed a Covid strategy that was simultaneously radical and simple: keep Americans apart from one another, using state force, if necessary.

In March 2020, Fauci told “Face the Nation” that the strategy was working.

“The kinds of mitigation issues that are going on right now, the things that we’re seeing in this country, this physical separation at the same time as we’re preventing an influx of cases coming in, I think that’s going to go a long way to preventing us from becoming an Italy,” Fauci said.

The “mitigations” Fauci was referring to were lockdowns. Schools closed. Parks closed. Businesses closed. Any enterprise or activity not deemed “essential” by state authorities was illegal.

Americans were told these efforts were only temporary. “Fifteen days to slow the spread,” became a national mantra.

Six months later, however, nothing had changed. In fact, Fauci was now saying it would have to continue until 2022.

The idea that humans could hide indefinitely from an airborne pathogen if government bureaucrats turned the dial just right has more than a touch of madness to it, but what few seem to realize is that for Fauci, this was just the first step in a larger revolution.

Writing at the Brownstone Institute, Jeffrey Tucker points to an August 2020 Cell article written by Fauci wherein the doctor explains his ideological vision, which rings of Rousseauian idealism.

“Living in greater harmony with nature will require changes in human behavior as well as other radical changes that may take decades to achieve: rebuilding the infrastructures of human existence, from cities to homes to workplaces, to water and sewer systems, to recreational and gatherings venues.

In such a transformation we will need to prioritize changes in those human behaviors that constitute risks for the emergence of infectious diseases. Chief among them are reducing crowding at home, work, and in public places as well as minimizing environmental perturbations such as deforestation, intense urbanization, and intensive animal farming.”

The article, Tucker points out, makes it clear Fauci’s pandemic response was not just about Covid, but a larger technocratic revolution that was hard to define—and one Americans had not signed up for.

“It’s not socialism or capitalism. It’s something else entirely, something very strange,” Tucker writes. “No one has voted for such a thing. It is something Fauci and his friends dreamed up on their own and deployed all their enormous power to enact just as a test, until it fell apart.”

And this is what makes Fauci’s infection—which comes more than two years after the first lockdowns were imposed—so important.

“It’s a sign and symbol that [Fauci’s] entire theory of virus control was wrong,” Tucker writes. “He got his way with policy and it did not work. The virus finally landed on him, as if to reenact Edgar Allan Poe’s fictional story of Prince Prospero in his castle that he believed would protect him.”

In his 1974 Nobel Prize acceptance speech, the economist F.A. Hayek concluded with a warning: he urged humans to act humbly with the immense power of modern science.

“There is danger in the exuberant feeling of ever growing power which the advance of the physical sciences has engendered,” Hayek said, “and which tempts man to try, ‘dizzy with success,’ to use a characteristic phrase of early communism, to subject not only our natural but also our human environment to the control of a human will.”

“The recognition of the insuperable limits to his knowledge ought indeed to teach the student of society a lesson of humility which should guard him against becoming an accomplice in men’s fatal striving to control society – a striving which makes him not only a tyrant over his fellows, but which may well make him the destroyer of a civilization which no brain has designed but which has grown from the free efforts of millions of individuals.”

A careful look at Dr. Fauci reveals that humility is not one of his stronger attributes, and his actions show the fatal conceit that Hayek warned against infects public health officials as well as economic planners.

Despite all his efforts, Fauci was no more successful in avoiding the plague than Prince Prospero. But his mad, arrogant effort to extinguish the virus through force is a tale worthy of its own parable. 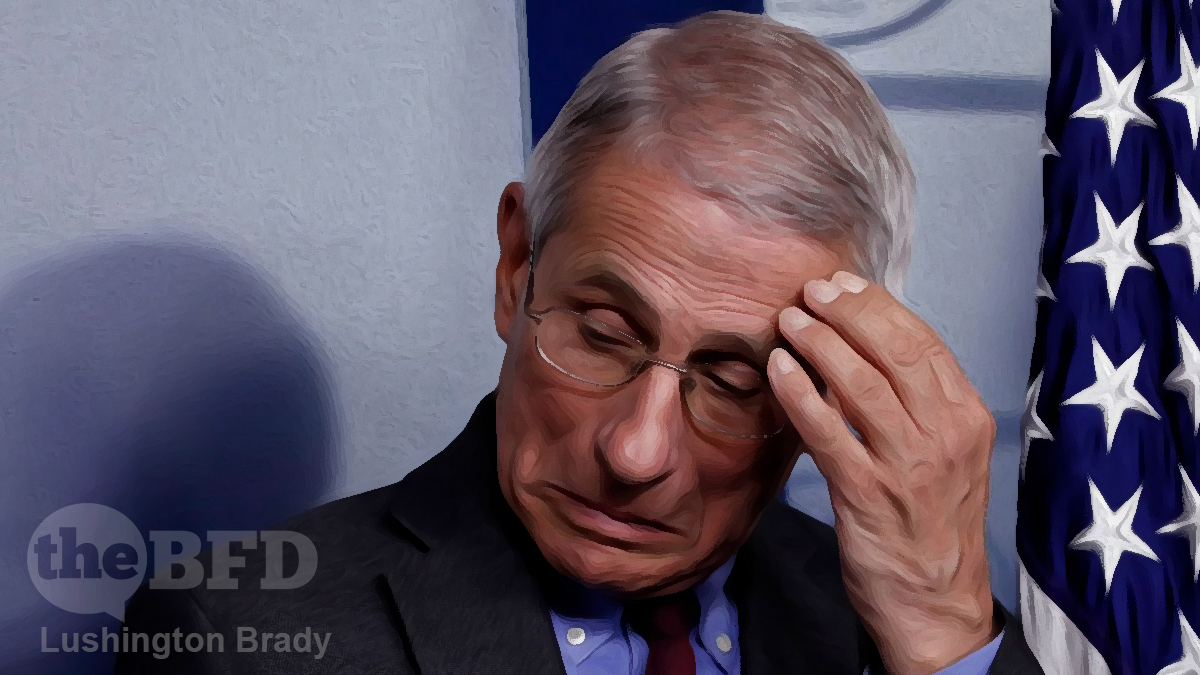