Hot on the heels of two recent visits to the Queenstown Lakes area, our Remarkably Socialist Leader Jacinda Ardern has found another excuse to waste taxpayers’ money.

Only a few short weeks after showing up on a snowless Coronet Peak to trumpet how amazing it was going to be when she might finally get around to opening the borders so Aussies could take their annual ski holiday, she has shown up again: this time to announce the start of the ski season.

Typical of the Late Jacinda Ardern, she actually missed the start of the ski season by three days. Coronet Peak opened early on Thursday after all the CO2 buggered off for a couple of weeks, resulting in a massive dump of snow on the mountains.

The Remarkables Ski Field did open on Saturday, so at least she could pretend she was opening that or something.

This time, The Remarkable Ardern made it easier for the Queenstown Inquisition. She announced last Monday exactly where she was going to be for the next few days: Wednesday celebrating another school having its name changed to Te Gibberish, Thursday in Tauranga to look in a hole or something, Saturday in Queenstown to annoy the locals and get snowballs thrown at her. (After being ‘too sick’ to go to Tauranga, it was so lovely to hear she would be out and about again. Maybe she was just sick of being asked hard questions?)

So of course, once again the QT Inquisition got on the phones. Within an hour we knew where she would be staying (not as flash as you might think, because she is a Dictator for the People you know). We also knew the plan for her day, as sympathetic minions in the airport, hotels, ski fields and police started ‘letting things slip’.

We knew for instance that 10am was a good time to be packing your snowballs, but we hadn’t figured out if she was going to chopper up the hill or maybe go up on the public bus like the rest of the plebs.

A quick visit to the bottom of the ski field road on Saturday morning confirmed a few things for us, as three car loads of cops were stationed at the bottom, stopping and peering inside every car. Clearly they were expecting an Inquisition. We didn’t try to bust through the cordon as the Remarkables Ski Field road is steep and long, and we couldn’t afford the gas to get up there (91 was $3.28 that day, thanks Jacinda). Thankfully the cops failed to search the ski bus, ha.

It seems odd that so much is being spent on security for That Woman. The airport security and customs staff were briefed that they should expect trouble in the form of protestors upon her arrival on Friday night, but were told to just “keep an eye out for any extreme ones”. I’m not sure if that includes me or not – maybe there are genuinely some extreme ones about?

Certainly they must have been worried about something going on as no fewer than four undercover cops were spotted at the airport. I think they need some better training, though, as they never even noticed our Inquisition mole.

Anyway, to kill time, I drove the mighty, banner-bedecked CoonUte down into town to see if there was anything going on at her hotel. On the way back, a marked police car trundled past. Upon seeing me, they jumped on the brakes like they were going to spin around and have a chat, but there was so much traffic that they gave up on that bold plan. To be fair it was about morning tea time and there were probably donuts to be consumed.

I decided to pop over to the ski field road to see what was happening and to catch up with some of the other Inquisition members, but on the way saw a lone copper sitting at the side of the road. As he was too busy looking at Facebook on his phone, he failed to see me drive past, so I thought I would make it easy for him, hooked a U-turn and pulled up alongside him. This may have slightly given him the willies as he jumped and looked a little shocked. Turns out he has been in for around 18 months, but he might need some training on how not to be be startled in public. I guess he simply wasn’t expecting the Queenstown Inquisition to be so bold, but to be fair, I guess no one ever expects the Queenstown Inquisition!

It turned out that he was out of the loop, having been assigned to traffic duties instead of protecting our Glorious Leader. He wasn’t any use as a further source of info so we just chatted for a bit. I introduced myself and told him he had nothing to fear from us as we just liked to hold up placards telling Cindy how much we loved her. He did admit that he had heard that I was out and about, so it seems that, once again, my illustrious reputation had preceded me. I’m starting to feel kind of special.

Anyway time was dragging on so I tripped off home for a cup of tea and a visit to a mate and his missus who have both picked up some dreaded disease that they had no intention of getting tested for.

After that, a quick check on the Inquisition Secret Communication Device revealed that one of our minions had spotted The Ardern skulking through the Remarkables ski-rental department, so we knew she was still gallivanting about in the snow.

Another minion decided to ask a question of Her Lordship as she was getting onto the chairlift. He even video’d it for your information. She is the one in the middle, fittingly dressed in black, waving at some kid. All our guy wanted to know was if the State of Emergency, which all of NZ is allegedly still under, would be lifted now that the borders had opened. Seemed a reasonable question to me, but unfortunately the most open and honest Prime Minister New Zealand has ever had chose to ignore him.

Shortly afterwards, Cindy the Magnificent was spotted further up the mountain. She was described as “standing around talking crap”. A suggestion was made that it might be an appropriate time to start a snowball fight but the person, although they had indeed thought of that, had decided against this course of action because, “The security guys were giving us the evil eye.”

Another wag commented, “We were praying for an avalanche, or a rogue out-of-control skier.”

On the way back down the chairlift, our intrepid roving reporter tried to ask Jacinda another question, you know, like all of those trained and skilled journalists never seem to. A simple question about if it might be a good idea to spend some of the Covid advertising money on new hospitals. Again he was ignored by Jacinda the Ignorant Ignorer.

But that, I guess, is par for the course. Jacinda likes to ignore difficult questions. I guess ignoring is what an ignoramus does best.

As luck would have it, another of the Inquisition members happened to be jumping on the ski bus at the same time as Cindy was jumping into her electric Prius, sorry I meant Giant Four-Wheel-Drive Land Cruiser, to head back down the hill. Further calls were made and the rest of the Inquisition managed to get in position on the road into Queenstown just in time to wave to their Princess.

So, once again, the Queenstown Inquisition managed to show Jacinda just how much we love her, but perhaps the funniest thing was reading some of the comments from people who were lucky enough to sit near her at lunch.

One said, “Had my $23 Remarkables lunch ruined today by unknowingly choosing a table right next to the selfie festival, grr… watching locals getting selfies makes me want to vom.”

Someone commented back, “Look at the bright side, at least your disgust will be visible in everyone’s photos.”

Answered by, “Good point.. silver linings.. plus I got to overhear the parents encouraging their kids to get photos: ‘go on kids, pretend we’re going to vote for her.’?” 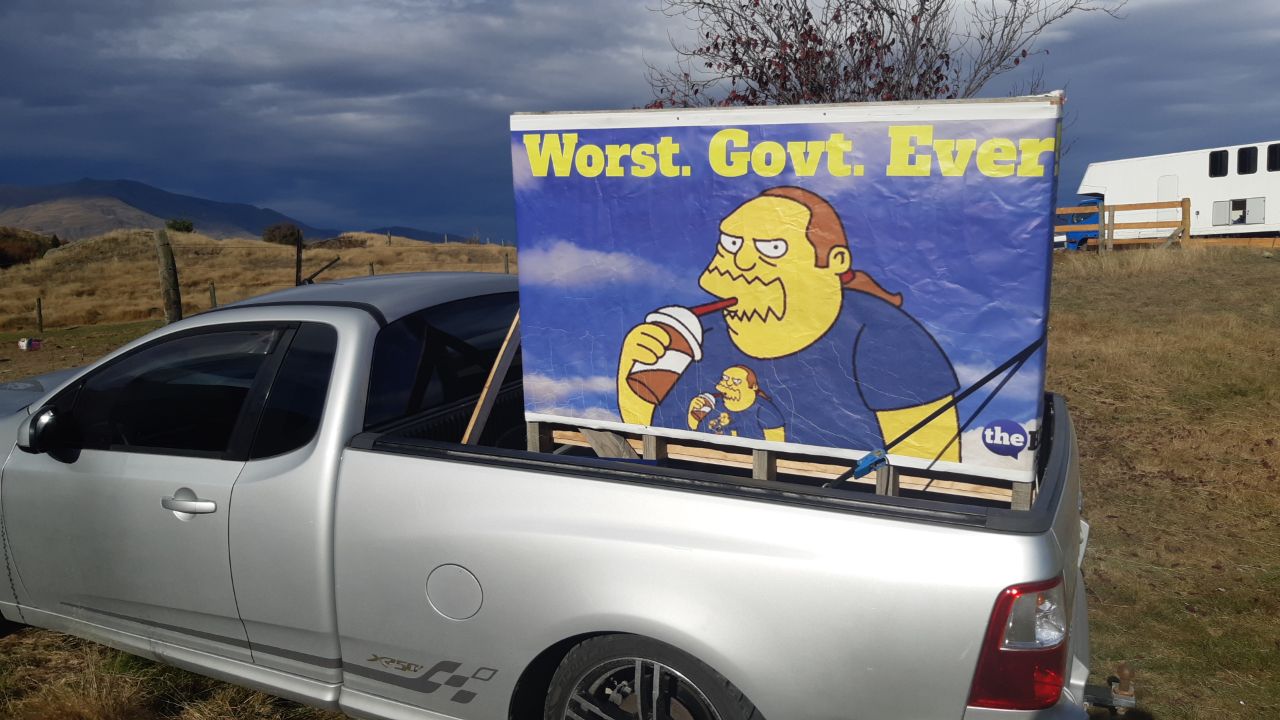