Peter Hitchens has noted that, up to the 1950s, Britain was one of the most law-abiding nations in the world. Today, London’s leading claim to fame is that it has eclipsed New York in murders. Mayor Sadiq Khan must be so proud.

One wonders how proud the Ardern government is of its singular achievement of presiding over what an international relocation website calls “an exponential increase” in crime. That’s coming off a low base, of course, so New Zealand is still ranked as one of the safer countries in the world.

Because Jacinda Ardern’s on the case, and, as with child poverty, the only things the Queen of Kindness has managed to increase are the negatives.

Even in isolation, this epidemic of criminal activity would be disturbing. But when considered in conjunction with other depressing trends – an overwhelmed health system, failing infrastructure, an intractable housing crisis and rampant inflation, to name just a few – it creates a picture of a society teetering on the brink of dysfunction.

The technical term for what ails New Zealand is that the government’s wheels are falling off.

If Hobbes was correct and government is partner to a “social contract”, then the Ardern government has not just torn up their copy of the contract, they’re wiping their arses with it and throwing it back in Kiwis’ faces. Then they’ve had the gall to badger New Zealanders to sign a new contract of racial separatism — and scream that anyone who demurs is a “racist”.

The pandemic has exposed a state drunk of power. The brutal crackdown on the Wellington protests – complete with appalling video of police high-fiving themselves for smashing a peaceful tent village –showed in no uncertain terms that government in New Zealand has descended into gangsterism.

Gun crime is rampant. A much-vaunted crackdown on firearms following the Christchurch mosque massacres in 2019 has been exposed for what it was – a piece of political theatre aimed at giving the impression of decisive action.

One of the most brazen shootings, attributed by the police to a feud between the Mongols and Head Hunters gangs, happened in the five-star Sofitel Hotel on Auckland’s waterfront. More recently, three men were shot in downtown Wellington in an apparent tit-for-tat feud between the Mongrel Mob (not to be confused with the Mongols) and the King Cobras over a stolen motorbike.

It’s not only gang members who are being shot. Last November, three police officers were wounded in a shootout near Auckland that ended with the death of the gunman.

The Ardern government’s obvious soft spot for motorcycle gangs ought to have been seen as the first warning sign of its own gangster tendencies. It’s hardly surprising that the government appointed gang leaders to government-funded taskforces on domestic violence and methamphetamine use. Analogies of chickens and henhouses come to mind. In return, gang leaders ordered their followers to vote for Ardern.

In one particularly shocking incident, members of the Tribesmen gang attacked and critically injured a motorist after he accidentally clipped one of their bikes and made the mistake of stopping to see if the rider was alright. In scenes reminiscent of a Mad Max movie, an estimated 80 Tribesmen had been terrorising drivers by riding three and four abreast, cutting across lanes, blocking the highway and trying to force drivers off the road.

Such displays of intimidation by bikie convoys are relatively common. In a gang funeral procession near Wellington, members of the Mongrel Mob took up all three lanes of a freeway and provocatively took a circuitous route through the suburbs, causing maximum disruption. It was not so much a display of grief as a triumphal show of strength.

Since Ardern became prime minister, gang numbers have doubled to more than 8,000. There are 18 recognised gangs in Auckland alone. But cities like Rotorua are the real hubs of New Zealand’s crime spiral. And why not? The government is generously providing them cheap (or free) “emergency housing”.

In a rapport between violent gangs and the state not seen since certain aspirant politicians in the 1930s used street gangs as political muscle, gangs have become political assets and virtually untouchable. Occasional big drug busts seem more about face-saving theatre than any serious attempt at crackdown on gang activity.

Ardern (and even Karl du Fresne) have tried to shift blame to Australia, for deporting New Zealand-born career criminals back home. But the number of deportees – not all of them linked to gangs by any means – is less barely a third of the new gang members.

So, sorry Jacinda and Karl, this is very much a 100 per cent Pure New Zealand problem. 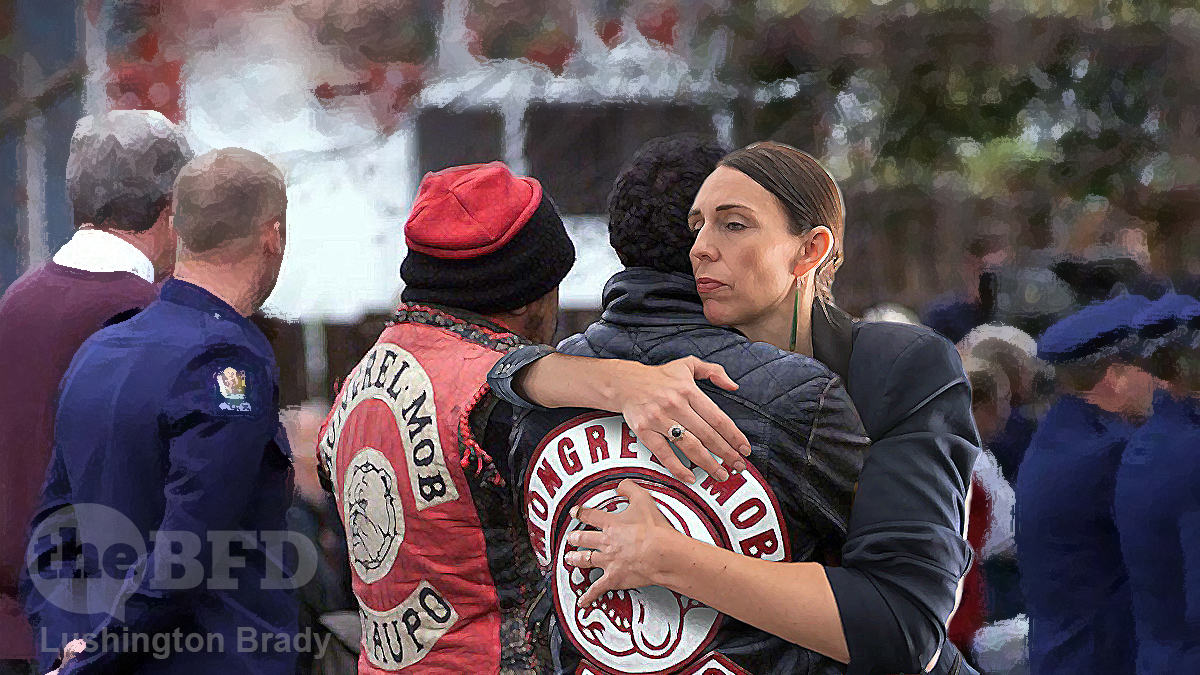