Skip to content
Doesn't Australia deserve better than this? The BFD. Photoshop by Lushington Brady.

If we really do get the politicians we deserve, I have to ask: what horrible sin have we collectively made against God and man, to be cursed with the useless dropkicks we’ve been lumbered with?

When Australians go to the polls in a week, most will do so holding their noses. To borrow from an old Bobcat Goldthwait joke, it’ll be like going into sex shop and deciding between a regular butt-plug and the AssDestroyer3000.

Is it all really our own fault?

None of us want to acknowledge that our runaway inflation is less a product of the war in Ukraine than it is because of free government money being poured like petrol on the dumpster fire of pandemic over-reaction.

Yet, can you imagine if any government in Australia or New Zealand had had the guts to admit, as did Sweden’s, or South Dakota’s Kristi Noem, that it’s not something government can control – and the cost of pretending to is ruinous? Sure, politicians like Jacinda Ardern and Dan Andrews are attracted to the whiff of state control like blowflies to a dead cat, but they only got away with it because a panicked citizenry let them. Indeed, rewarded them.

The same goes for useless, destructive climate policies. It’s bullshit and, apart from some ignorant teenagers, Boomers and wealthy greenies, we know it. Lots of us talk about the obvious necessity of going nuclear, but woe betide the government that tries it.

How can we address cost of living when both sides of politics are committed to eschewing cheap and abundant coal and gas and refuse to embrace nuclear energy?

Here the Greens and Teal ‘independents’ are driving policy in an illogical direction that suits rich people who can afford to virtue signal on climate but oppresses people in the suburbs with unaffordable electricity.

We can’t have jobs and manufacturing without affordable and reliable energy and both major parties are frittering away Australia’s competitive advantage as an energy superpower by installing wind turbines and solar panels which cannot power a modern economy.

The housing crisis is another critical issue, and it’s basic economics: supply and demand. The only ways to fix it are to either increase supply or reduce demand. Increasing supply means more urban sprawl, which everyone says they hate. Yet, we keep voting in mainstream parties who are both committed to mass immigration – increasing demand.

And on the really crucial social issues, we allow ourselves to be walked over continually.

If we want to tackle violence against women and children, we should have pro-family policies – policies that favour mum, dad, and the kids as the basic group unit of society […]

It was good to hear both leaders give the right answer to the question, ‘What is a woman?’ but the obvious follow-up questions were not asked. Why are our children not taught this at school and why are our schools teaching harmful LGBTQI+ gender-fluid ideology?

Why can’t the government overturn the Australian Human Rights Commission’s transgender guidelines which put sporting clubs at risk of legal action if they try and protect girls’ and women’s sport and private spaces?

The Coalition is at war with itself over the “rainbow” nonsense. For every Kristi Noem or Claire Chandler speaking plain common sense on transgenderism, there’s a Tim Wilson, Bridget Archer or Dave Sharma wittering about “inclusiveness” – and in the middle, there’s Scotty from Marketing, flipping and flopping like a mullet on the pier.

So, the election campaign consists of appeals to the base-selfishness of voters who don’t seem to want leaders who will rock the boat too much but will complain about them nonetheless.

Sure, the leaders may be Tweedledum and Tweedledumber – but we’ll vote for one of them, anyway. Do we really deserve any better, then? 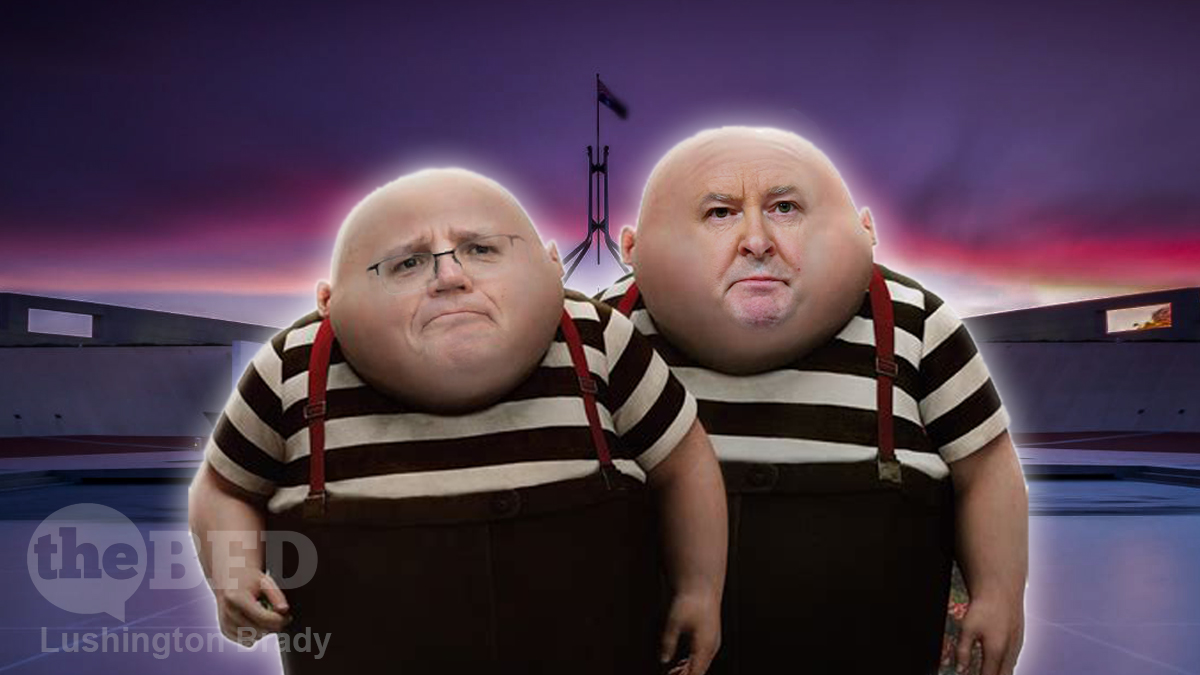