In case you missed the newsflash, Brian Tamaki is hosting a public meeting this Monday in Tauranga for the upcoming by-election, so we sat down with him to find out his motivation.

TFRC: Why have you invited several minor parties together in one meeting?

Brian: I am attempting to unite the smaller minor parties together. At the last election, if most of the minor parties outside of the current government had united, they would have received roughly 7.4 per cent of the party vote. That would have been enough to give them approximately nine seats in parliament.

To this end, we are coordinating upcoming talks with both NZ First and the NZ Conservative Party, and we’ve already had some brief discussions with NZ Outdoors & Freedom Party, ONE Party, Democracy NZ and Vision New Zealand. We will get to the other parties soon too. It is time to talk unity across parties!

TFRC: What is wrong with how the current big political parties operate?

Brian: The total power Labour has had, did corrupt! And the four opposition parties were complicit with Labour and did not stand up to its excessive control. It’s time for political change: they have had too much power, and it’s time for that power to return to the people. Party politics has ruined democracy. We had 120 so-called representatives in parliament, yet at a time when one in every three New Zealanders agreed with the parliament protesters about dropping mandates, the rogue speaker of the house Trevor Mallard called for cross-party agreement from all parties to not represent those who voted them in. Not one MP came out to speak or listen to the voice of the people. That day democracy totally died in NZ politics. It shows they operate by party politics over people’s representation. Those 120 politicians committed democratic treason. This now justifies a different voting approach from New Zealanders at the up and coming 2023 elections. We cannot just settle and let this all slip by.

TFRC: What have you got planned on Monday night?

Brian: On Monday night in Tauranga I will be hosting the following candidates as we run up to the Tauranga by-election in June 2022:

Winning here in Tauranga would be great for any of these candidates, but the biggest WIN in this by-election would be the return of political power back to the people. Less of ‘toeing party lines’ and ‘centralised power’, and more local and regional governance by representatives who are in touch with local business, commerce and trade. People who genuinely know the needs and heartbeat of that community.

We can do better, and I ask New Zealanders to not just dig from the same old pool of self-serving career politicians and being battered and screwed over in some way each election cycle by the outdated questionable politics that Blue and Red dish up. I dare voters to vote differently this election. On Monday night I’ll be expanding on what this looks like and why what happens in Tauranga can change the political future of New Zealand. I’d encourage everyone who is curious to come along. 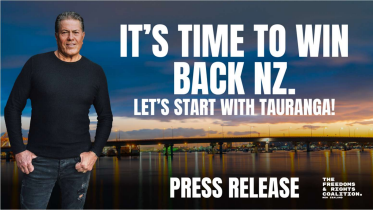