Faced with a judicial review of his decision to trespass Winston Peters, it seems that Trevor Mallard, who has an ignominious record before the courts anyway, has bottled his decision and rescinded the trespass orders.

Speaker Trevor Mallard has withdrawn five trespass notices issued after the Parliament occupation following push-back from Winston Peters and MPs across the House.

Peters has confirmed that one of the withdrawn notices was his own.

The five come from a pool of 151 trespass notices, with 144 of those being people who were arrested by police during the protest.

Mallard said seven additional notices were issued to “persons of interest” with five of these being withdrawn – and two remaining in force.

“I have been working with Police and Parliamentary Security to constantly assess threats to Parliament, and the advice I have received is that it is no longer necessary to retain trespass notices for these five people,” Mallard said in a statement.

“The behaviour of some individuals was clearly more egregious than others, and on that basis it has been relatively easy to identify those persons issued with trespass notices who no longer are regarded as being a risk to the safety and security of others at Parliament.”

Which is a rather different explanation from the other day when he played his best Sergeant Schultz impersonation saying he knew nuffink.

Winston Peters and Matt King never were “a threat to Parliament”. Mallard’s actions are those of a petulant bully who when confronted by someone prepared to stand up to him, capitulates like the coward that all bullies are. Winston will have fun with the statement that he was a “threat to parliament”.  That, of course, is a bit of a Freudian slip really, because this whole trespass thing is really about trying to eliminate politicians that Jacinda Ardern considers to be threats to her rule.

Trevor Mallard needs to be held to account. This latest episode just adds to his already long list of actions that have brought him and Parliament into disrepute. He falsely smeared and defamed an innocent man with rape allegations, for which the taxpayer coughed up more than $333,000 for damages. That case was made even worse by Mallard’s actions during the legal process.

Then we saw him send in the Police to beat up peaceful protestors and when that failed, he used Guantanamo Bay tactics of psychological torture on protestors and provoked things even more when he ordered the sprinklers turned on in the middle of a torrential downpour. Then he contrived a terrorism threat that saw Police brutally clear peaceful protestors from the lawn, culminating in a riot when people who had nothing left to lose reacted to the brutality.

Now his petulant and churlish trespassing of politicians from Parliament haas blown up in his face as it was always going to.

But this is also the Prime Minister’s problem. She is trying desperately, first to blame security, then sort of blame Mallard, but the real blame lies with her constantly backing this boorish idiot every step of the way.

This whole latest episode smacks of the tyrant trying to silence political opponents any way she can. This is truly the stuff of despotic banana republics. If only she’d relent on climate change stuff so we can actually grow bananas.

This was always political. If anyone actually believes that Trevor Mallard knew nothing and that it was all in the hands of Parliamentary Security, then I have a $2 billion bike bridge across Auckland harbour to sell you. This is precisely why Winston Peters should proceed with the judicial review, because although Parliamentary Services and the Speaker’s Office are not subject to the Official Information Act, they are subject to discovery processes in the courts.

Ardern must have known too, and while we are at it we need to look at the actions and words of Chris Hipkins, who was smearing Winston Peters as a co-conspirator in the violence.

Ultimately the buck stops with Ardern. She’s the leader of the party of which Mallard is a List MP. She can’t wash her guilty hands of this. But she will try.

The day before Mallard capitulated Winston gave 24 interviews before 3pm. He would have been very, very happy with that outcome. I’d even hazard a guess Winston is opening a bar tab at The Green Parrot for Mallard as thanks.

Now Mallard should go. He’s cooked his goose, and opened up duck season a few days early as a result. 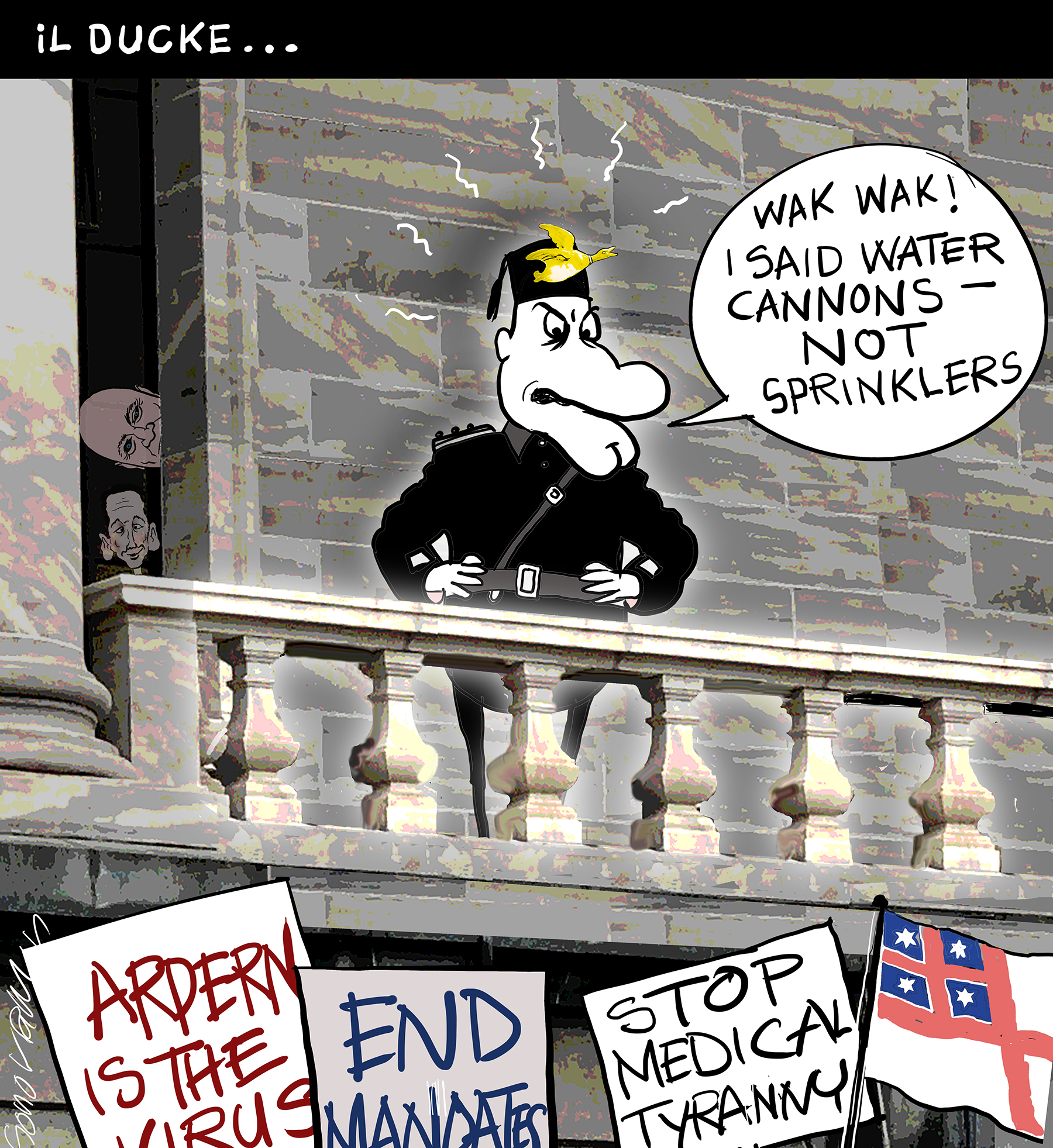