Dr Guy Hatchard is an international advocate of food safety and natural medicine. He received his undergraduate degree in Logic and Theoretical Physics from the University of Sussex and his Ph.D. in Psychology from Maharishi University of Management, Fairfield Iowa. He was formerly a senior manager at Genetic ID, a global food safety testing and certification laboratory. His published work uses the statistical methods of the physical sciences to analyse social data. He has lectured and advised governments in countries around the world on health and education initiatives.

Slowly but surely the truth is seeping out, and it is not pretty. On May 6 2021 a preprint paper was published on medRxiv The BNT162b2 mRNA vaccine against SARS-CoV-2 reprograms both adaptive and innate immune responses

This paper, which caused little stir at the time, reports that the body’s first immune defense against illness — T-cells — are suppressed following Pfizer mRNA vaccination. The paper summarised:

“In conclusion, the mRNA BNT162b2 vaccine induces complex functional reprogramming of innate immune responses, which should be considered in the development and use of this new class of vaccines.”

We could be forgiven for not knowing exactly what this implies for our health, but recently US pathologists have been speaking up about an uptick in cancers.

Everyone will be aware of what this means, most cancers develop slowly over time, but without adequate T-cell function, they can develop and spread more rapidly. Precisely what pathologists are reporting in the US, including even unexpected sudden-onset cancers.

This paper was published 10 months ago, so why wasn’t more done to follow up on the warning in the paper? An interview with US pathologist Dr. Ray Cole provides the answers. Early warning signs and calls to perform autopsies on deaths subsequent to vaccination, and thereby cast a wider investigative net, were ignored by medical professionals and administrators. They said, “we really don’t want to get into that”.

The problems with our pandemic response run deep

Much the same has happened here in New Zealand. In most cases, autopsies have been judged unnecessary, removing a vital tool from the process of discovering the causes of excess deaths.

Despite the introduction of a novel biotech vaccine following greatly reduced testing requirements, few if any additional safeguards were introduced. Mandatory reporting of adverse effects following vaccination was specifically rejected.

The problems go much deeper than that. Many factors have contributed to the largest public health safety failure in NZ history. These involved failings at many levels and in many sectors of healthcare, government, and the media.

The government and the Ministry of Health decided to accept reassurances from Pfizer about safety and efficacy at face value. Nothing that emerged subsequently shook their faith or reduced their saturation advertising promising the public safety:

Why did the government hide data from the public?

Increasingly over the last few years, our government and the medical profession have become firmly plugged into the pharmaceutical PR pipeline. To coin a phrase, this became the government’s only source of truth. Pfizer has an appalling safety record, so our government certainly has to share the blame.

It gets worse, the government had such strong faith, they decided to insist on regulations that went beyond those recommended by Pfizer.

Vaccine adverse events were judged to be mild and short-lived without any long term data to back up the claim.

Most of the early warning signs were a matter of public record in science journals, so why were few warning voices raised among the medical profession? GPs that spoke up were sanctioned and threatened with expulsion by the General Medical Council. Neither did the media report their concerns, except to lampoon them as fringe wackos deserving of punishment.

Clearly, the government was afraid of a severe outbreak. Modellers were predicting 80,000 Covid deaths in New Zealand. Overseas reports of deaths appeared to be catastrophic. We now know that the British and American press promoted sensational coverage. Deaths because of Covid were likely as low as 10% of deaths with Covid. UKSHA reports that the average age of Covid deaths was 82.9 years, higher than the UK life expectancy.

There were also early mistakes with treatment protocols. Intubation is a very invasive and risky procedure, 85% of those with Covid receiving this treatment died. It is now seldom used. Promising cost-effective early treatment protocols were dismissed as quack cures, while pharmaceutical companies quietly urged governments to wait for their expensive medicines under development.

There was another powerful force at work—money. Our government decided to borrow big and splash the cash. From the outset, they set aside $64 billion dollars of additional borrowing to be spent on mitigating the impact of the pandemic especially by encouraging vaccination. The full strategy and figures haven’t been released by the government (an answer to an OIA request contains significant redactions), but these are some of the mostly secondhand reports we have received:

These are just the tip of the iceberg, the list goes on. This was a time of cash bonanzas for many associated with the medical profession. A GP I know had reservations about the safety of the Pfizer mRNA jab, but enthusiastically promoted Covid vaccination to his patients. The money was too good to turn down.

It takes real dedication to spend $64 billion, but the government managed it and more besides. You and I will have to pay this back. Increasing our low emergency bed capacity was not even prioritised. Hospitals like Whangarei General with sewage leaking within its walls were told they would have to wait for repairs while the Covid gravy train rolled on.

Was evidence cited from a balanced perspective?

Members of the medical profession found themselves in the public eye. They all knew that there was only one message acceptable to the government: ‘vaccinate’. Turning a blind eye to risks became a professional requirement. Ethical standards were reframed, the Hippocratic oath forgotten. There is no doubt this was a matter of faith, faith in vaccination as a stand-alone medical intervention beyond reproach. The fact that mRNA technology bore no resemblance in its action or effects to anything that had previously been called a vaccine, was something that could be forgotten in the heady days when epidemiologists, modellers, and vaccine experts became front-page news and revered public idols.

Did scientists, ministers, and government advisors reference the primary evidence while speaking? If they did (which was seldom), they were very careful to cite papers written by colleagues who were every bit as enthusiastic as themselves, often funded by vested interests. Were they well paid? Apparently so, new institutions such as Te Punaha Matatini, enjoyed government support and duly published papers advising the government among other things that adverse effects of mRNA vaccination were a conspiracy theory. Journal papers raising questions were dismissed as fringe. Privately some admitted there were dangers and deficiencies, but had faith that vaccinations would improve in the long run, so no worries.

This week the government announced that unvaccinated NZ citizens abroad would no longer be required to enter MIQ on their return. A sign that things are changing. However, it will take more than just rolling back mandates to normalise the New Zealand health landscape. The effects of propaganda will have to be rolled back, safety measures introduced, independent voices installed within our regulatory systems. Lessons must be learned.

Principally the inherent dangers of novel biotechnology need to be recognised. The whole biotechnology research enterprise, which likely caused the pandemic, should be paused and reassessed. Already we are witnessing the pharmaceutical PR machine placing articles in papers around the world calling for money to be spent on developing new biotech vaccines for their future pandemics.

This should be a never again moment, but it will not be so unless we wake up to the need for medical reform, government accountability, and media balance. The NZ Bill of Rights needs to be entrenched in the constitution. Those adversely affected need to be compensated including those who lost their livelihoods. Otherwise fear will remain normalised. 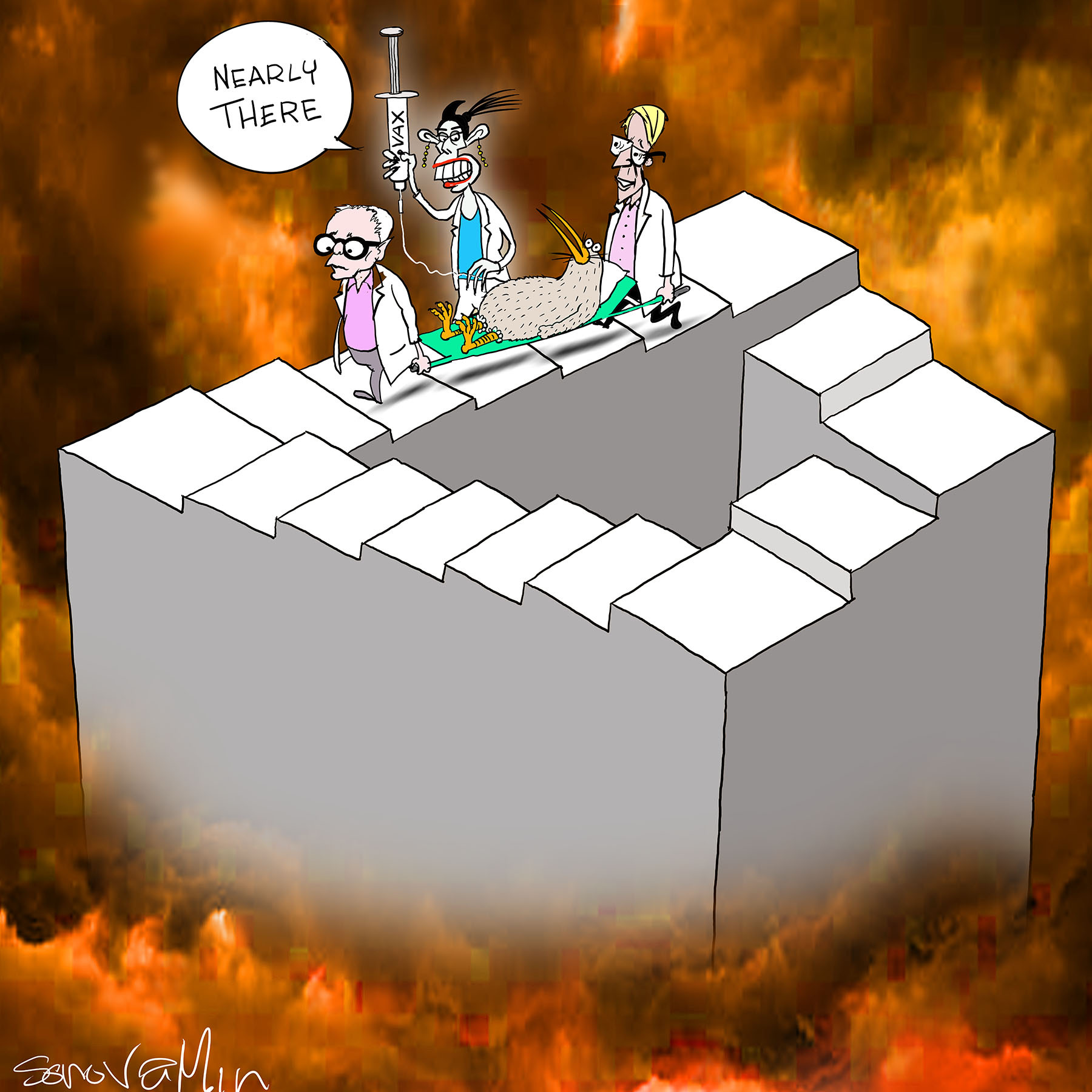