Weasel words the lot of them. Oh, how the mighty have fallen. Gone are the days of Ardern being fawned over everywhere she goes.

Whether she is being run out of town in Paihia, accosted in the streets in Wanganui, or allegedly being given the bums-rush from a butcher in Tairua, the division and hate that she has so skillfully engendered in her ‘subjects’ is flowing back to meet her every time she steps out.

On Thursday, rumours started circulating that the World’s Worst Prime Minister had slunk into Queenstown. A quick check of the mainstream media failed, however, to shed any light onto why Ardern might be here. Questions abounded. Why was she here? Where was she staying? Where was Clarke?

Well of course it doesn’t take long for loyal subjects to find this sort of stuff out and she was quickly tracked down to one of the swankier hotels in Queenstown, QT Hotel.

Spies were duly mobilised; they quickly ascertained that Ardern was in town for some lovely soft PR with the kind folk up at Coronet Peak Ski field, probably telling the adoring Main Stream Media how great she was and how Labour had saved the town from certain doom by opening up to the Aussies for the upcoming ski season or somesuch. (Hope nobody asks about the last two years of deprivation for Queenstown!)

So come Friday lunchtime more local folk had found out what was going on and I started getting calls. Did I know that ‘Satan‘ was in town, asked one friend? A message asking to borrow one of my banners for an impromptu protest was left by another. A notification that the local Voices For Freedom group were to be conducting one of their ‘Pop-Up Protests’ was sent by someone else.

It’s funny how much information one can get in a short amount of time. Staff who work at a certain hotel, freedom fighters on E-bikes surveilling the driveway, local folk who just happen to be setting up the room at Coronet Peak, it all comes flowing in if you know where to look.

So clearly I needed to go and take a look for myself. Into the ute I climbed, the one that just happens to have a giant banner suggesting that one can’t comply one’s way out of tyranny on one side and some useful advice to the public on the other, and I headed up the hill to Coronet.

On the way, I heard that a certain silver Mercedes van had left QT Hotel and passed by the good folk of VFF who just so happened to be staging their Pop-Up at the bottom of the only exit road from the hotel. Stroke of luck that one!

As I turned off the main road, I saw the local unmarked Holden SUV sitting quietly in the gravel carpark. Surely they had seen me, after all, I had a bloody great sign on the back of my legitimate ute, but no, I didn’t get stopped, so I thought, maybe it was a trap?

All the way up to the top of the road I went and I saw a Crown BMW backed into a carpark. Its driver ignored me, or did he? I pulled up near the base building and saw that I had missed Her Holiness as the Merc van was already trying to find a park. He went around the carpark twice, tried parking front in and tried parking back in. It just wouldn’t work, so he bailed out and parked it up a side lane out of the way. It’s a tough life driving around royalty I tell ya.

So I hooked a U-turn, figuring that there is no point in bothering the parking attendant Police, parked up down in the next carpark and watched what was going on. Nothing it seems, so the only thing for an investigative journalist such as myself to do was to whack my dayglo on and go and have a chat with the Feds.

I could see the concern on the first constable’s face as I approached. Was he reaching for his pepper spray? I couldn’t tell from that distance. Nope, he just folded his arms into his stab-resistant vest (that’s taught in Police College now, I think) and he greeted me warmly.

“Gidday mate,” I say, trying not to sound like a White Supremacist, Far Right, Alt-Media type. He already knows who I am; my reputation has preceded me. I guess they were watching me go past after all.

I chatted amicably with the young chap. He didn’t seem like he was going to Taser me but you can’t be too careful these days. I kept a respectable space between us so as not to be in eye-gouging distance and he asked what I was there for.

“Well, I hear the Prime Minister is here so I thought I would come and have a look-see, maybe see what she is up to.” The young copper noticed my ‘TheBFD‘ logo on my dayglo vest and enquired what it stood for. I explained that I am a journalist for New Zealand’s fifth most popular news and views website and I was hoping to go and do my journalist stuff.

At this point, I noticed one of my old cobbers over by the stairs. He was eying me up, trying to decide which baton would be best, extendable or PR24. He glanced over to the big fire extinguisher on the wall but I could see him second-guess that one, but finally, recognising me through my unkempt whiskers he came over. “Gidday Bob,” I said (that’s not his real name though as it’s not his fault he is still a copper, sometimes you just get stuck in the job, you know how it is). “How did you know she was here?” he asked innocently. Hahaha, oh at least you still have your humour Bob, seriously, did you think it was a secret?

He had never heard of The BFD! ‘Heathen‘ I opined before explaining what it is that we do here. He asked if I had a pass. “No, sorry,” I said, “we aren’t accredited media, just normal people who work for a living.” “No, I mean a VaxPass,” he said, “that chick won’t let you up the stairs without one.”

Bugger, stymied by ‘Ardern the Transparent Tyrant’s rules. I shall never be able to grace her with my presence, simply because I haven’t been repeatedly stabbed in the arm by one of her henchmen.

No matter, I chatted for a bit, reminiscing about the good old days when one of our mates crashed through a nearby fence while skiing, and complaining about how expensive it is to keep horses. I bid my farewells and told the nice young policeman how nice it was to meet him (if you are friends with them, they are less likely to shoot you with 40 mm rubber bullets ya see).

I wombled back to the ute and headed off down the hill, only to get a phone call from Constable Bob on my private phone. “What was the name of that website again? The Secret Squirrels want to know!”

Damn, now I’ve done it, the Secret Squirrels are on to me. I had better lay low for a year or two; you know how Tarquin and Sebastian can hold a grudge!

So off I headed before I got arrested, for a nice cup of tea, ’cause that’s what all self-respecting terrorists do these days, and I soon heard that a Royal NZ Air Force jet had just lifted off from the Queenstown Airport.

And just like she slunk in, your Prime Minister skulked out again. I got a report that the 757 was seen flying “eerily low and quiet” over Omakau. So even after she had left town, she was still ‘flying under the radar’.

If she were any more open and transparent, she would be a concrete block. I’m so sad I never got to say ‘hi’ to her as I was wearing my special Tee Shirt and everything. 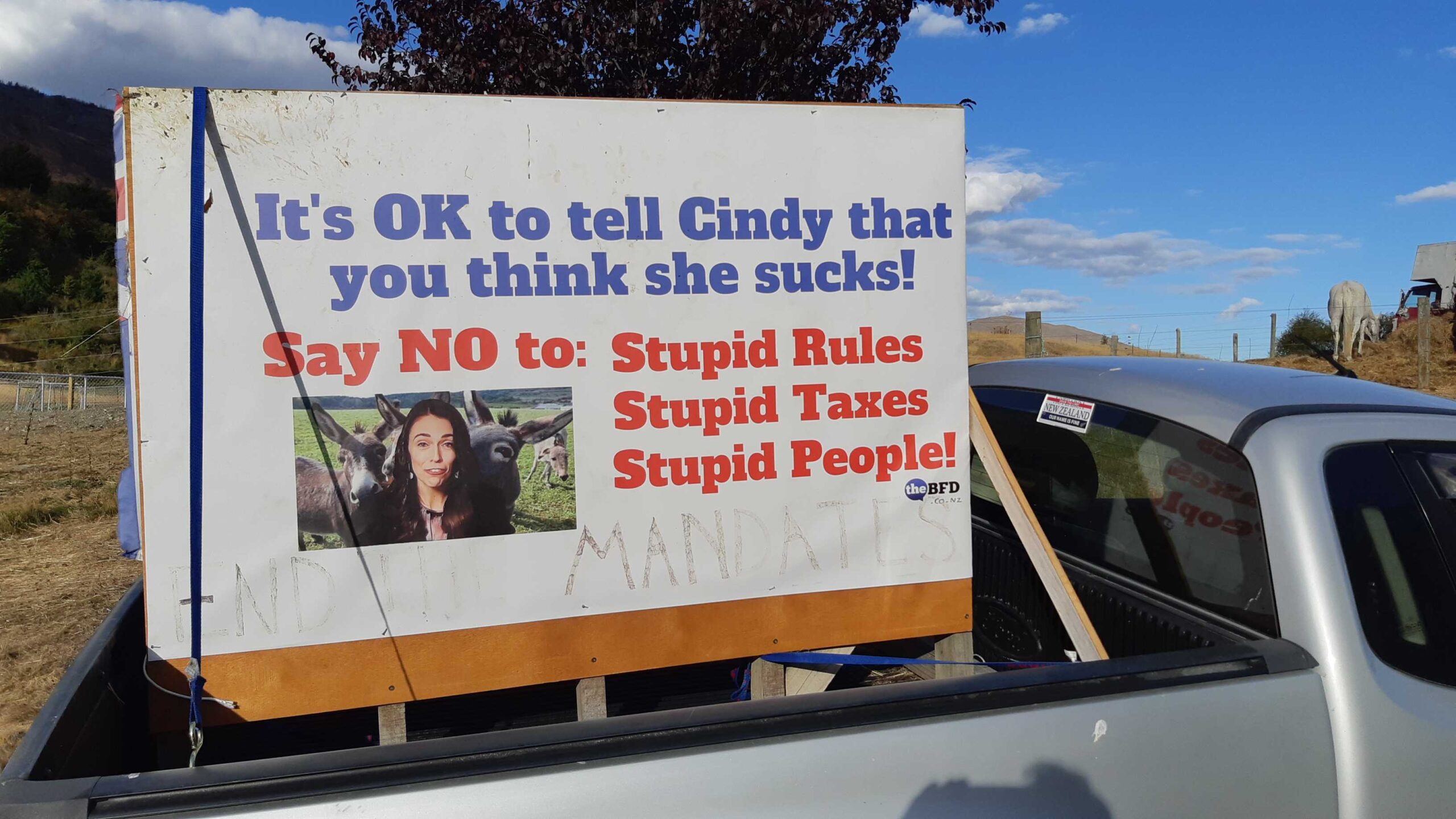