Skip to content
The BFD Face of the day. Do you recognise this police officer?

It was the Police, not protestors who brought violence to the streets of Wellington.

Veteran ambulance chaser Carolyne Meng-yee had an article in the NZ Herald yesterday that was heavy on emotion and very light on facts. The regime is obviously shocked by faltering poll results, so they’ve deployed more dis-information about the Wellington protest.

Speaking for the first time since he was injured, the detective, whom the Herald on Sunday has chosen not to name, says watching the increasingly violent anti-mandate protest on Parliament grounds unfold didn’t sit well with him. With his wife’s encouragement, he put his hand up to go to Wellington to join his colleagues on the frontline.

What? Increasingly violent? That’s just a lie. It was peaceful, people were singing, kids were playing…until this clown and his mates turned up for a bit of biffo. What sort of a cuck rushed off to Wellington to get stuck into protestors on the basis of his missus telling him to? I bet her name is Karen.

“I was angry we were being treated like that. I wanted to do my bit. This protest had all the hallmarks of the Capitol siege when protesters tried to overturn Trump’s defeat – the violence, the anger, the intense hatred from the disenfranchised and the rabid right-wing. We had a unique opportunity and some of us were champing at the bit to go there in whatever capacity.”

I think it is doubtful whether a cop even wrote that. More like straight out of the tyrant, Jacinda Ardern’s, disinformation department. But a little bit of truth leaked out and this thick copper didn’t realise it. They were gagging for a fight, so they create a narrative, with the regime’s and media’s help, that this was some sort of right-wing insurrection.

“We were pelted with everything, iron bars, fire extinguishers, paint-filled projectiles, trestle tables, gas bottles, cones, bricks – anything they could get their hands on.

I think he was talking about Police using fire extinguishers:

“We had to stay in the fight and we are only as strong as the weakest person that gives up on that line,” he says. “There was a real sense we needed to keep to our line and stick together. It was ‘push, push, push, hold’. Inch by inch the guys kept their line and they kept their cool. On TV, you see we are not doing anything. We are standing there with our shields, we’re not firing rubber bullets, we weren’t picking up bricks and throwing them back. We are standing there and taking it.”

Really? Despite all the video evidence to the contrary, this bent copper just outright lies. Then again he is probably just parroting lies straight from the mouth of the Commissioner.

No rubber bullets eh? What was the 40mm grenade launcher for then?

What was this then?

And the final lie, that they weren’t picking up bricks and throwing them:

This detective is clearly and demonstrably a liar. The fact that the NZ Herald published his lies just makes them complicit and propagandists for the state. And he is so proud of his role in bashing grannies:

“It was probably the best day in my career standing next to these guys who had your back and you had theirs. We had a common cause and we were there for each other. It was a sad indictment on our society but I feel really proud to have stood up and be counted.”

Remember the violence only began when the Police and media declared they’d seen pitchforks in the hands of protestors and decided to bring violence to the forecourt of Parliament.

Have the Police produced any evidence of a single pitchfork, let alone many pitchforks? Have they produced so much as a photo of a pitchfork? What about an actual pitchfork? Surely they were lying around after the protest ended?

What about media? Any photos? There were literally thousands of photos, videos and cameras that could surely produce such evidence, but, strangely, nothing has been produced.

Do you know why? Because it was a lie. One of many told and that continue being told by media, politicians and Police.

Had the Police not escalated things, by removing toilets, halting refuse collection, destroying showers and then raiding sleeping people at dawn; dragging them out of tents and pepper-spraying them, then turning up with stormtroopers, 40 mm grenade launchers, fire hoses, long batons, riot shields and pepper spray and then set about wantonly destroying people’s possessions, there never would have been bricks chucked at the end.

Why? Because talk of insurrection is yet more lies being told by corrupted media, venal politicians and bent coppers.

No wonder the regime is tanking in the polls: they just flat out lie despite all the video footage, photographs and live streaming that showed that it was the Police, not protestors who brought violence to the streets of Wellington.

When media lies, the truth dies. 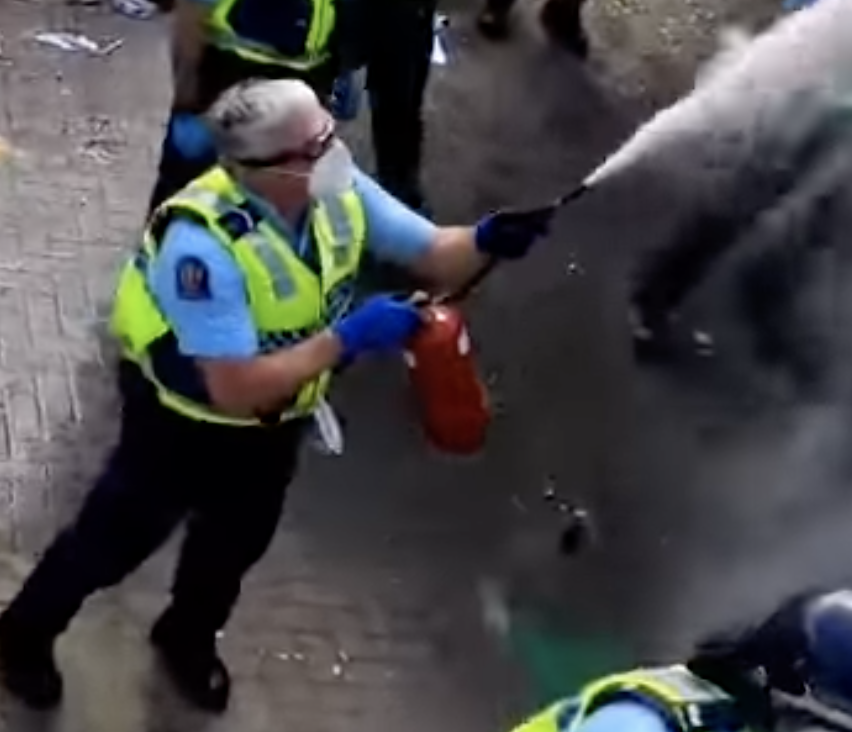