Paul is currently living in Queenstown and thought he had better pop up to Wellington to see if he could hunt down the terrorists.

Paul Luciw has lived in Hong Kong since 1991. He founded the AsiaXPAT site in 1999, and has written thousands of articles about Hong Kong and Asia powering the expat Must Reads section. Whatever the issue, if Hong Kong is involved, he’s got an opinion and usually an answer.

So… here we are in Wellington. I’d read in ‘the news’ before I left to expect terrorists camped out on the lawn in front of parliament. So I approached with great trepidation … looking for booby trap trip wires maybe some snipers (snipers are the worst.. you never even know it’s coming).

I was extremely wary when crossing the street as surely there would be IEDs (cuz that’s the terrorist’s favourite party trick!). Relying on guile (and my spider sense), I made it past the gate and into the heart of what the NZ Herald told me was ‘the most dangerous acreage this side of Syria’. I crept around to one side and almost stumbled over some kids who were finger painting. Could it just be a ruse to lull me into a false sense of security? A clever trick? Just what a terrorist would do.

There was an elderly fellow standing watching the kids and I went up to him and asked – have you seen any terrorists? – “uh you mean those burly guys on the other side of the barricades?“

Turns out Andy had lost his job as a forklift driver at the port because he rejected the vax. Maybe Andy was a terrorist looking for pay back? “Oh no,” Andy told me… “we’re just here to support the cause and try to end the mandates.” Oh, OK. Andy was pleasant but not at all helpful so let’s move on.

So I wandered over to a tent where there was a band playing reggae – Bob Marley methinks… wonder if there are any … terrorists here? There are lots of people dancing having a great time in spite of the rain … I was sure someone would leap out from the bushes and terrorise me… but nope… nothing … But I did not let my guard down … cuz Stuff and RNZ and ODT all had the same story as the Herald claiming there were terrorists/extremists occupying parliament… and they would never lead me wrong – would they?

I’ll go back tomorrow .. maybe the terrorists were taking the day off today. It’s a stressful profession being a terrorist… even they need a day off. Yes, I’ll go back tomorrow … but first I must make a quick run to the army surplus store tomorrow morning and buy a flak jacket… and a steel helmet and all the gear…. Cuz I am confident that there will be terrorists in the tent city tomorrow. If not tomorrow most certainly the next day. Mother Jacinda said so.

Speaking of Mother … I was hoping to catch a glimpse of her. There’s a wonderful balcony on the parliament buildings… Surely she could make an appearance and do her best impression of Marie Antoinette?

I get it… she cannot address the thousands of people on the lawn … too risky … terrorists… they are everywhere… but nowhere.

Here we are again in Wellington … pouring rain yet many, many, many thousands have turned up (I was trying to count but with all the coming and going it was impossible – so let’s say… 8000?) … I think a lot of people were hoping that Ardern and Hipkins would finally show up and wrestle in the mud (conditions are perfect!) but no such luck… maybe next time. The downpour is somehow fitting – and reflective of the current state of affairs.

Big shout out to the Hare Krishna folks – awesome job of chanting a message of peace – that’s a truly mesmerising tune they are belting out all day long… in fact, I can’t get it out of my head.

I find myself having to limit my time on that side of the pitch otherwise I begin to enter a trance and am tempted to join the group and stay in Wellington permanently – and who’ll feed my dogs back in Queenstown?

I am told that, despite the weather, Dear Leader was out on the golf course today and shot 27 over 18 holes. She’d be dominating the LPGA tour but her people need her more. I understand that she was quite the DJ in her prime – apparently world-class – she once filled Wembley for a rave. I also heard that Clarke was active on Tinder earlier (he goes under an assumed name and has a fake moustache – but it’s definitely him). JA doesn’t let him join her for golf cuz he slows her down.. so he pursues his own hobbies. Everything.. is as it should be. Until it changes.

Caught – red-handed. She claimed she was knitting a scarf for her grandson but we know what these two are up to – they are the masterminds and they are in there up to no good. They are conspiring to overthrow the Dear Leader and install themselves as our new and improved tyrants.

And here we have a mother and daughter who work for the protester propaganda wing drawing what are very clearly subversive chalk messages on that wall. Where are the riot police – why is this allowed! (please share these images so that everyone sees that NZ is under siege).

Extremist. Without a doubt. She may look friendly but she’s got nothing but malice on her mind.

And then there’s this guy. Marching around banging on the Dear Leaders head. How dare he! That is not allowed. And making these accusations against Pfizer – when everyone knows Pfizer loves us. Terrorist. 100% Guaranteed. Why are the police just standing there – do something – protect the citizens of NZ!!!

Waddya reckon this guy’s up to? I am thinking that’s a satellite receiver on his head and he’s getting instructions from the CCP in China. Or perhaps Putin. Or both. Ya both – he’s a double agent and does the bidding based on who pays him the most. Send in the marines. This needs to stop.

And I’ve saved the scariest one for last. Here we have 3 generations of terrorists. Grandma, her daughter, and that’s the newest addition – Baby Terrorist. Notice how they always smile – they’re taught to do that in terrorist school (there is actually a boot camp on Stewart Island where they learn this stuff).

Don’t be fooled. Be vigilant. Be Safe! (and please share so people know what is going on here)

*Words and most photos by Paul Luciw, collated by ExPFC. 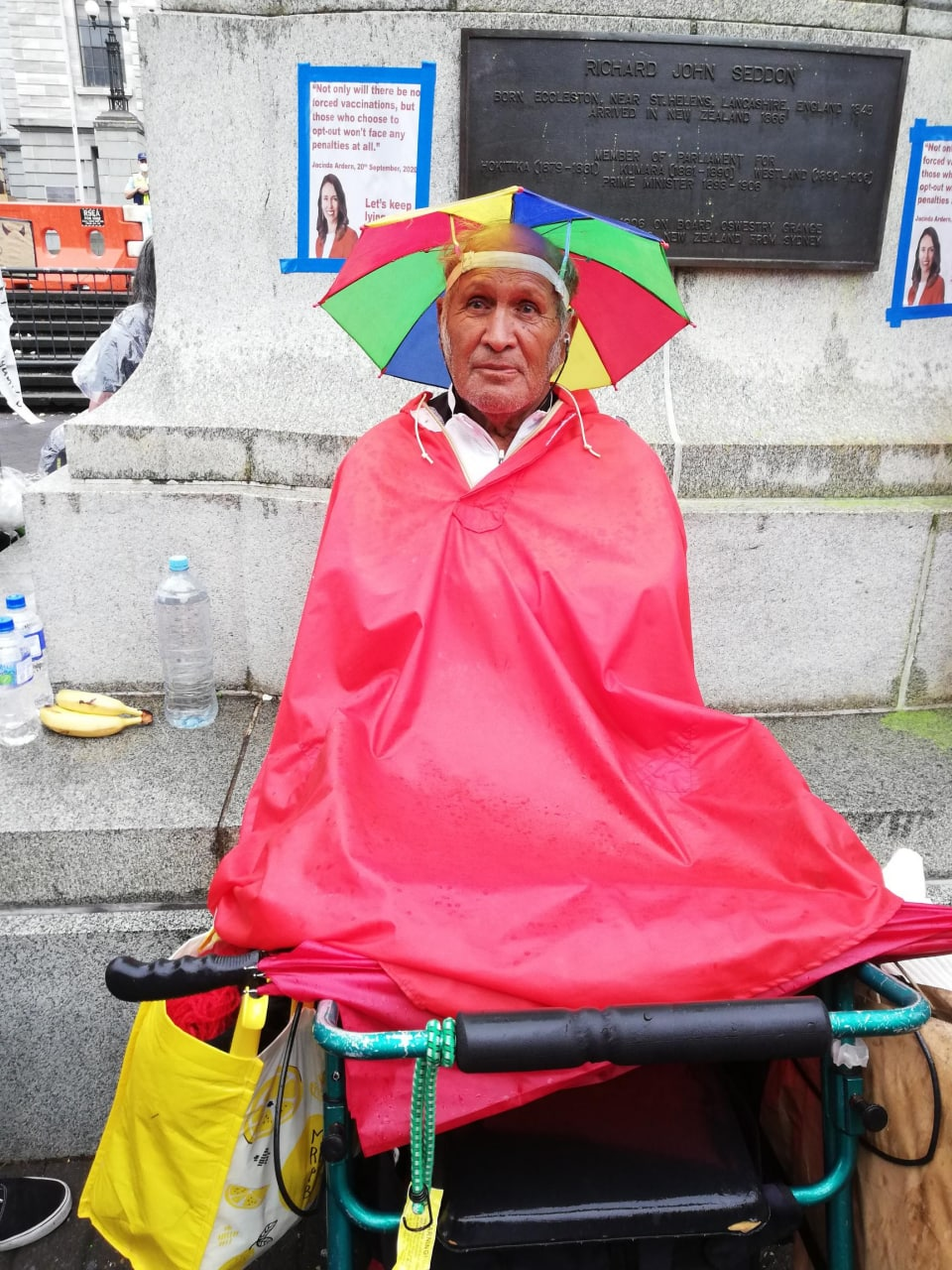