Apparently, the green-left don’t like it when the tables get turned on them.

More and more, ordinary working shmos just trying to get to work have to put up with armies of bourgeois nutbags glueing themselves to roads and trains, blocking critical intersections, and holding up commuters for hours, while they spout their looney nonsense that climate change is going to see your mother, sister and girlfriend gang-raped on your kitchen table (I’m not making that up).

Workers in some industries have to endure pensioned-off Boomers and unemployable Millennials chaining themselves to machinery and stopping the workers from earning a living. We all have to suffer through sourpussed children shrieking that we’re killing the planet (in between checking their brand-new smartphones to see how many Instagram Likes they’ve got).

But when a few cheeky ute drivers turn the tables on the smugmobile brigade, cue much spitting of chips (kale, naturally).

An EV owner found a curious attachment to the Hastings supercharger over the weekend: a fossil-fuelled ute.

The Tesla charging cord was placed underneath the bonnet of the parked Toyota Hilux. With plenty of spots in the car park that day, it was puzzling to see a ute at the charging station, which is situated next to the Karamu golf club.

It’s not “puzzling” at all — it’s a taste of your own medicine, and bloody funny.

This behaviour is on the rise, particularly since the announcement of the feebate scheme offering rebates for electric and hybrid cars and fees for high-polluting vehicles, according to EV drivers.

Although this can happen in a crowded car park, EV owners are particularly frustrated when charging stations are occupied while other spots are free.

Ute drivers are the most common offenders, Fitness said.

It’s irritating to arrive at a charging station to find it blocked by a fossil-fuelled vehicle, Fitness said. The driver could be gone for hours.

Gosh, it’s almost like having to put up with the shenanigans of green protesters, isn’t it?

Fitness said any EV owner would expect to get criticised for doing a similar thing. “It would be like taking a Tesla to a petrol pump… and then locking the car up and buggering off,” he said.

Or glueing a hippy or nosey-nanna to a road. Or blocking a bridge with bicycles.

The ute parked at the Hastings supercharger was a company vehicle, owned by Freedom Strategies. The company manager, Adam Fyfe, said the vehicle was being used by a group of people at the weekend, one of whom was an employee. The ute was not being used for business at the time. Fyfe said he does not endorse the behaviour.

Fyfe asked Stuff not to name his company, and threatened legal action to prevent publication.

Yeah, good luck with that.

Meanwhile, it would be an awful shame if this trend of petrol vehicle owners inconveniencing EV owners caught on, now wouldn’t it? 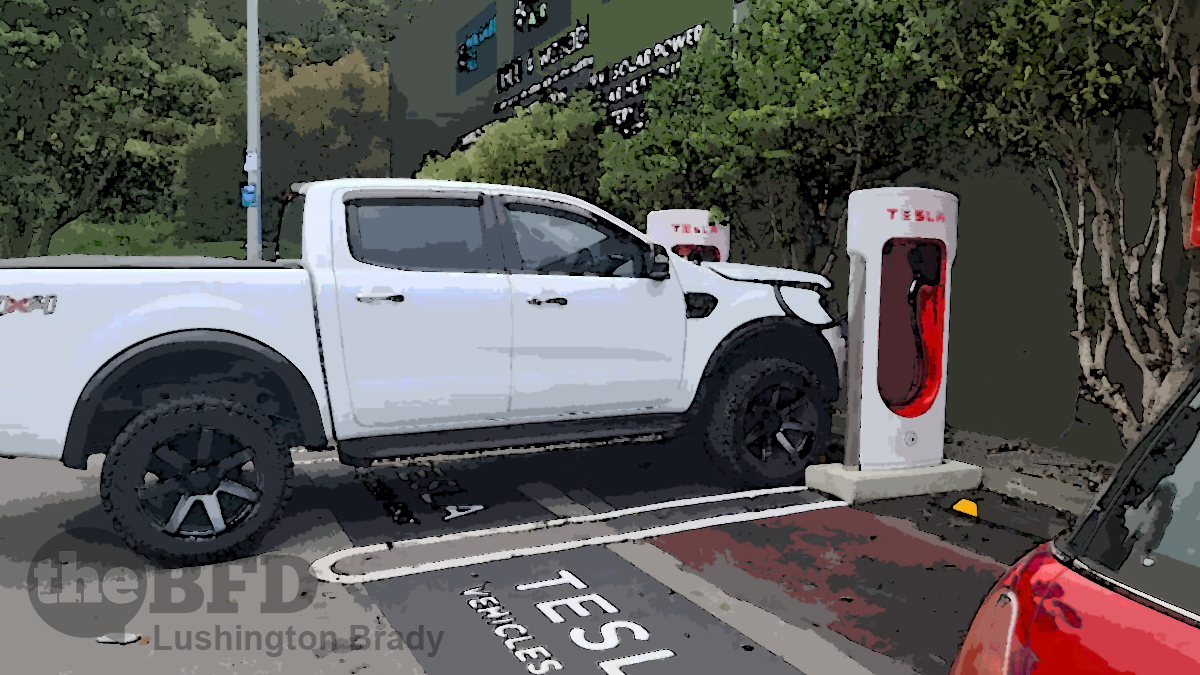