It is traditional to start a new year with a stock-take of the state of the nation. We are now in the middle year of Labour’s three-year Parliamentary term of absolute power. We have learnt a lot about our Prime Minister and the forces that drive her.

While Jacinda Ardern claims she runs an open and transparent government, we now know that is a lie. Her election-night promise to govern for all New Zealanders was also a lie.

Without any public mandate, she has taken away democratic rights from communities and freedoms from individuals. Not only has she embedded the radical socialist agendas of the United Nations and the World Economic Forum into our legal and regulatory framework, she is now attempting to replace one of the world’s oldest democracies with tribal rule. These are the actions of a totalitarian regime.

To make matters worse, under the guise of rescuing the Fourth Estate from the decimation caused by Covid, she is funding much of the mainstream media, undermining their independence, and transforming them from community watchdogs holding power to account, into government propagandists, leaving many New Zealanders totally oblivious to the sinister agenda being rolled out.

When Jacinda Ardern was appointed PM in 2017 by then “kingmaker”, New Zealand First leader Winston Peters, she had only been Labour’s leader for seven weeks.

She had been elected to Parliament in 2008, but instead of resigning from her outside commitments once she became an MP, Jacinda Ardern continued on in her role as president of an international youth communist movement for a further fifteen months.

In 2014, she became a World Economic Forum Young Global Leader. According to their website, they aim “to create a world where leaders take responsibility for a sustainable future, while meeting increasingly complex and interrelated challenges… Today, there are 1,400 members and alumni from more than 120 countries. Notable members include prime minister Jacinda Ardern…”

Founded by Klaus Schwab in the 1970s, the WEF has grown into an elite and powerful global force promoting radical initiatives like the Great Reset and the Fourth Industrial Revolution.

When Jacinda Ardern announced in 2019 that she was introducing a budget that focussed on ‘wellbeing’ instead of GDP, most Kiwis were unaware she was enacting a key element of the WEF’s Great Reset agenda.

Similarly, most Kiwis are unaware she agreed to trial a WEF Artificial Intelligence pilot programme – a key part of their Fourth Industrial Revolution initiative – in New Zealand. A White Paper published in June 2020 outlines the details.

During her address to the 2019 WEF annual Davos meeting in Switzerland, our PM revealed she is using her time in office to embed reforms that will lead to permanent change:

As she told an overseas audience in 2019, she has used that strategy to embed the United Nations Agenda 2030 into our legal and regulatory framework:

“My Government is doing something not many other countries have tried. We have incorporated the principles of the 2030 Agenda into our domestic policy-making in a way that we hope will drive system-level actions… It is about fundamentally changing how we make decisions and allocate resources…”

Last September, however, we learnt that was not enough, when the PM told the UN General Assembly:

“We simply cannot achieve the 2030 Agenda unless we unite with collective ambition to reverse biodiversity loss by 2030. We have an opportunity to do this by adopting and implementing an ambitious and transformational post-2020 global biodiversity framework at the upcoming Conference of Parties. New Zealand is committed to this, and I urge you to join us.”

And in November, through her address to APEC, we learnt of her commitment to the WEF’s Great Reset:

“Every crisis presents an opportunity. And the 21 APEC economies have been dealt a heavy burden, but also an opportunity to strike an economic reset on a scale we haven’t seen since World War 2… We must not allow the post-COVID recovery to return to business-as-usual.”

It is astonishing that we have to listen to the PM’s speeches to overseas audiences to find out what her agenda is here at home. By failing to be open and transparent about the elite agendas and radical reforms she is introducing, she is treating Kiwis like fools.

It’s not just the global elite that are unduly influencing our Prime Minister, but the tribal elite as well. In fact, in an act of gross betrayal, Jacinda Ardern has authorised a suite of policy changes that will undermine democracy itself.

Under her guidance, a massive transfer of power is now underway, that is replacing New Zealand democracy with tribal rule. This audacious agenda for iwi control of the country was set out in the Government’s 2019 He Puapua report that was kept deliberately hidden throughout 2020 – not only from her coalition partner, but also from the public during the election campaign – even as parts of the strategy were being enacted.

Claiming “co-governance” is about fairness and equity, we now know that the real agenda is to enable privileged Maori to seize control of public resources and service for the private benefit of the tribal elite.

Under the guise of implementing the UN’s Declaration of the Rights of Indigenous Peoples, a powerful tribal minority is being given control and veto rights over all other New Zealanders. The ultimate goal is to establish an elite iwi aristocracy, that bestows privilege on those of Maori descent, relegating everyone else to second-class status.

Through Labour’s power to govern alone – and with the support of a complicit media – the agenda for Maori supremacy is now being fast-tracked by Prime Minister Ardern as she delivers control of our country to the unelected and unaccountable representatives of multi-million-dollar private sector iwi corporations, one co-governance deal at a time.

The interview failed to mention a raft of other separatist policies that have been introduced including forcing race-based representation into local government, introducing tikanga into the law, and requiring the public service to not only adopt the fictitious Treaty principles and the fabricated Treaty partnership, but to implement racial privilege across the board.

Looking ahead it is clear that the racial divide will grow wider and deeper as Labour’s Maori caucus forces through an increasingly ambitious tribal supremacy agenda.

With so many underlying forces at play, what awaits us in 2022?

As a result of the Government’s irresponsible financial management and reckless spending, the Covid-19 stimulus has fuelled rampant house price inflation, and rising costs. There has been a massive waste of taxpayers’ money and the creation of eye-watering debt, all of which will invariably lead to future tax increases – no doubt justified as being in the interest of “fairness and equity”.

With interest rates now rising, the economy will increasingly become an issue for this government which has yet to demonstrate that it can manage a cake stall let alone an economy.

Then there’s Three Waters – these reforms, which are expected to be progressed in March, will confiscate billions of dollars of ratepayer-funded assets from councils, in order to pass control of water services to the tribal elite.

Nanaia Mahuta’s overhaul of Local Government – under the guise of a make-believe Treaty “partnership” – will see it stripped of power, with much transferred to iwi. The discussion document outlines that a “consultation” process is planned for later this year, but in reality, it will be yet another bogus exercise – a façade to disguise Minister Mahuta’s radical plan for the tribal takeover of local government.

It will also be a big year for climate change. Carbon taxes are starting to bite, not only forcing up the cost of goods and services across the economy – and putting pressure on household budgets – but the incentives are leading to the conversion of productive farmland into unproductive pine forestry that will never be maintained nor harvested.  It is insane economics that will cause irreparable harm to rural communities and starve our economy of much needed export earnings.

A rise in Green Party activism can be expected this year, as Labour acknowledges it will need the Greens to win the next election and seeks to appease the Climate Change Minister James Shaw.

Environment Minister, David Parker, will continue his radical overhaul of environmental law to replace the Resource Management Act – without attracting attention. The tribal elite are again expected to be the big winners, gaining an even stronger influence over environmental decision-making than they already have.

This year, the Government has signalled it is planning an ACC-type social insurance scheme jointly funded by employers and employees, to reduce the need for welfare benefits. The move will be controversial, especially for businesses that are struggling to keep afloat amid Covid disruptions.

Covid, of course, is the big unknown. If we follow the lead of Britain, once New Zealand has emerged from the imminent Omicron outbreak, as Prime Minister Boris Johnson has explained, the virus will be endemic and should be treated like the flu, with all vaccine mandates abolished, along with facemask use and other restrictions for the general population.

In the meantime, with an outbreak still to get through, we continue to wait for the Government to protect New Zealanders and help families deal with Covid infections through the use of effective preventatives and home treatment options – as other countries have done, when faced with skyrocketing cases.

This week’s NZCPR Guest Commentator, former Judge and Law Lecturer Anthony Willy, has also been examining the state of our nation and has provided a very thoughtful analysis of the performance of the Ardern Government:

“There are only two ways of governing a society, one is by the diktat of the few to the many and the other is with the willing participation and consent of the many – eloquently expressed in 1776 in the American Declaration of Independence: ‘Government of the people by the people for the people’. This is what we call democracy and which Winston Churchill described as ‘the worst of all systems of government but better than all the others.’ Dictatorship of the few over the many cannot co-exist with democracy.”

He discusses Marxism and explains that its fundamental goal is to “destabilise existing democratic societies and substitute a new power elite which is the complete antithesis of the basic human yearning for personal freedom and participation of the masses in the governing  of society” – and he concludes that the divide and rule strategies enacted by Jacinda Ardern “is vintage Marxism. Nowhere in the world has this malign theory succeeded in displacing a functioning democracy. If it succeeds, then New Zealand will be unique in allowing its democracy to be replaced by tribalism.”

Without a doubt, 2022 will be a defining year as the Government attempts to force through radical and unwelcome changes. Following the unusual decision by the Labour Party at their conference in November to change their rules to allow Caucus to replace their leader, there is growing speculation that Jacinda Ardern may step down as Prime Minister. And there is some logic to that possibility, especially as the public lose confidence in her ability to govern for all New Zealanders.

No matter what happens, this will a critical year, when once again the public will need to step up to defend our democracy against all attempts by authoritarian politicians to take it from us.

*How optimistic or pessimistic do you feel about the coming year? 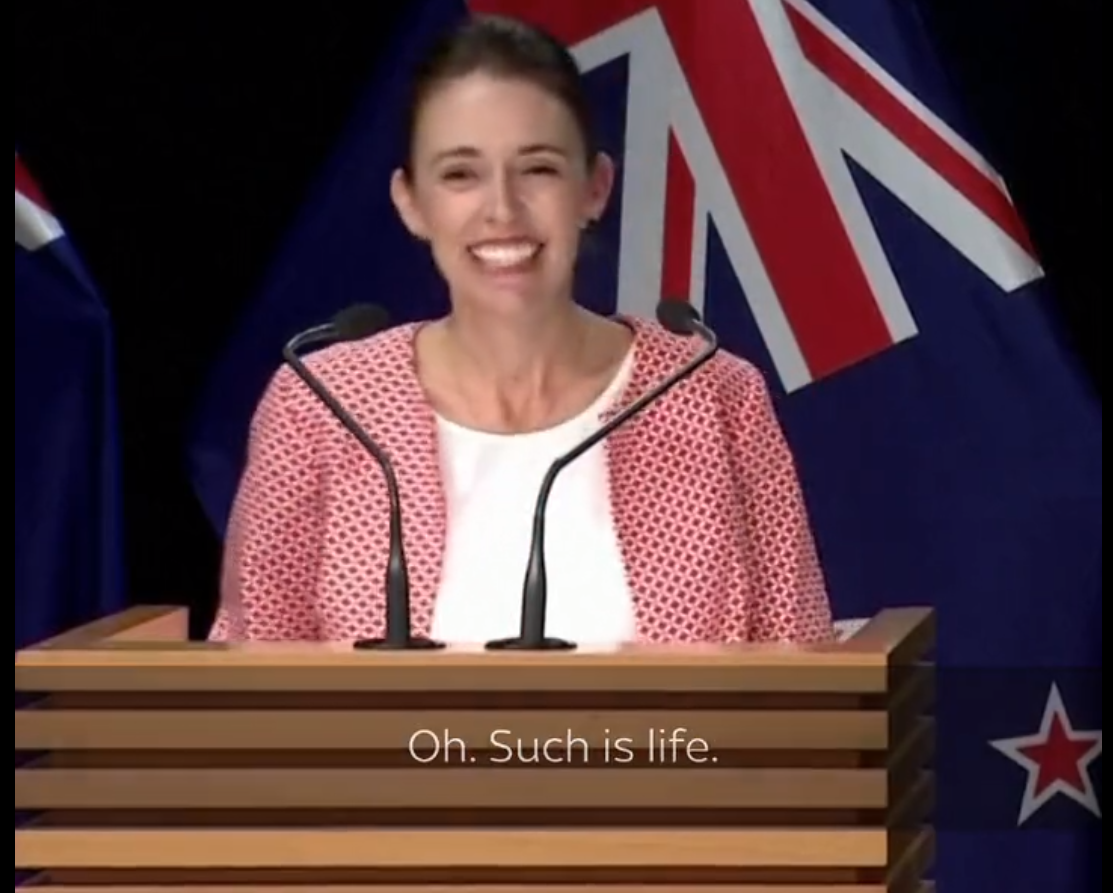