Skip to content
Mainstream media are colourblind when it suits them. The BFD. Photoshop by Lushington Brady.

Reading Stuff’s account of a vicious attack on an Auckland bus driver, something is conspicuous by its absence: there is no mention whatsoever of the ethnicity of either the attacker or driver.

This might seem a curious omission, given that the offender has so far escaped unknown, so a description might be of use, but it is in fact just another in a distinct trend in mainstream media reporting in NZ and Australia.

For instance, where the assailant can be safely “described as pakeha”, or “of European appearance”, the media have no hesitation. Otherwise, it’s only ever “a group of teens”, “a man”, “a family”, and so on.

Victims are much safer territory for the media, and so are invariably described by ethnicity. Unless it’s white, oops “pakeha”, because by media definition, attacks on whites by offenders of a different race are never “racial”.

And, as we see, dust-ups between non-white ethnicities is even more problematic for the media. Best to just scrub it all and hope no-one notices.

Because, if Stuff were forced to admit that it was a racial attack, they’d be forced to report an even more outrageous fact: the victim of the racial attack is the only one who’s been punished.

An Auckland bus driver who was punched in the face by a disgruntled passenger has received a final warning for kicking the man in the back.

Of course, Stuff can’t help but give the driver’s name, which is kind of a giveaway.

It was another busy Friday night on Alex Jeon’s inner link bus in Auckland when a man in a hi-visibility vest hopped aboard at the Queen St stop near the Civic.

He was the final passenger to get on.

Shortly after he swiped his HOP card and the doors closed, the bus set off.

The passenger took issue with the driver starting before he was seated and delivered a series of expletives.

Jeon told the passenger to shut up, then matters escalated.

The passenger unleashed a powerful left cross at Jeon, striking him in the side of the head as he drove, rendering the driver temporarily dazed.

Footage obtained from one of its CCTV cameras shows the driver pursuing the man down the aisle.

The other camera shows Jeon grabbing the handrails on the bus, hauling himself into the air and kicking the man in the back with both legs.

After stumbling, the passenger turns around and throws a forceful left hook at the driver. It doesn’t land.

At which point, I suspect most of us are cheering for the driver. Especially those of us who’ve ever driven buses or taxis and had to put up with abusive, sometimes violent idiots.

Jeon spent the night in hospital and several weeks recovering. He hopes to return to work next week, his union says.

Early in the New Year, his employer, NZ Bus, held a disciplinary meeting related to allegations he assaulted and verbally abused the passenger who punched him, and did not wait for everyone to be seated before setting off.

The company upheld the allegations and gave him a final written warning.

Tramways Union president Gary Froggatt said Jeon was not properly trained on how to handle the “violent unprovoked assault”.

Was the attack even partially motivated by racism? It’s hard to tell, given how diligently the CCTV video has been edited. Indeed, it may well have been just a case of a violent creep who’d take a swing at anybody on the slightest provocation.

But ask yourself: would Stuff have hesitated for an instant to dub it a “racial” attack had the offender been white?

Meanwhile, the fact remains that the only person who has been punished here is the victim. 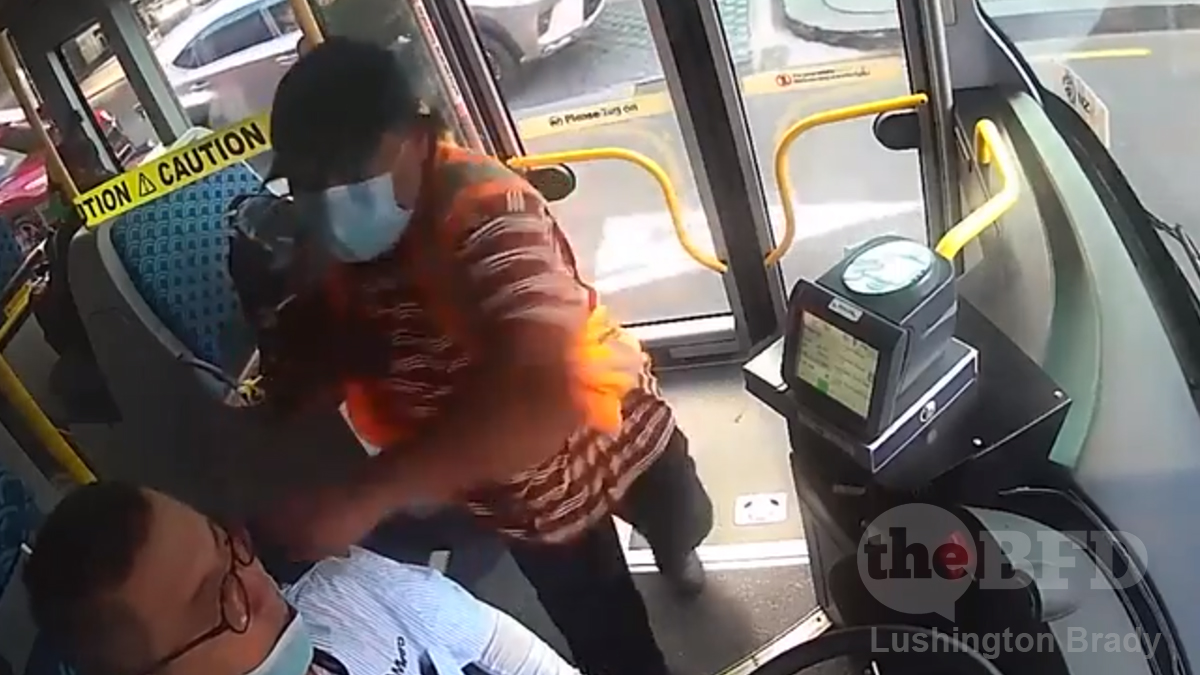