Everything in this series of articles is my own opinion. My decisions are my own and not recommendations to anyone else. While at this stage I have chosen not to vaccinate against covid, I have taken a considerable amount of time and effort to help improve my odds, not just against Covid, but all infectious diseases.

3. Trust in the Pharmaceutical Industry

If you are buying a car and wish to establish its reliability before making your purchase, which expert are you most likely to trust? The AA mechanic who is inspecting your car, or the car dealer who is selling it to you? Pharmaceutical companies don’t sell science – they sell a product.

The Pfizer contract offers a rare glimpse into the power one pharmaceutical corporation has gained to silence governments, throttle supply, shift risk and maximise profits in the worst public health crisis in a century. Drug companies are a PR juggernaut, spending billions of dollars lobbying government and influencing health care, with the sole purpose of maintaining inflated margins. There are serious ethical issues in the relationships between regulatory bodies and pharmaceutical companies.

Saying that a multinational pharmaceutical corporation is prioritising their profits and global image over public wellbeing is not a “conspiracy”. The corruption of the Medical Industrial Complex has become a growing concern among many in the medical profession. In 2009, Pfizer was sued for 2.3 billion dollars (including a 1.3 billion criminal fine) for off-label promotion and kickbacks for Bextra, Geodon, Zyvox and Lyrica. These are just some in a long list of settlements and criminal charges against multiple drug companies over the last few decades. Practical suggestions to remove the potential for corruption and conflicts of interest have so far been ignored.

There is convincing evidence that good health, sufficient vitamin D, and a strong immune response are an effective defence against Covid, ‘flu and all their future variants. I don’t want to be subscribing to Pfizer’s subscription model and forever taking vaccines and boosters that support a company whose ethics I find offensive and which is primarily driven by greed.

“It is a tragedy for all of us that the devastations of the current pandemic have come at a time just when the extent of corruption within the medical industrial complex by powerful vested and financial interests has become undeniable and has made trust very hard to come by”.

4. Trust in the Vaccine Safety Data

Diethylstilboestrol (DES), the swine flu vaccine, Accutane, Vioxx (rofecoxib), Rezulin, Oxycontin… Pharmaceutical companies have a long list of approved drugs that have done immense harm or have been withdrawn because they turned out to be unsafe.

There is no possibility that we can know for sure that these will be safe with no long term problems and it is presumptuous to make such claims. It took decades to discover how harmful DES turned out to be. Drug companies have shown over and over again they do not care about the health of individual patients and their only interests are in profit.

Despite numerous requests from doctors and scientists, Pfizer’s trial data have not been made available to the public for peer review and it won’t be till the end of 2025. The FDA has asked a federal judge to make the public wait until the year 2076 to disclose all of the data and information it relied upon to license Pfizer’s COVID-19 vaccine. Lawyer Siri Glimstad has spent months trying to obtain these documents on behalf of concerned scientists, professors, and other academics. The FDA’s request to drag out the release of this information by 55 years has raised questions about the legitimacy and safety of the COVID-19 drugs.

Without data, it is not science.

The British Medical Journal has revealed concerns about poor practices at a contract research company helping to carry out Pfizer’s pivotal Covid-19 vaccine trial that raises serious questions about data integrity and regulatory oversight. The response from government health officials has been, “The Covid-19 mRNA vaccines have proven to be safe and effective.” How does this make any sense as a response to these accusations? It’s like they are just reading from a Pfizer marketing brochure!

On November 5th, 2021, an expert panel of independent scientists, researchers and doctors, chaired by Senator Johnson, assembled on Capitol Hill in a bid to discuss failures in VAERS, the lack of follow up care, and the inadequate recording of the vaccine injured, including those in the clinical trials. Why has the research on a considerable number of vaccine-injured not been released to the public? The fact that none of the representatives of the drug companies or the regulatory bodies bothered to turn up was telling. These problems remain unresolved.

There seems to be a considerable amount of political and industry pressure on regulatory bodies in the the USA to approve the use of the vaccines. Two senior officials of the FDA have resigned and one of the panel members, Dr Michael Kurilla, abstained from the 5-11 vaccine decision due to concerns over a lack of safety and efficacy data. FDA committee member Dr Eric Rubin was asked if the benefits of the vaccine for children outweighed the risks. His reply was, “We’re never gonna learn about how safe the vaccine is until we start giving it… that’s just the way it goes.” I realise the EUA approval was so children with comorbidities could receive the vaccine but that’s not what will happen. There will be heaps of paranoid parents queuing up to vax their perfectly healthy children. And they will be condemning parents that don’t.

Boosters are rolling out on a population that had trial data for only 200 subjects, testing antibodies after only 4 weeks, which will never be peer-reviewed and the Pfizer study had no control group. This is not how safety protocols are supposed to work. The studies on ivermectin are better than this.

There is now strong evidence that there is more risk of young men developing myocarditis from the vaccine than being hospitalised with a Covid infection (this is why safety trials are supposed to be over years, not months). Several New Zealanders have died as a direct result of the vaccine, and there are tens of thousands of people who suffer from myalgic encephalomyelitis, who cannot get exemptions, who have an extremely high chance of a serious adverse event from the vaccine that may result in long term debilitating distress.

The Canadian Covid Care Alliance Group (a group of over 500 doctors, scientists and health care workers) have released a paper showing that vaccines are doing more harm than good.

The Global Covid Summit, an international alliance of medical practitioners and medical scientists whose core principle is to uphold the Hippocratic Oath, has received signatures from over 16,000 health professionals, declaring that children should not be subject to forced vaccination and that health authorities should recognise natural immunity.

Six months ago the Pfizer vaccine was touted as safe and effective, then it became apparent it wasn’t that effective, then it seemed it wasn’t so safe – but effects were very rare. Now it seems serious events aren’t quite that rare after all. Then Rory Nairn died of myocarditis, a disorder resulting from the vaccine. Myocarditis is the inflammation of the muscle of the heart. Apparently, we are told, this is a ‘mild’ side effect!

It doesn’t matter if injuries from the vaccine are rare: I strongly disagree with the concept of “the greater good”, especially for a vaccine that isn’t even close to sterilising immunity, and for those who have little risk of serious infection. It is abusive to force people to take or continue to take medication when they know those who have been injured or they themselves have experienced a serious adverse event.

The Labour Government, by removing our choice, is playing God by deciding who will suffer. Is it moral to mandate the vaccine unless it is 100% effective and 100% safe, for 100% of the people that take it? 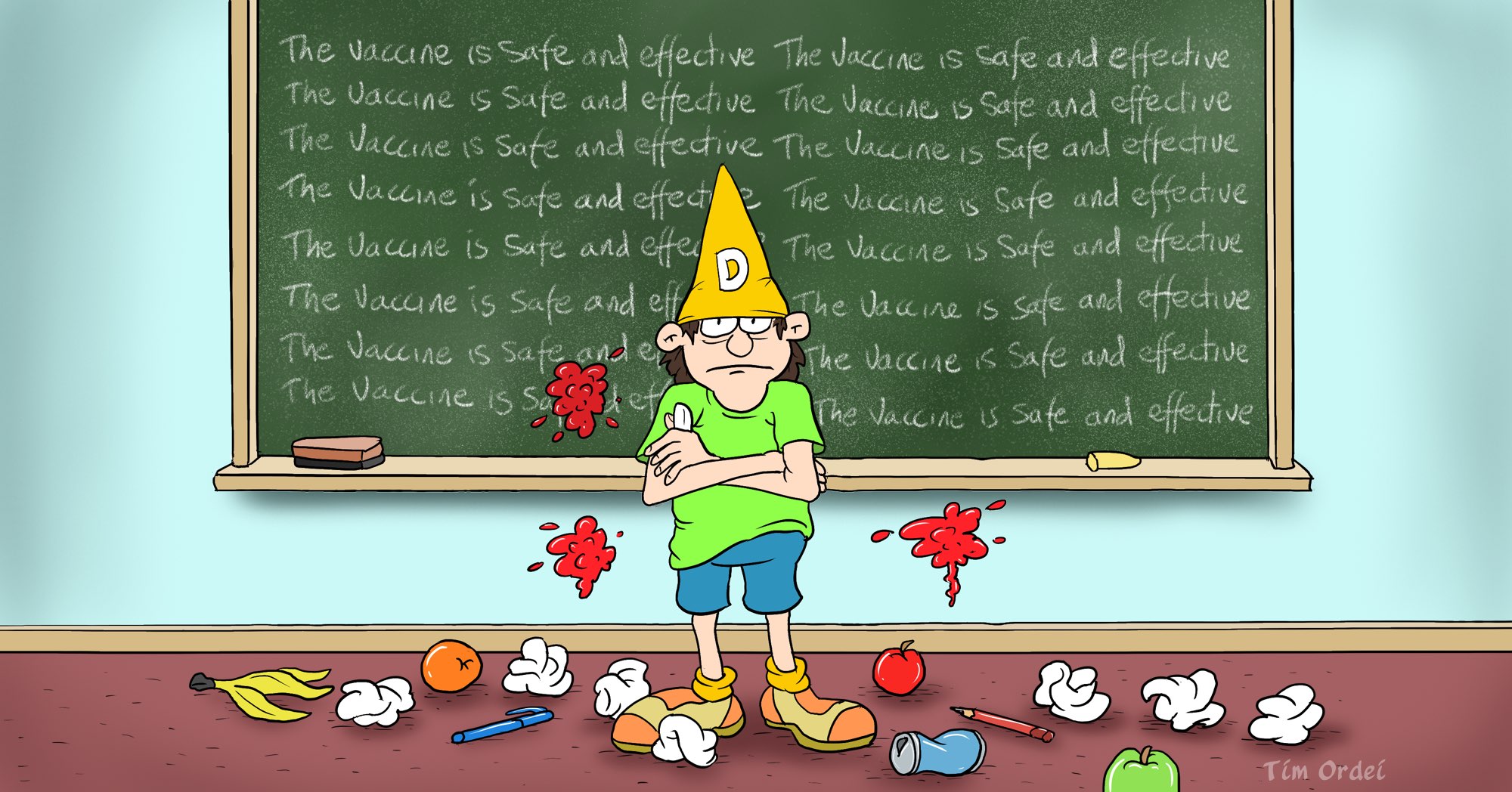