Transgenderism has to be the biggest own goal in the history of feminism. Not that feminism isn’t littered with own goals: for all the gains that women undeniably made in the first, and to a lesser extent the second, waves of the movement, there is plenty of evidence that more recent decades of feminism have also left many women feeling downright miserable.

Third-wave feminism and its ideological cousin, transgenderism, though are the ideological equivalent of women picking up the metaphorical rolling pin and beating themselves to death with it.

As many older feminists are noticing, transgenderism is steadily blotting out women. From literally erasing thousands of young girls who are suddenly “boys”, to nullifying the biological essentials of womanhood, to biological men, often with beards and too-obviously functioning penises, invading women’s most private spaces — and especially sport. Journalist Jim Goad predicted years ago, of the mania for “transgender inclusion” in women’s sport, “stand by for a lot of crying”.

The Crying Games have well and truly begun.

A spate of wins by transgender women in elite US college swimming has prompted top female athletes and women’s groups to warn the Biden administration, which has granted men who’ve artificially become women the same rights to compete as biological women, it will destroy women’s sport altogether.

The victory of 20-year-old Yale swimmer Iszac Henig, a female transitioning to be male, over Pennsylvania University’s Lia Thomas, a male who has transitioned to be female, in a women’s inter-college swimming race last week prompted outrage among parents and calls for the sport’s governing body, the National Collegiate Athletic Association, to clarify the rules.

The rules are simple: shut up, girls, and take your lumps. The future belongs to the bearded ladies in this mixed-up, muddled-up, shook-up world where girls will be boys, and boys will be girls and your children belong to the state and its tranny industrial complex.

Cynthia Monteleone, 46, a mature age athlete who competed against biological males in 2018 and 2019 world championship track events, told The Australian the trend was the beginning of the end for women’s sport.

“No words can convey what it felt like spending hours away from my family, being in tears on the track because was so hard, only to show up with someone who is biological advantage,” she said in an interview.

“The mainstream media doesn’t tend to report these stories because they don’t want to, but there’s no getting around Lia Thomas – it’s too big a story,” she told The Australian.

Ms Thomas, 22, who had been on the university’s male swim team until coming out as transgender in 2019, shot to national prominence last year after smashing a series of women’s swimming records, prompting her female teammates to consider a boycott in December last year.

Let me guess: he was a lacklustre athlete at best as a man. Sure enough: Will Thomas finished second in 2019 as a man, but smashed records a few years later as a “woman” (who, even in “post-transition” photos, is clearly packing a bulge in “her” shorts that would make Michelle Obama blush with envy). Still, that “record-smashing” effort remains a solid minute behind the men’s world record.

But if women — actual women — think that the establishment is going to stand by them, they can think again. It’s a mad, mad, mad, mad world all right and the clowns are firmly in charge of the circus.

The NCAA stated repeatedly throughout 2021 that it “firmly and unequivocally” supported transgender athletes, amid a growing backlash across the US that’s prompted at least 10 states to ban transgender women from women and girls sport.

The Ivy League, the group of elite US universities overseeing the controversial swimming competition, last week “reaffirmed its unwavering commitment to providing an inclusive environment for all student-athletes while condemning transphobia and discrimination in any form”.

Back in my youth, pre-Rainbow Enlightenment, I remember a cartoon showing a henpecked fellow in a surgeon’s office, with the doctor saying, “A wish to ‘be on the winning side for once’ is not sufficient grounds for a sex change, Mr Malloy”. Well, that one aged like milk in the sun. In fact, the suspicion that unscrupulous male second-raters are “transitioning” solely in order to win for a change is only underlined by the statistics:

Monteleone, who is in training for the world masters athletic championships in Finland this year, said her 16 year old daughter Margaret, recently came second to a trans female who had only started training two weeks before the high school race.

“Her teammates were crying because one of them said to me why should I even try to train for the championships ships when we all know who is going to win,” she said. 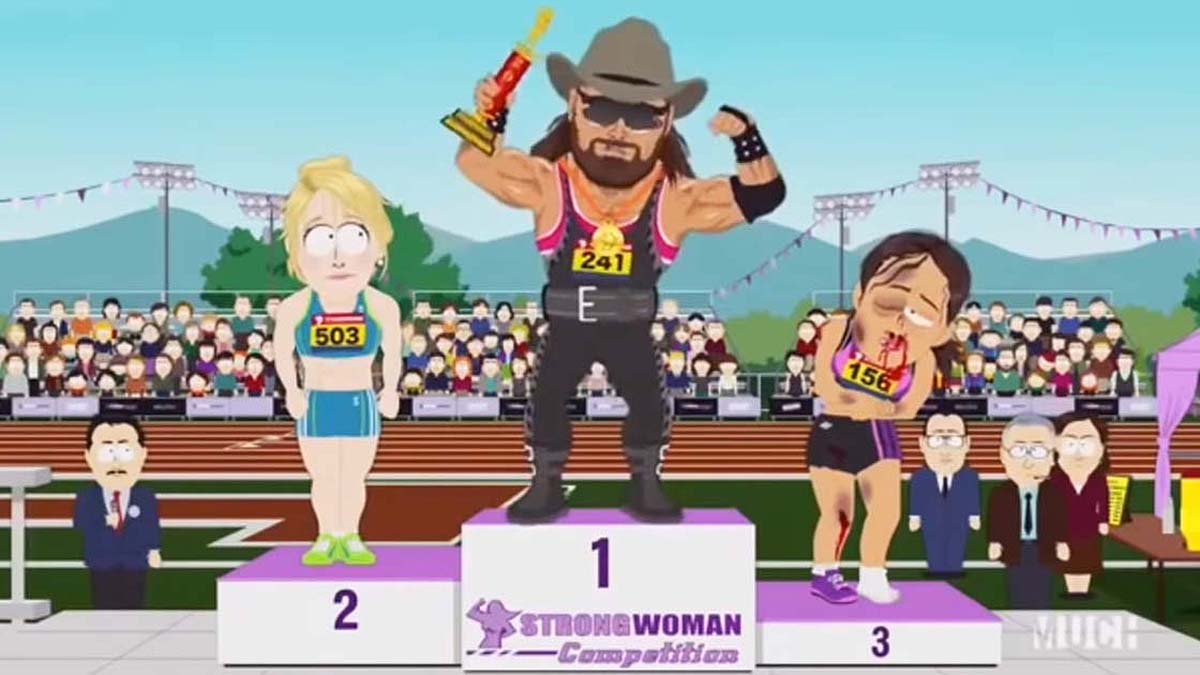