Following World War I, fascism evolved in Europe as a political and economic system. Extreme nationalism, authoritarianism, and a state-run economy are its three main traits. Indeed, in terms of economics, fascism is primarily a left-wing ideology, with more in common with socialism than any conservative, free-market system. Remember that the term “Nazi” stood for “National Socialists.” Fascism was dubbed “the third way” by none other than Benito Mussolini, who referred to it as a statist alternative to socialism and communism.

The “Third Way” is also a term used by the left in modern times, most famously by Tony Blair, whose office Jacinda Ardern worked for as she earned her political chops.

Instead of truly controlling the means of production, the fascist state enables them to stay in the hands of private persons and then prescribes what they may and may not do to those business “owners.”
As a result, the state essentially chooses economic winners and losers based on the industries and individuals it favours.

Using my definition of fascism, Jacinda Ardern’s response to the COVID-19 pandemic has been a textbook example of practical fascism at work, since they match at least two of the three conditions — a desire for state control over the economy and a proclivity for authoritarianism.

And we are clearly seeing this from the Ardernist Government as it descends further and further into fascism. How else can you describe their confiscation of water assets and the centralisation of control of the entire health system? How else can you describe the polarisation of society into the good (vaccinated) and the bad (un-vaccinated) along with restrictions on whom businesses can deal with? How is it not fascist to destroy the oil and gas industry and then promote failing new green tech to replace some of the most efficient energy systems ever invented with less efficient systems?

In their embrace of the “Green Economy,” their collusion with Big Tech to stifle free speech, the increasing state control over the media and their draconian Covid policies, the Ardernistas are salivating over what they see as their golden opportunity to choose economic winners and losers – the winners, of course, being those businesses and business persons that most closely align with their left-wing ideology. The rise of the woke is the rise of cultural fascism.

Perhaps the most glaring example of how New Zealanders have embraced their inner fascist is watching the demonisation of the un-vaccinated, under clear instruction from Jacinda Ardern, by the vaccinated. A truly disgusting ‘us vs them‘ attitude that is as pervasive as it is unedifying on social media.

The attitude is also embraced by the complicit and compromised mainstream media, who attack people for their health choices and demonise pro-choice people as religious cranks or anti-vaxxers.

The other clear indicator that fascism is at work is the obvious use of demonisation by members of the public against those the state has determined are untermenschen, the un-persons, the un-vaccinated. The great thing about this pandemic and social media is we get to see exactly the type of people who would have enabled the Nazis back in the 1930s. Sadly, some of them are our friends.

People who would normally stand against racism, or anti-Gay sentiments are vociferously attacking people who have simply made a different health choice to them. Somehow they think it is OK to demonise people for making a different choice to them. Yet they don’t demand that people prove they don’t have HIV, or Hepatitis, or a myriad of other communicable diseases. For some reason, the brainwashing over Covid is now manifesting itself in totally illogical rule making and enforcement.

Some are even calling for internment camps for the un-vaccinated, or isolation ships anchored offshore. This is how far New Zealand has descended, increasingly reminiscent of 1930s Germany, which is becoming hauntingly familiar with every additional step towards the totalitarian fascist state Jacinda Ardern is marching us towards.

Ardernist pandemic policy has been demonstrably and undeniably authoritarian, with forced and continuing lockdowns, mask mandates, church closures, limits on family gatherings, forced vaccine mandates and the creation of a gulag in Auckland.

In fact, those measures have crossed the line from merely authoritarian to actually totalitarian. Witness the fines, arrests, and calls for neighbours and family members to rat each other out — all conditions you would expect to find in a communist or fascist dictatorship but not in New Zealand.

The Government has literally borrowed the playbook of almost every totalitarian leader from Adolf Hitler to Josef Stalin, to Pol Pot in subjugating the New Zealand public using fear and division.

The media and Jacinda Ardern have been painting a bizarre and illogical picture, one where the vaccinated are protected from a tricky virus but somehow need to be fearful that they are not protected from the un-vaccinated. And 70% of New Zealanders believe it. But they have been frightened by a callous and uncaring Government beyond all logic and reason. Take the current Delta outbreak as an example. There have been thousands of cases but only two deaths and those were old and unhealthy with multiple co-morbidities.

The chances of dying from Covid in New Zealand are less than your chance of winning first division Lotto. More people have won first division in the past 18 months than have died from Covid.

But back to the point of this article, everything dictators do has always been “for the greater good,” at least according to them — although the millions slaughtered as a result of their “benign” policies in Nazi Germany, the USSR, China, Cambodia, and Cuba might disagree. We are continually told that these restrictions on our freedoms are “for our health”. They are not. They are for control.

Ardern’s pandemic policy is demonstrably fascist in that it exerts government control over our economy, decreeing which businesses can stay open and for how long, which ones must close, how many customers they can serve, and when. Essentially, under the guise of protecting us from a disease that most of us won’t get, much less die from, Ardern and her un-elected health bureaucrats are gleefully sorting out economic winners and losers while erecting internal border controls and measures to further control the people.

And who are the big winners in the COVID-19 sweepstakes and in Ardern’s new fascist state? Why, it is those businesses whose leaders have made it clear that they are totally onboard with leftist rule: Facebook, Twitter, Air NZ, the supermarket duopoly, the NZ Herald, Stuff, every other media outlet suckling and sustaining themselves from the public teat. The losers, meanwhile, are everyone else who doesn’t have the clout to promote favoured policies. A classic example of this was the unilateral Government directive over commercial leases that was pushed by the corporate clients of a lobbyist with a close relationship with the leadership of the Labour Party.

It’s obvious that her ‘Be Kind’ catchphrase was nothing more than just an act. A sham, to lull the feeble-minded into believing that she cared while she enacted the inexorable slide towards totalitarianism that we are experiencing. And the majority of New Zealand is egging her on for more draconian controls.

But there is hope. People are rising up and saying no more. They are marching in the streets in their thousands.

It matters not anymore what the media say we should think. People are bypassing the media, and laying down truth bombs that can no longer be ignored.

Slowly but surely people are taking back their lives and freedoms from this demonstrably fascist Government. The state will react, they will attempt to arrest and silence the people, but the next protests will become even larger. Already there are more at the protests in Auckland than there are Police in the whole of New Zealand. They can’t arrest everyone. They can’t prosecute everyone. The tyranny will end when enough people say it will.

We know the fascists are on the run. Jacinda Ardern has gone into witless protection. She’s lacked the courage to come to Auckland and face the protests of the businesses being held to ransom by her failing policies. She’s lost the moral authority to Govern. When the media darlings who have been your cheer-leaders up to this point are now talking about when you are replaced then you know your time is up.

Make today the day that YOU stop complying with the tyranny. Put down your mask, refuse to comply with mandates, support businesses that don’t discriminate based on vaccination status. We can end this Government. We can end their fascism.

Just remember that you can’t comply your way out of tyranny. Act now, defiance not compliance must be your new behaviour. 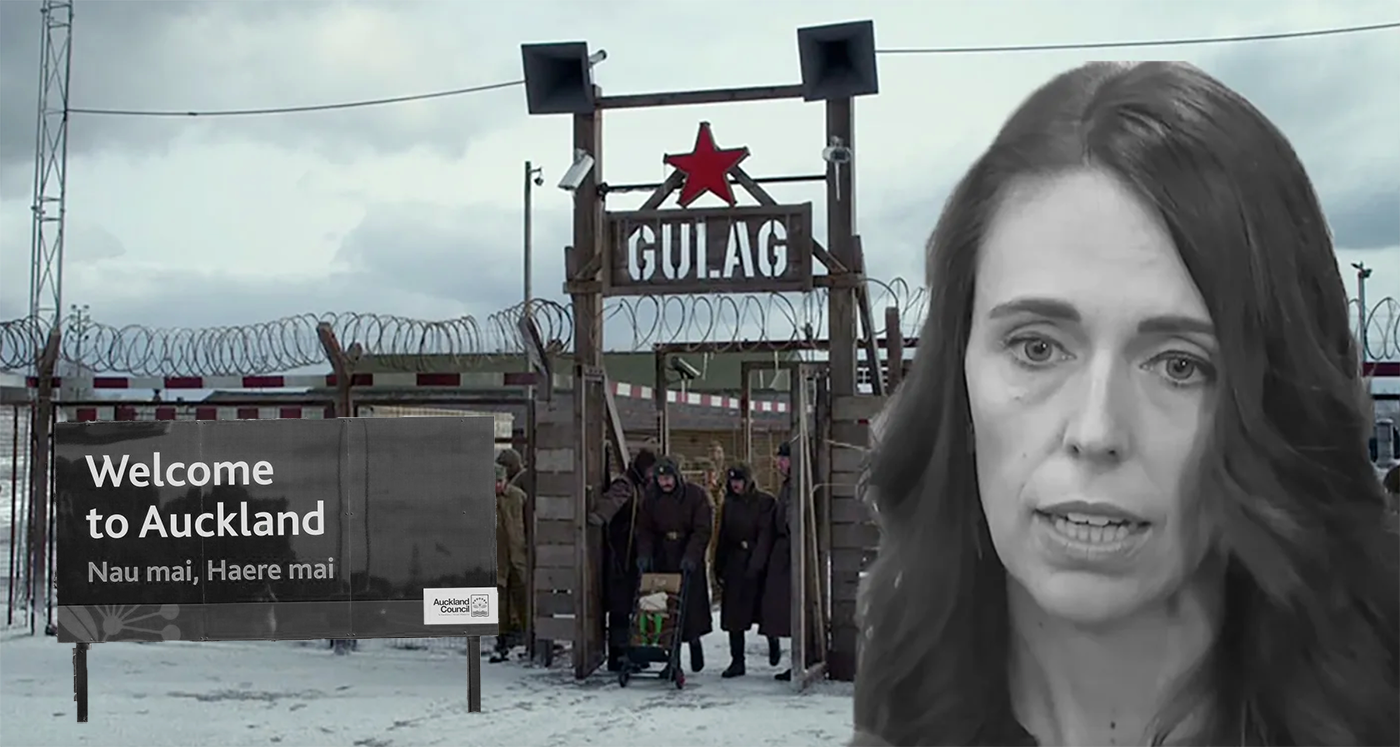