Skip to content
Strength in numbers is a defining characteristic of gangs such as the Head Hunters, who became a legally incorporated society in 1996.

Gang taxing – a sometimes violent form of extortion and retribution – is happening multiple times a week in New Zealand with virtual impunity. Police see the results – often a shocking gunshot injury – but are limited in how they can respond.

Even when a victim ends up in hospital – as many do – they will be reluctant to make a complaint.

However, he says, the evidence is clear that taxing and its consequences have been on the rise in the past five years.

The reason, he says, is that although intimidation has always been a criminal strategy, there’s now more willingness to make good on threats of physical harm.

When police do find out about taxing it is usually through confidential informants and hospital referrals, and police are increasingly responding to callouts where someone has suffered a gunshot wound to the leg – a favoured tactic that will leave a victim alive but maimed or disabled.

Police will talk to victims, but it’s difficult to proceed without a complaint, and they are unlikely to get one because, more often than not, the injured party is involved in criminal activity themselves.

“They are not going to come forward to police and say, ‘I just got a hiding because I was dealing meth in that area, and I wasn’t supposed to’,” Ray says.

“If it happens, and they don’t die or are not crippled, they see it simply as a hazard associated with what they do.”

Most of the time, all police can do is note such events on a file, he says.

“If there is substantial taxing or a violent act, and we think we can prove something, we will approach a victim to say we can proceed with a prosecution for what has been done to you. The vast majority of times, however, they will say no.”

It’s a calculated move not to kill the victim. “They don’t want the person to die, because they don’t want to do a big lag if they are caught. If someone is dead, it becomes a homicide, and we can proceed with an investigation without the need for a complaint.”

Examples of taxing include taking another criminal’s illegal earnings or taking money or goods from people who have committed a range of slights or infractions, real or imagined.

“Redress over disputes is not readily available to criminals through legal channels,” says Ray.

Those who are able and likely to seek protection from law enforcement, which is most of the public, will not be targeted, he says, because the risk of prosecution for the offender outweighs the potential benefits of taxed earnings.

That said, there are cases where innocent people have been caught up in violent acts not intended for them. In 2018, two carloads of Comancheros gang members drove from Auckland to Mount Maunganui to take drugs and money from a suspected drug dealer, only to target the wrong house.

At 4.20 am, they used a sledgehammer to force their way into the home of an innocent couple who had no drugs and just $40 cash. They pointed firearms at the couple, threatening them with death, beatings and their dog being shot.

Other innocent bystanders can get caught up in these events, such as family members getting beaten up on the way to find the target.

Then there is the impact on the health system for the treatment and ongoing costs of serious injuries.

Often, Ray says, acts of taxing are little more than crude robberies, but the tactics range from simple threats to extreme violence.

Guns are not the only weapon of choice. There are stabbings, knees being broken with a baseball bat, car jackings and, in one horrific case, a blow torch was used to torture a victim.

“Humanity goes out the door when it’s business,” Ray observes.

And if that business is to do with drugs, then invariably gangs will be involved.

Ray says many other people involved in the manufacture and trade of illegal drugs will have someone who acts as their “umbrella” – someone who is paid to protect them from potential gang taxers. “Invariably those ‘umbrellas’ are also gang members.”

For groups that like to convey the image that they exist outside the confines of social norms and the law, many gangs maintain a surprisingly conservative operational structure, almost identical to mainstream businesses.

Maybe it shouldn’t be a surprise that the Head Hunters, for example, became a legally incorporated society in 1996.

A strict hierarchy appears to be fundamental to gang life, with a president, a vice-president, a treasurer, a secretary and the “sergeant at arms”.

Below this “management” tier are the “patched” members who are allowed to carry out business with the backing of the gang’s name or “branding”.

Below them are the prospects or nominees, who follow instructions from the patched members to show their loyalty and worth. Ray says this can range from serving drinks and cleaning the club rooms to taking the rap for someone else’s crimes.

Below them are the gang “associates”, who affiliate to the gang but have not taken the step of seeking to become a prospect.

Despite being made up of apparently like-minded people, gangs are not run along cooperative lines. They most resemble old-style monarchies, with unwavering fealty demanded of their members who are expected to put the gang and its activities above all else in their lives, including family.

Again, somewhat ironically for those who fancy they like to run outside the mainstream, gangs are subject to a host of strict rules and regulations, not least about what they are allowed to wear.

The power of the gang brand is immense. “When violent acts are carried out while wearing gang regalia, the wearer is no longer a single individual,” Ray says.

“If I tried to tax someone, they wouldn’t take much notice of me, but if I was wearing, for example, a Head Hunters’ patch, I’m representing 500 members. A victim would consider that retribution might come from any one of those 500.”

Emblematic signals mean everything to a gang. Nuances associated with the wearing of gang symbols and colours that would be lost on most people can spark significant tensions among group rankings and between gangs.

It’s within this highly regulated fiefdom of ritualism and lawlessness that the violence and intimidation of taxing occur with few if any consequences available through the criminal justice system.

Some may not consider it a big problem, but from the police perspective, Ray says, it remains a concern.

“Yes, the victims may be gang members, but they are also, invariably, fathers, brothers and sons, so we have sympathy for them and their families when they get hurt.” 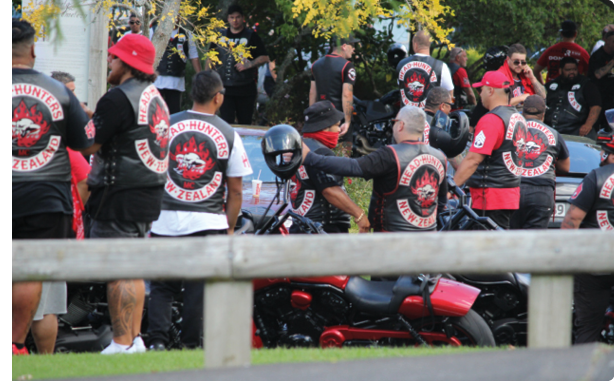