Stuff’s language includes phrases such as:  “feverishly embraces conspiracy theories”, “demand he be fired or censored” and “a personality trait could explain his actions”.

These are amongst dozens of other ad hominem and sweeping statements using disparaging language and ridicule.

The reason? The scientist does not conform to dominant social norms with respect to the Covid response.

This is a dismal low for our media. Our society strives for a social norm that rejects bullying – and that includes rejecting language that is cruel and insulting. New Zealand news media’s self-imposed standards  include “accuracy, fairness, and balance.” Despite their principles, NZ’s media were quoted as being part of a “sustained propaganda campaign” by the Prime Minister. It is clear these two outcomes are mutually exclusive.

The article may be explained by the work of Dr. Maja Graso, who said:

“Public shaming of scientists and experts is more acceptable to people when it goes against the prevailing opinion”.

Dr. Maja Graso, a senior lecturer at the University of Otago, recently published a paper suggesting there is a bias against studies that evaluate the social costs of strict Covid measures. That evaluation is one of the topics discussed by Dr. Thornley and as such, he is a living testament to Dr. Graso’s study results.

The Stuff article was music to the ears of those who cherish the dominant narrative. As if they had just read a social psychology textbook, one elected representative stated on social media “very thoughtful editorial”.

Dr. Graso goes on to explain that,

“People are more accepting of the human cost that emerges from strict (Covid) responses – people do not want to question that”.

The technical term is “asymmetrical tolerance”. In lay terms, it means “bias” and arises when something has become a sacred value of society that is beyond questioning and beyond reproach. Social psychology terms that “moralisation”. Dr. Graso’s study results suggest the Covid response has indeed become moralised.

Scientific America also reports on shutting down dissenting voices in “The Covid Science Wars – Shutting down scientific debate is hurting the public health”.

It reads “…attacks have caused serious reputational harm in some cases and led at least a few scientists to self-censor and avoid publishing data that could inform efforts to dampen death rates from both the virus and its remedies.”

This differs from my own view that the chicken came before the egg. I believe the media has facilitated a singularly accepted, locked-in narrative. This may have been avoided right from the start if we had investigative reporting and open dialogue about alternative views.

The bias we see has the effect of stifling both free speech and free thought. George Orwell said, “you just have instilled into you the understanding that there are certain things it wouldn’t do to say — and you don’t even think about it anymore. You just don’t talk about it.”

Our fifth estate (non-mainstream media and social media) is taking on the role of giving a voice to independent journalists and bloggers, independent websites and groups such as Voices for Freedom, Covid Plan B, and other outspoken associations and individuals.

In addition to Dr. Thornley, other courageous and outspoken individuals are able to share their message through the fifth estate media channels. They include lawyer Sue Grey, who continually challenges the legality and morals of the status quo, Dr. Sam Bailey, who creates youtube content with answers to questions unavailable elsewhere, Voices for Freedom, lawyers who consistently challenge the government’s propaganda, Dr. Alison Goodwin and the 40 NZ doctors who signed an open letter of concern regarding the mRNA vaccine and many more.

Predictably, these groups are all subject to ridicule yet persevere at great personal cost. It’s ironic to me that those who follow the easier road – the widely accepted narrative – receive awards such as New Zealander of the year. The difficult road is when we violate social norms and endure the social punishments that entails to speak out about different viewpoints. That’s because, as Dr. Graso says, once an idea becomes moralised it is almost impossible to shift.

One way forward, she says, is to ensure open discourse, that we do not invalidate other people’s fears or concerns and that we engage and recognise concerns – on both sides.

Clearly, our fourth estate does not endorse this or endorse following its own code of conduct. If we had genuine independent investigative reporting in the mainstream media, there may be less dependence on the fifth estate that so many complain about. A direction from the Prime Minister that the government is the “single source of truth” doesn’t promote open discussion of different views either.

To move forward, New Zealanders must decide whether or not the harrowing of dissenting scientists is what we stand for or whether we learn to approach our conundrum of differences in a more pink-shirty kind of way. I believe we can achieve the latter. 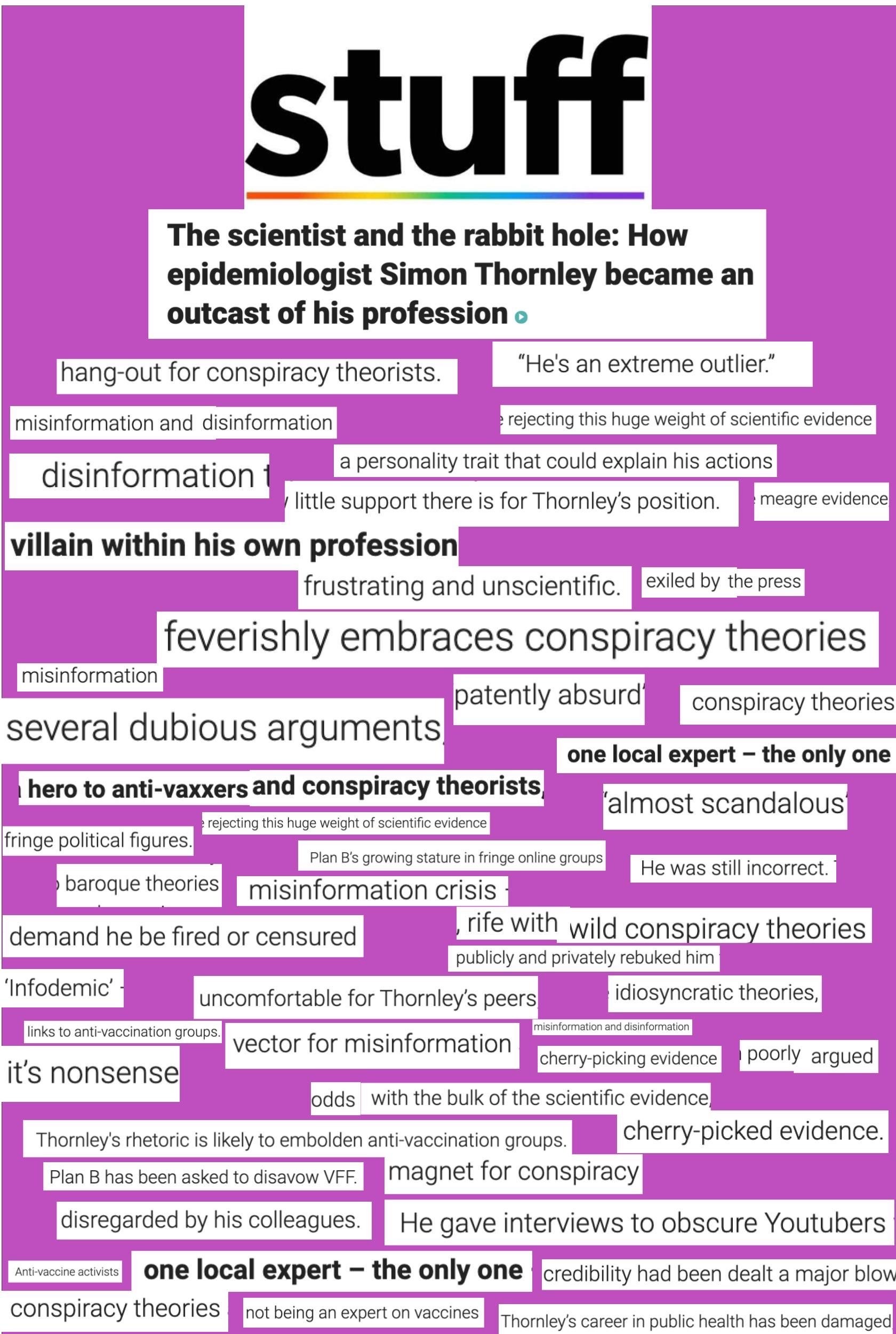