As I said I would yesterday, I will now give further comment on the interview given by the ex-USA Ambassador to Myanmar under the auspices of the Harvard Ash Centre.

He said that the USA can’t do much on their own but can help Asian countries, Japan and India develop an International response.

Japan in particular has individuals who have good relations with the Military, and they should be used to influence and inform the Military. Explain to the Military, starting with the Senior General Min Hlaing that it will not go well, he will not get the support he needs. By using these “back channels” they can explain that he won’t get the money he wants or the power he wants. Sovereign independence will be affected, Myanmar will not have a balanced foreign policy and they will have to rely on countries that they don’t want to rely on. To help them find a way out they will need to talk to the previously mentioned nations.

He feels that the regime does not want to become a client of China, and that the slow move to democracy in 2014/15 was because the Military wanted to get closer to the USA and insulate a little from Chinese meddling. Given that the Chinese have referred to the coup as a cabinet reshuffle and appearing in favour of the coup, does this signal a pivot in the relationship between the Military and China?

He stated that the Military has a bad view of China as previous generations of the Military had been regularly fighting communist backed insurgencies, supported by China. These Ethnic Armed Groups (EAOs) caused the death of Myanmar soldiers, and may have been assisted by Chinese mercenaries, using Chinese weapons. Indeed, Mitchell stated that even today Chinese weapons are getting into the hands of the EAOs. The Military wonder if the Chinese are playing a double game and using their covert support for EAOs as leverage to up pressure on the Military leaders of Myanmar to achieve what they want or reduce the help to EAOs to reward the Military.

The Military also resents the Chinese and this goes back centuries as the country repelled continuing incursions from China. They resent the amount of investment and taking of resources. They resent China not caring about the local people or the environmental and social impacts. In short, the Chinese don’t care about Myanmar people or the country, and the Military knows it.

The Military wanted a balance between the West and China. When Daw Aung San Suu Kyi won the election, nothing changed until the Rohingya crisis when the West’s relationship with Myanmar changed and the NLD government started to lean more towards China. In the last two years, the West started to build bridges and worked on getting closer to the NLD.

China is not concerned about Myanmar but wants Myanmar’s help to achieve its aims.

These were interesting views expressed by Mitchell and are similar to conversations I had with his Deputy Head of Mission at the time.

The USA concern is for civil society changes to be implemented, democracy maintained and improved and China to stop its encroachment throughout the region.

India wants to stop China getting closer to the Indian Ocean and to stop aiding rebels in the North of Myanmar which impinge on India’s North-Eastern states.

It is missing out on an opportunity to input into policy and via the implementation of opposition to the coup an opportunity for International virtue signalling from Jacinda Ardern.

If New Zealand is afraid of China or too desperate for trade with China, then its International standing will take a hit. The USA is working hard to create a consensus with other nations and New Zealand is in danger of giving its allies cause for concern about its commitment to mutual support.

Without denigrating the protestors, Mitchell said that the easy part is protesting, the hard part is the solution. This is where the need for a coalition, with New Zealand included, is apparent.

And tongue in cheek, just to show how easy it is to protest, here is today’s view of Hledan Junction, Yangon, just down the road from the USA embassy. 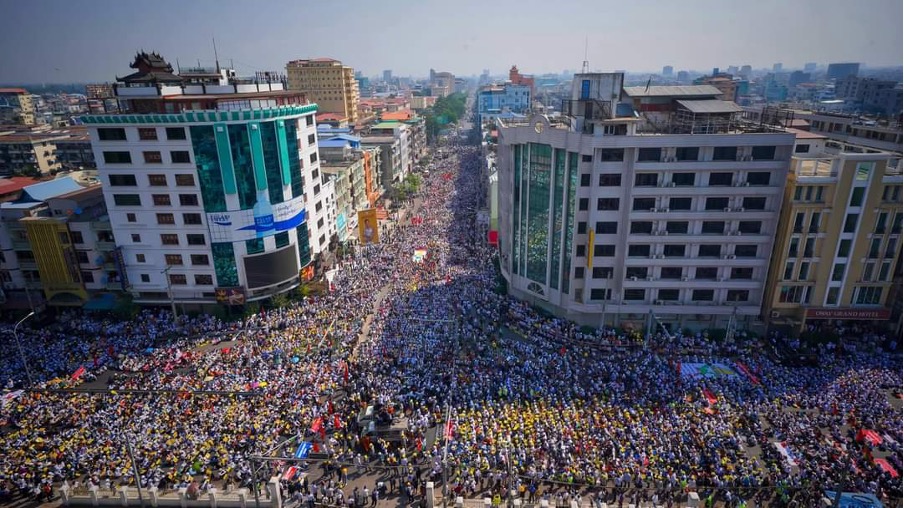