Skip to content
Scott Morrison is siding with the censorious left. The BFD. Photoshop by Lushington Brady.

It’s a tough enough battle defending free speech against the censorious left. It’s even worse when gutless so-called “conservatives” take their side.

“The best lack all conviction, while the worst are full of passionate intensity,” indeed.

In March 2019, in a letter to the Chair of the G-20 Summit in Osaka, Japanese Prime Minister Shinzo Abe, Mr. Morrison argued that social media managers should face jail unless they co-operated with stopping their platforms being used to spread “right-wing extremism”.

Perhaps if Scott Morrison cared to step out of the Canberra bubble, he might take note of the tidal wave of left-wing extremism that is spewing out of social media? Including fact-free leftist conspiracy theories falsely framing him and his government as the puppets of a sinister Pentecostal Christian plot?

But no: “Scotty from Marketing” is once again following his worst instincts and trying to “keep ahead of the message”, as they say in ad circles.

Morrison is also demonstrating his utter cluelessness about how the internet works.

In a March 2019 interview on the Seven Network program, the Prime Minister also stated:

Cue much eye-rolling from people who actually know what they’re talking about.

Toby Walsh is professor of artificial intelligence at the University of NSW. He explains that the comparison is inappropriate because advertising is quite imprecise. ‘Filtering social media is something that you want to do with much great accuracy’, Professor Walsh said.

Professor Jean Burgess is director of the QUT’s Digital Media Research Centre. She says algorithms “have pretty big limitations”, and noted that “tacking hate speech also comes with … complexities that machine learning is not yet particularly good at dealing with”.

Which you would already know about, if you’ve ever been Zucked for, say, posting an historical photo as an editorial comment on the dangers of authoritarianism; or copped a YouTube strike for warning about Big Tech censorship.

Morrison is falling over himself to impose the most draconian censorship regime imaginable.

The Australian Federal Government has introduced a new bill that would give them the power to financially ruin anyone for posting content online that’s deemed “offensive.”

The Online Safety Bill will make it illegal to post “seriously harmful content” to the internet, including comments or social media posts that “menace, harass or offend” other people.

Which is such a broad brush that it means that no one will be able to say anything on the internet without sweating that the jackboots will be kicking their door in.

Yet, the same government that blithers about “safety” is simultaneously prepared to make doxxing – an odious practice that has led to violence and even deaths – an official government policy.

The government’s eSafety Commissioner would also be granted the powers to force social media companies to remove content and disclose the private and personal details of offenders who may not be otherwise identifiable.

Naturally, Labor and the Greens are beside themselves that they’ve got a “Liberal” party prime minister after their own heart. Within his own party, supposed “liberals” like Tim Wilson, who once described himself as a “freedom commissioner”, are conspicuously silent.

What hope is there left for free speech? None, it would seem.

Now, shut up, before you offend me. 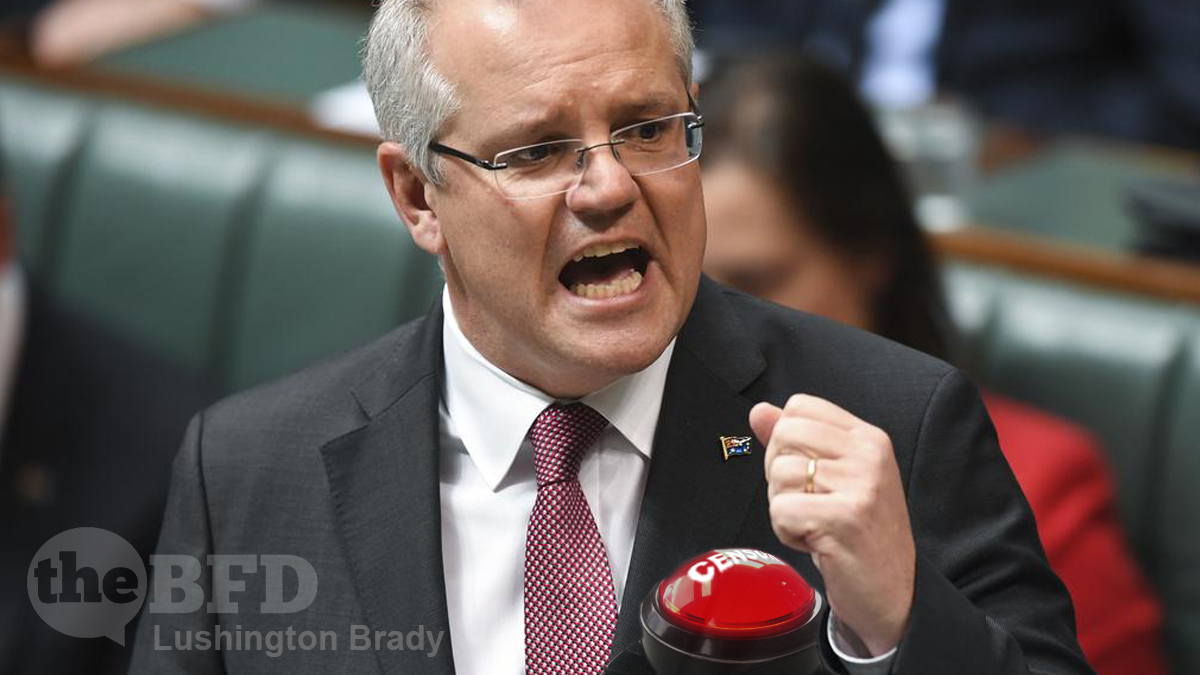