Skip to content
2062: The last surviving members of the mainstream media beg President Trump to run for an historic 12th term. The BFD. Photoshop by Lushington Brady.

The Democrats’ second impeachment attempt on President Trump, in the last days of his term, might seem like mere political spite, but there is a method to Pelosi’s malice. RINO swamp monster Mitch McConnell knows it, too, which is why he’s hissing about voting with the Democrats in the Senate.

What the alligators and snakes in the Washington swamp are really afraid of is Trump 2024.

Ousted presidents traditionally retire to make fortunes from grifting third-world nations and spying on the incoming administration. But Trump is very far from a ‘traditional’ president. In fact, that’s one of the main reasons many voted for him – and would do so again.

David Paleologus is a top pollster, and the director of the political research center at Suffolk University. He says the Trump brand is far from finished.

“Writing Trump off prematurely is not supported by the current data,” he tells me. “Regarding our last national poll, 30% of registered voters said that they would vote for Donald Trump in 2024, and an additional 13% said ‘maybe.’ Among Republicans 71% said yes and 16% said maybe. This is clearly enough to easily win an open Republican primary.”

That’s what the RINO establishment is terrified of, every bit as much as the Democrats.

Media consultant Cosmo Macero, Boston-based partner at public affairs firm Seven Letter, says[…]Trump’s brand is “very badly damaged” among many conservative audiences by the events of the past few weeks[…]

“But with all that said,” adds Macero, “there are tens of millions of Americans who will probably never be moved off their support and admiration for Trump[…]”

The mistake, there, is to confuse sniffy, pearl-clutching, ‘polite’ conservatives with the great mass of ‘deplorables’ who flock to Trump rallies.

But don’t rule out a new high-profile media venture. “I don’t know what you do if you’re him, if you’ve been ‘president of the free world’ and you’ve been impeached twice,’” jokes media executive Scott Dunlop, “but then if you’re Donald Trump you’d say, ‘I could work that.’”

Nor want them. Trump’s incessant tweeting horrified maiden-aunt conservatives, but it was one of his most potent weapons in his presidency. Trump knew he was never going to get a fair deal off the mainstream media, so he simply went around them, direct to the people – and the media ended up hanging on to every word.

The simple fact is that the media needed Trump more than he needed them. The mainstream media have only survived by peddling a steady output of Orange Man Bad. With Trump gone, they’re screwed.

Big Tech faces much the same future: since banning Trump, both Twitter and Facebook have suffered massive stock losses. Gab is exploding; so was Parler before Big Tech ganged up to crush it. Many are hoping that Trump, with vast capital at his disposal, will turn his attention to building a new media platform.

“He can probably raise enough capital to launch his own network.” Trump got 75 million votes at the last election, and had 80 million Twitter followers before he was booted off the channel, Dunlop points out. That’s a big potential audience. “He can go to his core.”

There has been talk he could partner with conservative channels such as NewsMax and One America News Network, which he has praised and which have been largely loyal to him even since the election.

The most delicious irony would be to see the mainstream media go crawling to Trump, as they watch their ratings collapse without the Bad Orange Man to prop them up. Only to see Trump give them the finger and start his own new media empire.

And then use that as a platform to build up a tilt back at the White House in 2024.

Trump will be 78 in 2024: the same age as Joe Biden is now. Bernie Sanders is 79. Trump shows off an energy level that “Sleepy Joe” probably hasn’t had since he faced off against Corn Pop back in 19-dickety-2.

One thing is certain: Donald Trump is far from finished. 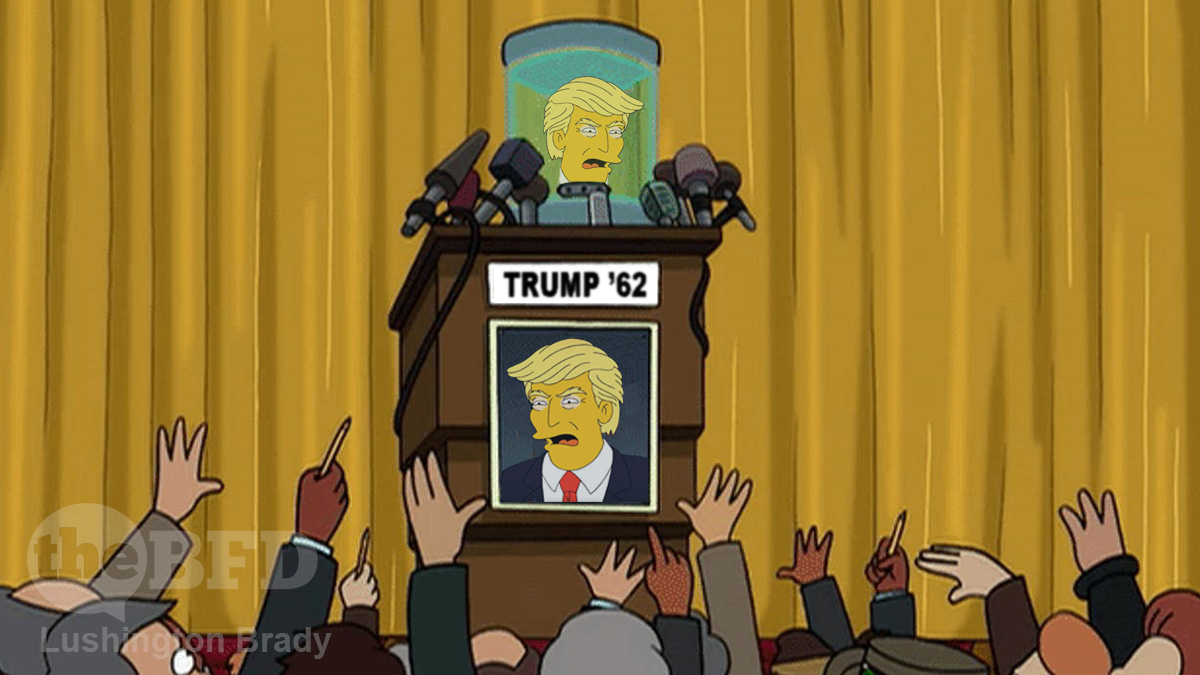