Make no mistake, Kiwis are being softened up for another lockdown. As the rest of the world suffers resurgence of the CCP Virus, including new strains of the virus, here in New Zealand we are now so far behind the rest of the world in dealing with the Chinese plague that the economic effects of maintaining our semi-secure border will begin to be felt.

Meanwhile, every single day we are told of new “cases” in MIQ, which can only have got here via an aircraft, but strangely not even one of these “cases”, including the victims of the new super tricky new strain, has required hospitalisation.

Are we being conned?

Of course we are. We’ve been lied to so often that people actually believe the lies.

We were told that we went “hard and early”, when we were weeks behind the rest of the world in shutting down border.

We were told that locking us down was legal, when the truth was it was illegal.

God knows what the Prime Minister has been doing since being re-elected, but it sure as hell hasn’t been working.

One thing that has been pushed harder, and is getting pushed harder is things to condition us into compliance.

We have the bizarre mask mandate for public transport in Auckland.

People catch buses from parts south and don’t wear any masks, but when the bus sails over the Bombay Hills passengers are now ordered to put masks on for the rest of their journey into Auckland.

Apparently, this tricky virus only attacks public transport passengers while they are using the public transport…and despite sitting on the same bus for hours with other perfectly healthy people, they now have to don masks because the bus happens to now be in Auckland.

If we look at the ridiculous mask mandate on ferries it is the same problem. Passengers queue up prior to boarding in close proximity to other passengers, sans mask, but the moment they set foot on the ferry they are told they must mask up. The tricky virus apparently is only risky and especially tricky when actually on the ferry, but not on the wharf waiting.

Same goes for domestic flights. Queue up in the terminals, or Koru Lounges sans mask…no tricky virus lurking behind pot plants there. But step onto the plane and now you must wear masks. The virus is tricky you see. Then the crew serve drinks, and everyone takes their mask off. Clearly the virus is tricky enough to know that it shouldn’t infect people while they’re eating and drinking. And then to cap off the farce of wearing masks on aircraft, the cabin crew walk down the aisle at the end and let everyone paw and grasp the lollies in the basket which then are unwrapped and yes, you guessed it, popped into the now maskless passenger’s mouth.

That is exactly what it is, the thin end of the wedge getting people to comply.

Which is why we are being bombarded with ads on radio and now Stuff running a campaign to get people to use the Government snitching app so they can trace your every movement. With scare stories about how we are letting the team of five million down by not using the app. With suitably stern words from Government ministers that we aren’t complying. And before anyone tells me that the data is only stored on your phone and the government can’t see it then perhaps you should educate yourself, because actually the data is stored with AWS…the same AWS that shut down Parler. The same AWS that is owned and operated by Amazon.

NZ COVID Tracer has been developed for the Ministry of Health by New Zealand company Rush Digital and relies in part on the Amazon Web Services (AWS) platform.

An All-of-Government cloud services agreement with AWS has been in place since 2017. AWS services and infrastructure were reviewed as part of the procurement process and are regularly tested against third-party assurance frameworks.

Any information recorded by NZ COVID Tracer that you choose to share for contact tracing is encrypted before it is sent to the Ministry via the AWS cloud services platform. The Ministry retains control of the decryption keys.

NZ COVID Tracer has also been assessed by independent security experts to ensure your data is managed securely.

Read that carefully, the data is sent to the Ministry FROM AWS. In other words, they have your data.

But here’s the thing…apparently the tricky virus, and presumably the trickier virus mutation, can both be defeated by a QR code. Seriously, that is what Stuff is telling you:

As new highly transmissible Covid-19 strains send countries into second and third lockdowns, Stuff is forging ahead with its “Stop! Scanner time” campaign to remind Kiwis of the importance to keep scanning QR codes, should there be a community outbreak.

Everyone – every single one of us – needs to be scanning the NZ Covid Tracer app, or signing in on a sheet of paper, every single time.

And they’ve been snitching on you:

Stuff watched as 130 New World Metro shoppers walked into the Willis St, Wellington, store on Sunday afternoon. Just 10 of them made use of the scanner app or signed in, in the space of half an hour.

But don’t worry, Stuff has got your back…by drawing a cartoon:

While the kiwi bird is often stereotyped as a bit helpless, Stuff cartoonist Sharon Murdoch has illustrated why we should never judge a book by its cover. The kiwi, realising it has got the code, is fending off the coronavirus with its QR code. Let’s all be good Kiwis together.

Talk about facile. But what can you expect when we have a Prime Minister who infantalises every issue?

Which is why they are now pushing the radio ads hard. You’ve heard them in the car, about how people are stopping summer by not having bluetooth on, or not signing in.

We don’t have the CCP Virus in the general population so why the push?

I’ll tell you why, it’s because you are being conditioned for another lockdown.

It will happen. It is only a matter of time before the tricky virus, or worse, the trickier virus, breaches the border.

So it is just a matter of time before it is back in the community and then the economy will be brought to its knees again with a lockdown.

And how can we tell?

Well, you may notice that your local pharmacist is putting back up the perspex screens. Or your doctor is telling you to renew your prescriptions early. Or you know someone who is under going treatment at the hospital and they’ve been told to get ready for a mid-February lockdown.

Or you’ve got sources inside Ministry of Health who have been working on data models for a community outbreak mid-February.

Or you are wide awake and seeing the evidence or hearing the push ads and realise that we are being softened up. 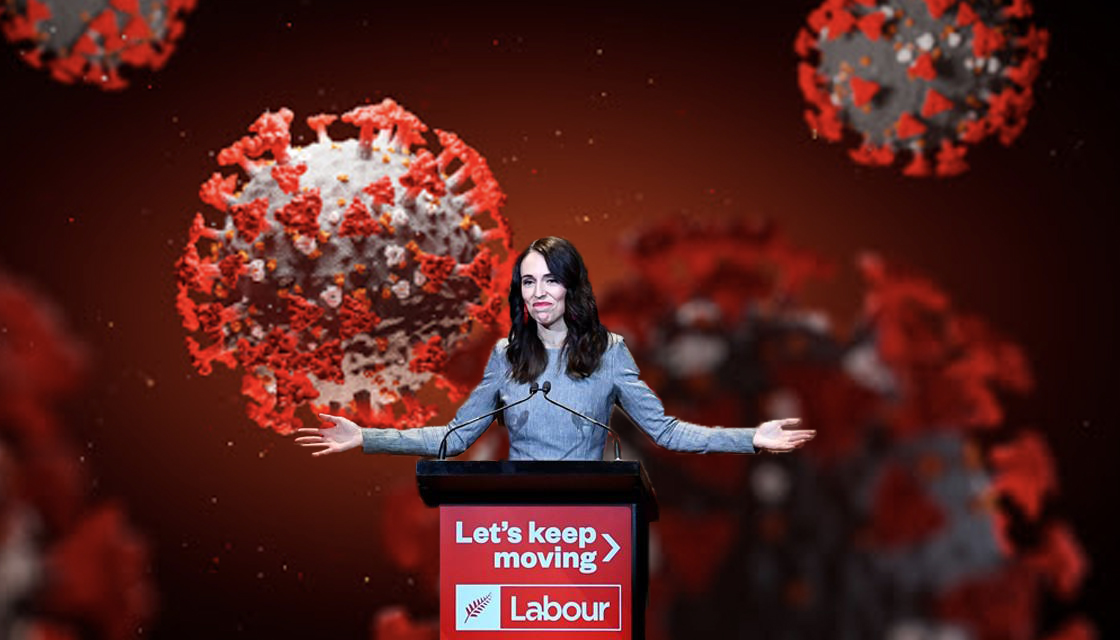