Mad, bad, or dangerous to know? How can we understand the criminal mind and the commission of crimes? Are these prompted by wickedness and the desire for gain or revenge, or by the workings of a disordered mind? Such dilemmas preoccupied late 19th-century psychiatrists and prison doctors, grappling with growing numbers of criminals, many of whom showed signs of “mental weakness” or “lunacy”. And in an era of mass migration, psychiatrists and prison officials also sought to understand why so many of those they confined were Irish migrants.

No work of fiction captures these issues more successfully and evocatively than Margaret Atwood’s novel, Alias Grace, recently adapted by Netflix into a television drama.

Alias Grace is based on the grisly double murder that took place in July 1843 in a village 16 miles out of Toronto, in Upper Canada, when two of Thomas Kinnear’s servants, 20-year-old James McDermott and 16-year-old Grace Marks, were charged with killing Kinnear and his housekeeper and lover, Nancy Montgomery. Kinnear was shot, while Montgomery, who was pregnant, was hit on the head with an axe, and then strangled. The trial caused a sensation and was extensively reported by the press in Canada, the US and Britain. The trial courtroom was said to be so crammed with spectators that there were fears that the floor would collapse.

McDermott and Marks were arrested in New York, where they had fled with a wagon full of stolen goods, and tried for the murder of Kinnear. McDermott was convicted of first-degree murder and Marks as an accessory. Both were sentenced to death and McDermott was hanged. The jury recommended mercy for Marks and her sentence was commuted to life imprisonment. Marks’s role in the crime and her culpability remained and still remains elusive, and neither the novel nor the drama series attempt to provide an answer. In 1872, after a series of clemency petitions, Marks was granted a pardon and released from prison.

Both Marks and McDermott were Protestant Irish migrants, and, while her age may have prompted Marks’ escape from the gallows – she was barely 16 when the case came to trial – her Irishness might well have counted against her. Atwood’s Marks observes the fact that being from Ireland was “made to sound like a crime”. She was, however, portrayed in far a more generous light than McDermott, with contemporary newspaper accounts emphasising her youth and beauty. Yet at the trial she expressed little emotion, and astonishingly arrived in court wearing clothes stolen from Montgomery, raising the question of whether Marks was stupid, unfeeling or disordered in mind.

Marks spent some 29 years in Kingston Penitentiary, but in 1852 was removed to the Provincial Lunatic Asylum, where she remained for 15 months. In the series, the asylum is portrayed in negative and stereotypical ways but in reality her circumstances and conditions would have been improved. Psychiatrists in this period were captivated by the relationship between crime and mental disorder, and particularly so in the case of women. The interest of fictional psychiatrist, Dr Simon Jordon, who attempts to discover a true account of the crime forms the core of Atwood’s novel.

Women committing crimes in the Victorian period – particularly violent ones – were depicted as doubly deviant. They were castigated and punished for their criminality, and also fiercely criticised for deviating from the prescriptive ideology of femininity, and betraying the ideals of womanhood, marked by respectability, passivity and virtuous behaviour.

Throughout this period, many such women would find themselves in asylums and saved from the death penalty, their crimes explained by insanity. Women were described by the emerging profession of psychiatry as being particularly vulnerable to mental weakness and illness, with female Irish migrants especially susceptible to imprisonment and asylum committal. Many had endured tough lives and migration was prompted by poverty and the need to build a new life in a new world. Grace Marks had made the journey to Canada from the North of Ireland about three years before the murder was committed. However, in the novel, Marks’ mother dies in childbirth during a harrowing voyage to Canada while her father is at best neglectful, at worst a violent drunk.

Far smaller numbers of women than men were admitted to prisons. Once there, though, they were seen as liable to be disruptive and volatile – traits the Victorians also associated with Irish migrants.

Alias Grace was inspired by Atwood’s reading of Susanna Moodie’s 1853 account of pioneer life, Life in the Clearings Versus the Bush; two chapters are devoted to Moodie’s visits to the penitentiary and the asylum to see the “celebrated murderess” Marks, whose “fearful hauntings of her brain have terminated in madness”. She was “lighted up with the fire of insanity, and glowing with a hideous and fiend-like merriment”.

Marks was one of many who travelled to Canada from the north-east of Ireland prior to the Great Famine. Atwood’s novel evocatively describes the extreme hardships of the voyage, and the speed of Marks’ ejection from the family into domestic service. Given the shortage of servants in Canada at this time, Marks was able to move from position to position with ease.

Many Irish migrants ended up in prison as well as asylums. High rates of mental illness and institutional confinement were observed in Irish who travelled to new lands; almost 3,000 Irish immigrants found themselves in lunatic asylums in Victorian Ontario. Atwood is alert to the prejudices Irish migrants may have encountered in Canada, while Moodie’s depictions of the Irish in Ontario’s asylum and the penitentiary, and in general terms, are overwhelmingly negative.

Migration was described by Victorian doctors as dislocating, and liable to result in mental stress and breakdown. So the expectation that Marks might have been suffering from mental illness, or was, as some claimed, simple-minded might well have been shaped by the association between Irishness, criminality and madness. Given her experiences, she was in many ways an ideal candidate for mental breakdown.

The question remains unanswered – in the real case of Marks and her dramatisation – as to whether she was cunning enough to get away with murder and to shift the blame onto her accomplice, a vulnerable victim of a domineering McDermott, or mad. 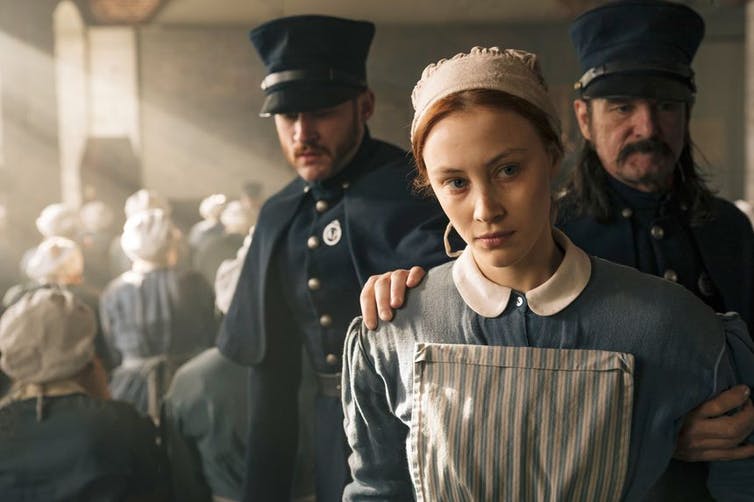