There was one black fly sitting on the wall. No, this isn’t the penultimate verse of a lengthy song beginning ‘There were a thousand black flies sitting on the wall’, but a statement of fact. The wall in question was in the office of Grunt Robbingson, Minister of Sausage Rolls, Financial Destruction and Money Printing, and the fly mentioned was no ordinary fly, but my very own Spyfly device, which was already recording the activity in the room. My intelligence sources on the cleaning staff had informed me that Justinda Ardeau, the Queen of Covid was on her way to one of her regular informal chats with the Minister.

A sharp rap on the door, followed by a clarion call of “Catering”, caused a smile to briefly flicker across Grunt’s saturnine features as the door opened and a large tea trolley with a Cheops-like pyramid of sausage rolls rolled into the office propelled by a perspiring minion.

As Grunt shovelled a dozen or so rolls onto his plate, the sound of approaching teeth was heard and the door opened to reveal none other than St Justinda the Virtuous in person. She beamed at Grunt like a high wattage searchlight, and sat down in a chair by his desk.

“Isn’t life wonderful!” she exclaimed, “two months of holidays coming up and not a care in the world.”

“Haven’t you got an emergency to attend to?” enquired Grunt. “The climate emergency. Shouldn’t we all be working on that instead of going on holiday? Emergency suggests that immediate action is necessary. If it had been an earthquake emergency, for example, would we all be going on two months’ holiday?”

“Well, I would be,” said Justinda firmly. “I’d find some mug of a minister to cancel their holiday. We do have plenty of ministerial mugs as you know.” She paused as a thought embarked on, and completed, the short journey across her mind.  “But there would be hugs in an earthquake, so it could be worth it. Just imagine me on TV worldwide, hugging mangled survivors as they’re hauled out of the rubble. But Grunt, we all know this isn’t a real emergency, but just something the UN told us to do.”

“You’re not a little worried about Trevor Dullard’s situation?” asked Grunt. “This could be a bit embarrassing for us in the New Year, couldn’t it?”

Justinda looked a little sad. “I can’t allow him to resign,” she stated emphatically. “He’s my protector for when those nasty people in parliament ask questions that upset me. I need him for when the Flusher is mean to me. That Seemore fellow is very cruel to me too, so I need my little lambkins Trevvie there. No, when we get back from holiday everyone will have forgotten about it. Trust me Grunt.”

Grunt looked rather sceptical, but avoided answering by pushing a foot-long sausage roll into his more than adequate maw.

“I’m thinking of declaring a Child Poverdy emergency,” said Justinda a few seconds later when Grunt’s dainty morsel had disappeared completely. “It will get me a lot of publicity, and I can get lots of photos at kindergartens hugging poor children.”

“But that would mean you have to actually solve the problem, wouldn’t it?” remarked Grunt

“Of course not,” sneered Justinda, “child poverdy reduction is simply an aspiration. Anyway, I’m hoping that the new abortion laws will take care of the problem. Kill ’em before they become a poverdy statistic, and I can say I’ve succeeded. I could get away with that, couldn’t I? My bestie Covid O’Lyin’ would spin me into a heroic demigoddess and I’d be in all the magazines again. I’d win the next election again in a bigger landslide, and I’ll be PM of my Dominion as long as I like.” She gave Grunt one of her stomach-turning winks. “Dominion — get it Grunt?”

Grunt gave a sheepish simper and grabbed another twelve incher. He looked around the room furtively. “Shhh Justinda,” he said. “Not so loud. Even the walls have ears around here. Maybe that fly up there is listening.” They both churckled* somewhat unconvincingly, like a pair of Amazonian Churckling Tapirs.

“Well, I’d better be going,” said Justinda, rocketing to her feet. “Auntie Hellish Quark has an Xmas party starting soon, and I don’t want to miss out on the gummy bears with icing sugar.” She winked again, causing Grunt to blanch and grab another sausage roll.

“I’m going to abolish Xmas,” said Justinda. “Some people use it as an excuse to bring religion into the day. That has to stop. Did you know that on 25th December 1651, the Massachusetts General Court ordered a five shilling fine for observing any such day as Chr – I mean Xmas? I think I’ll do the same, but of course the fine will be much higher.” She screwed up her face as though in thought. “On 25th December 875, Charles the Bald was crowned Emperor of Rome. I think we’ll rename it ‘Charles the Baldmas.’ We could replace Santa Claus with a bald clown or something.”

“Well, there are plenty of those in the Party,” observed Grunt sardonically.

She moved towards the door. “People don’t realise how tough it is at the top, Grunt. I have huge decisions like this to make all the time. What Western traditions can I abolish without the flock of five million noticing — it’s not easy Grunt. Some of them notice and can be really annoying.”

“Merry Charles the Baldmas,” said Grunt, with a trace of a mocking tone in his voice.

“Just Merry Baldmas will do, thanks Grunt,” said Justinda. “And Merry Baldmas to you.” With that she left the room, leaving Grunt chewing on a super deluxe eighteen inch roll.

Your intrepid eyewitness packed up his gear and headed for home, taking great care to wish everyone he met a hearty Merry Christmas.

*originally a typo but I decided to let it stand as a gurgling chuckle.

Merry Christmas to all BFD readers.

If you enjoyed this BFD satirical article please share it. 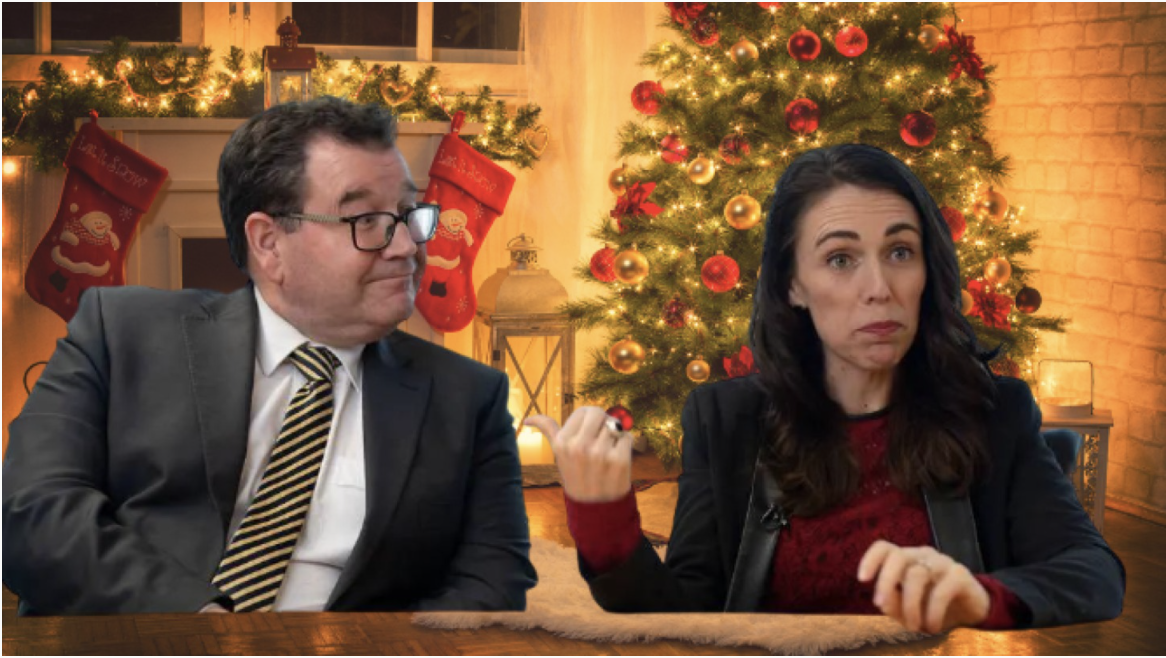