The Government’s state of emergency has created a dangerous political vacuum. Decisions that profoundly affect everyone’s lives are being undertaken in an autocratic fashion without any attempt at democratic involvement.

Even the typically reserved Law Society has raised concerns about the lack of transparency and consultation associated with the lockdown:

“As far as possible, there should be an ongoing attempt to replicate the normal policy and law-making process… People affected should be consulted where feasible. Decisions that affect peoples’ rights should be reviewable in some way.”

As a consequence of the democratic vacuum created by the suspension of our civil liberties and Parliament, New Zealanders have little awareness of the profound implications of the political decision made by our Prime Minister to eliminate COVID-19 from New Zealand.

By attempting to eliminate the virus, New Zealanders will never gain natural immunity to the disease. That means until a vaccine is available, it will not be safe for New Zealanders to travel overseas. And while everyone is very bullish about the prospect of a vaccine being produced before the end of 2021, COVID-19 appears to be a fast mutating virus, with many strains now emerging, which make vaccine development more difficult.

Nor will it be possible to re-open our borders without some form of heavily-regulated quarantine process, since any viral outbreaks could force the country back into a lockdown.

As a result, the international tourism sector, which employed more than 300,000 people, catered for around 4 million overseas visitors, and accounted for 10 percent of our economy, will be decimated.

Instead of trying to eliminate the virus, other countries are managing the outbreak. They are using strategies similar to that outlined in the Ministry of Health’s Influenza Pandemic Plan, which involves protecting those who are vulnerable and progressively imposing restrictions to ensure the disease does not overwhelm the health system. The aim is to enable the economy to continue operating, allowing natural immunity to be built up in the population as a whole so that restrictions – including those at the border – can safely be lifted.

New Zealand enacted a similar strategy in January, in response to warnings from the World Health Organisation about the rapid spread of the virus. But the Prime Minister made a unilateral decision to change from managing the virus to eliminating it in mid-March. Exaggerated computer models predicting tens of thousands of deaths, were used to spread the fear and alarm needed to justify a total lockdown of the country – even though such extreme restrictions were not necessary.

Former Reserve Bank economist Ian Harrison found the models used by the Prime Minister “grossly overstated the number of deaths… The decision to lockdown all ‘non-essential’ workplaces was an overaction that was not supported by evidence.”

Pharmaceutical scientist and former New Zealander of the Year Sir Ray Avery also warned of the danger of basing major policy decisions on inaccurate statistical models – and of the folly of trying to eliminate a flu-type virus: “In the history of all humankind, we have only ever eliminated one major infectious disease; smallpox”.

He believes that attempting to eliminate COVID-19 is impossible and, as a result of the Government’s flawed approach, “this virus will have caused more economic damage, loss of livelihoods, increased suicides, disruption to our education system, inhuman treatment of our elderly and irreversible social changes than actual deaths…”

With major questions arising over Jacinda Ardern’s judgement in adopting the elimination strategy and imposing one of the strictest lockdowns in the world, the lack of scrutiny of her decision-making is disturbing.

Treasury has quantified the devastating cost to the economy of the PM’s extremist approach. As a result of four weeks of lockdown, unemployment is expected to rise from 4 percent to 13.5 percent – increasing the number of unemployed from 111,000 to 371,000. It’s anticipated that a further $20 billion in Government support will be needed to cushion the blow – in addition to the $25 billion already spent fighting the virus.

According to the OECD, the Prime Minister’s lockdown will result in New Zealand suffering one of the biggest declines in economic activity in the world – almost 30 percent.

In comparison, Australia’s decline will be lower at around 22 percent, as a result of Prime Minister Scott Morrison adopting the best practice approach of managing the outbreak while preserving the fundamental integrity of their economic system.

The only industry sector that has really been restricted is hospitality, where pubs, casinos and clubs have been closed, with restaurants and cafes only able to operate takeaways.

Despite their more liberal approach, the results in terms of COVID-19 case numbers per head of population and the number of deaths, is about the same in New Zealand and Australia.

While New Zealand faces a greater financial burden as a result of the PM’s lockdown, the cost is far more than economic.

A new report released by Auckland University’s Centre for Informed Futures and co-authored by former Chief Science Advisor Sir Peter Gluckman outlines the social impact of the lockdown: “Family violence, depression, anxiety and other issues can be expected to rise as people face loss of income, unemployment and simply being in close proximity with others.”

They predict the country’s already high rates of depression and anxiety among young people will increase, along with the suicide rate, and they believe that up to 10 per cent of people affected by income loss, unemployment or ill health during the outbreak are likely to experience post-traumatic stress disorder.

But there’s another consequence of the lockdown that’s worrying health professionals – and that’s the fallout from the disruption of medical services and the cancellation of elective surgery.

Under Government orders, hospital wards were cleared, surgeries left idle, and Emergency Departments emptied ready for the influx of patients predicted by the Prime Minister’s exaggerated computer models – which proved to be as inaccurate as they were terrifying.

While an estimated 30,000 New Zealanders who need surgery have been suffering at home, hospitals have been running at around 50 percent capacity for over a month.

Medical specialists are increasingly concerned the lockdown is costing lives through people failing to seek the treatment they need. A massive drop in pathology testing means serious diseases are going undetected. Patients whose operations were cancelled, risk more serious complications.

And as a result of the Prime Minister’s relentless message that the only way to keep safe is to stay at home, many people who are feeling ill now think they’re not allowed to go to ED because hospitals are only for COVID-19 patients. They also worry that if they did go to hospital, they might catch the virus and die.

International research shows that in Italy, non-coronavirus deaths have been rising at an alarming rate – the total death count was up six-fold from previous years, with coronavirus accounting for barely a quarter of the increase. An analysis from Spain showed that while mortality rates in some regions had almost doubled, only a fraction of the increase was officially attributed to COVID-19.

In 2016 a study reported in The Lancet connected at least 250,000 cancer deaths to the 2009 recession. An investigation of the Ebola epidemic in West Africa found that more people died from the indirect effects of the disease than from the virus itself.

Without a doubt, the fallout from our Government’s response to the epidemic will be considerably worse than the disease itself. Especially if there are new virus outbreaks, since Jacinda Ardern’s elimination strategy is based on the Government’s on-going ability to order more lockdowns.

The Prime Minister has taken New Zealand down the path to State control so far and so quickly, that there’s now a very real risk that the architecture of a socialist state will underpin the rebuild. As a result, freedoms that have previously been taken for granted are now under serious threat.

The signs are already there. Finance Minister Grant Robertson is on record saying: “We must not allow inequality to take hold in our recovery… We need to take this opportunity to tackle those long standing divisions…”

He sees the state providing strong leadership going forward: “The importance of the role of the state has been underlined by this crisis. It is through a well-funded, highly functional public service, that we have had the ability to coordinate and provide leadership for New Zealanders.”

And while there appeared to be a slight glimmer of hope of much-needed reform, when he indicated that the Government intends changing the Resource Management Act to stimulate economic activity, according to this week’s NZCPR Guest Contributor economic commentator and former local body councillor Frank Newman, sensible reform is unlikely to materialise.

Frank explains that while getting rid of the RMA is the only real way to stimulate economic activity and get New Zealand working, the Government will probably exempt itself and leave everyone else to struggle:

“Although liberating businesses from the RMA is the obvious answer, political self-interest is likely to head the government down a different path. Rather than reform the RMA in a way that benefits business, they are more likely to exempt themselves from its restrictions. This is totally consistent with their view that what they do is for public benefit and what the private sector does is for personal gain.”

Going forward, it’s now clear that just as Jacinda Ardern used the Christchurch tragedy to impose her gun control agenda onto New Zealand, so too she will use this virus crisis to impose her socialist world-view onto our nation.

There are already calls for tax rates to be hiked up to 70 cents in the dollar, to force those who are “better-off” to pay for Jacinda Ardern’s lockdown. And it won’t be long before a capital gains tax, estate duties and other tax instruments everyone thought were long dead and buried are resurrected as well.

This is a very dangerous time for New Zealand.

Parliament should never have been closed down during this period of emergency rule. At times like this, when a democratic government starts acting like a dictatorship, the voice of the opposition becomes more important than ever.

National’s leader, Simon Bridges, fell into a political trap when he agreed to chair the Epidemic Response Committee. While there’s no doubt it’s engaging in important work, that role has left the Leader of the Opposition less effective in holding the Government to account.

He should never have agreed to the suspension of Parliament. He should have recognised the inherent dangers of autocratic rule and demanded that the House reconvene at 2 pm each sitting day for a virtual Question Time. That would have allowed for the proper scrutiny of the decisions being taken by the Prime Minister – especially her plan to eliminate the virus.

Dr Peter Collignon, an infectious diseases physician who advises the Australian government, questions whether eliminating the virus is even possible: “The reality is this virus is everywhere, it’s all around the world. So even if you’re successful for a short period of time, how long do you do this for? Six months? Two years? Invariably, you’re going to get the virus re-introduced.”

He points out that Australia is doing better than New Zealand without extremist measures.

There are two clear dangers for New Zealand.

The first is the virus – or more specifically, the Prime Minister’s strategy of eliminating the virus; how many lockdowns can we endure?

And the second is our Prime Minister, who fundamentally believes in state control, and is being given a free rein to embed her agenda deep into the heart of our democracy. 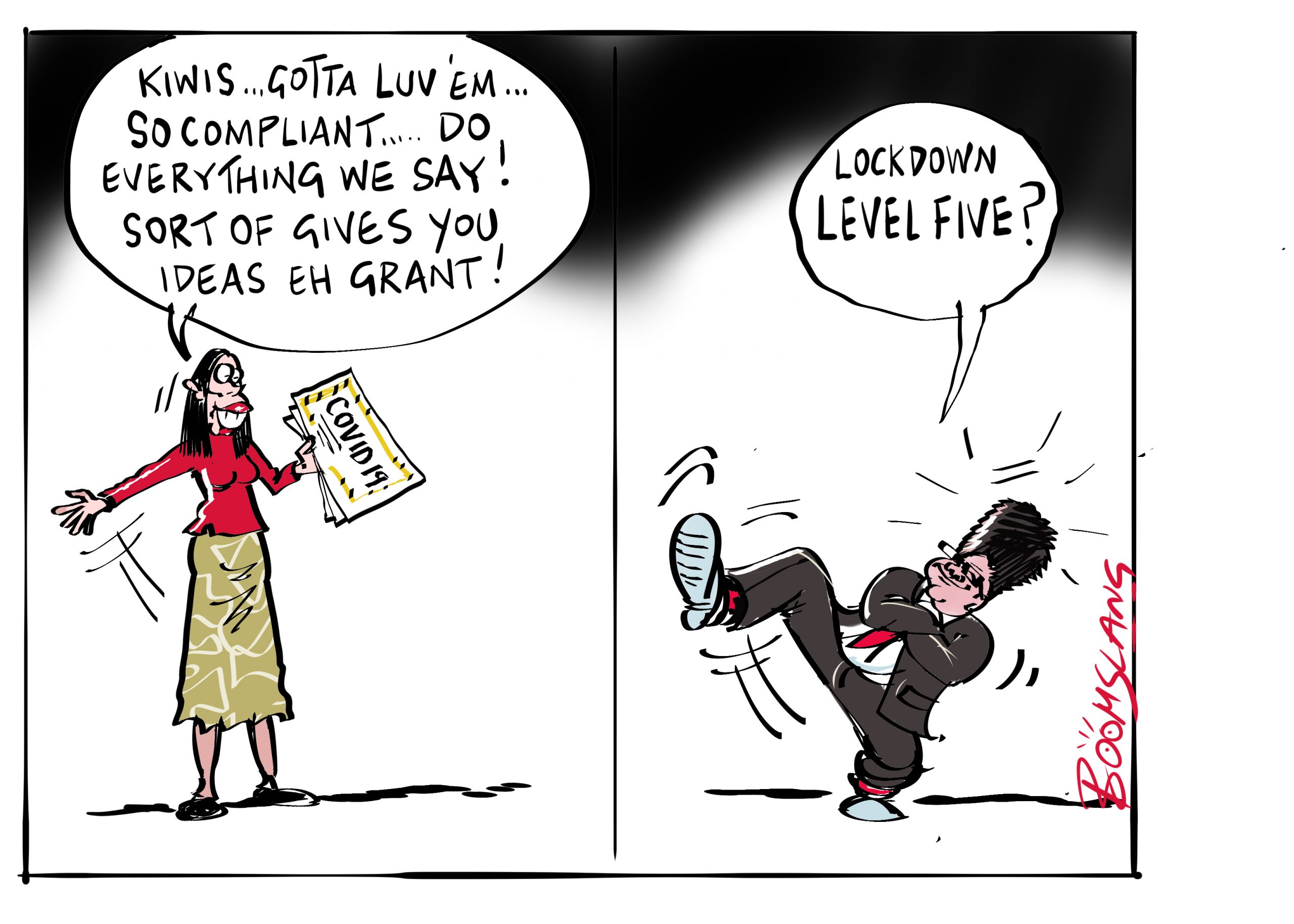