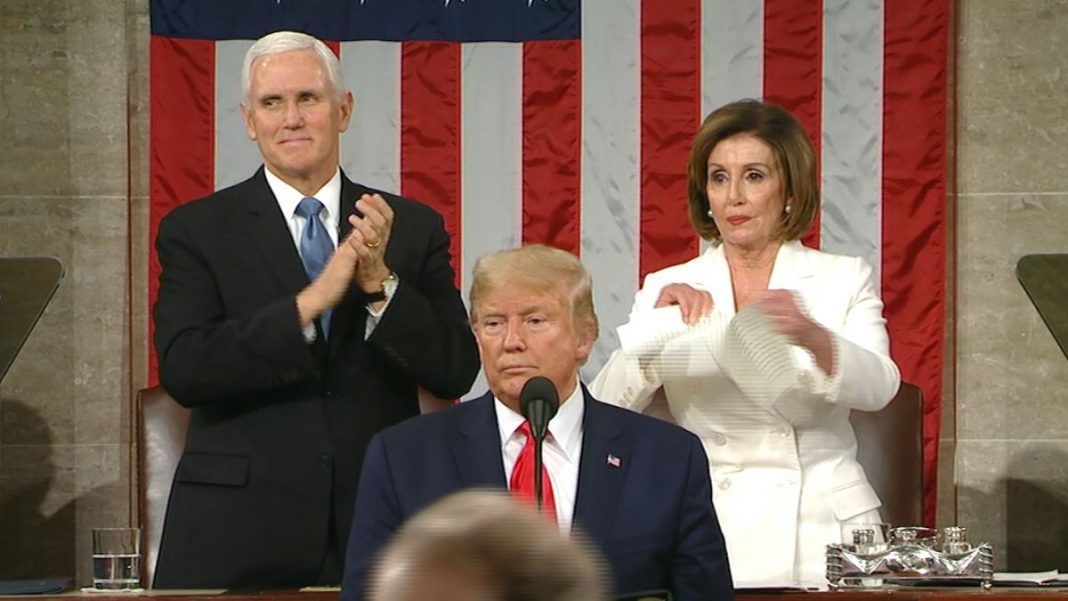 The entire transcript is 6210 words in length so I have abridged it for you, reducing it down to just over one thousand words, highlighting what I feel are the most interesting bits.

Jobs are booming, incomes are soaring, poverty is plummeting, crime is falling, confidence is surging, and our country is thriving and highly respected again.

America’s enemies are on the run, America’s fortunes are on the rise, and America’s future is blazing bright. The years of economic decay are over. The days of our country being used, taken advantage of, and even scorned by other nations are long behind us.

Our economy is the best it has ever been.

Our military is completely rebuilt, with its power being unmatched anywhere in the world — and it is not even close. Our borders are secure. Our families are flourishing. Our values are renewed. Our pride is restored.

Our agenda is relentlessly pro-worker, pro-family, pro-growth, and, most of all, pro-American. We are advancing with unbridled optimism and lifting high our citizens of every race, colour, religion, and creed. Since my election, we have created 7 million new jobs — 5 million more than Government experts projected during the previous administration.

Incredibly, the average unemployment rate under my Administration is lower than any administration in the history of our country.

Under my Administration, 7 million Americans have come off of food stamps, and 10 million people have been lifted off of welfare.

Since my election, the net worth of the bottom half of wage-earners has increased by 47 percent — 3 times faster than the increase for the top 1 percent.

Real median household income is now at the highest level ever recorded. Since my election, United States stock markets have soared 70 percent, adding more than $12 trillion to our Nation’s wealth, transcending anything anyone believed was possible .

Jobs and investment are pouring into 9,000 previously-neglected neighbourhoods thanks to Opportunity Zones.

The United States has become the number one producer of oil and natural gas in the world.

After losing 60,000 factories under the previous two administrations, America has now gained 12,000 new factories under my Administration with thousands upon thousands of plants and factories being planned or built. We have created over half a million new manufacturing jobs. Companies are not leaving; they are coming back.

I keep my promises. Six days ago, I replaced NAFTA and signed the brand new United States-Mexico-Canada Agreement (USMCA) into law.

I also promised our citizens that I would impose tariffs to confront China’s massive theft of American jobs. Our strategy worked. Days ago, we signed the groundbreaking new agreement with China that will defend our workers, protect our intellectual property, bring billions of dollars into our treasury, and open vast new markets for products made and grown right here in the USA.

The United States is leading a 59-nation diplomatic coalition against the socialist dictator of Venezuela, Nicolas Maduro.

Joining us in the gallery is the true and legitimate President of Venezuela, Juan Guaido. Mr. President, please take this message back to your homeland. All Americans are united with the Venezuelan people in their righteous struggle for freedom. Socialism destroys nations.

To safeguard American Liberty, we have invested a record-breaking $2.2 trillion in the United States Military. We have purchased the finest planes, missiles, rockets, ships, and every other form of military equipment — all made in the United States of America. We are also finally getting our allies to help pay their fair share.

We must always remember that our job is to put America first.

132 lawmakers in this room have endorsed legislation to impose a socialist takeover of our healthcare system, wiping out the private health insurance plans of 180 million very happy Americans. To those watching at home tonight, I want you to know: We will never let socialism destroy American healthcare. Over 130 legislators in this chamber have endorsed legislation that would bankrupt our Nation by providing free taxpayer-funded healthcare to millions of illegal aliens, forcing taxpayers to subsidize free care for anyone in the world who unlawfully crosses our borders.

I am asking the Congress to provide an additional $50 million to fund neo-natal research for America’s youngest patients. That is also why I am calling upon the Members of Congress here tonight to pass legislation finally banning the late-term abortion of babies. Whether we are Republican, Democrat, or Independent, surely we must all agree that every human life is a sacred gift from God.

I ask the Congress to pass the Justice for Victims of Sanctuary Cities Act immediately. The United States of America should be a sanctuary for law-abiding Americans — not criminal aliens. In the last 3 years, ICE has arrested over 5,000 wicked human traffickers, and I have signed 9 pieces of legislation to stamp out the menace of human trafficking, domestically and around the globe.

If you come illegally, you will now be promptly removed from our country. Very importantly, we entered into historic cooperation agreements with the governments of Mexico, Honduras, El Salvador, and Guatemala. As a result of our unprecedented efforts, illegal crossings are down 75 percent since May — dropping 8 straight months in a row.

My Administration is also defending religious liberty, and that includes the Constitutional right to pray in public schools. In America, we do not punish prayer. We do not tear down crosses.

We do not ban symbols of faith. We don’t muzzle preachers and pastors. In America, we celebrate faith. We cherish religion. We lift our voices in prayer, and we raise our sights to the Glory of God. Just as we believe in the First Amendment, we also believe in another Constitutional right that is under siege all across our country.

So long as I am President I will always protect your Second Amendment right to keep and bear arms.

Three years ago, the barbarians of ISIS held over 20,000 square miles of territory in Iraq and Syria. Today, the ISIS territorial caliphate has been 100 percent destroyed, and the founder and leader of ISIS — the bloodthirsty killer Al?Baghdadi — is dead.

Our message to the terrorists is clear: You will never escape American justice. If you attack our citizens, you forfeit your life.

It is also not our function to serve other nations as a law enforcement agencies.

This is our glorious and magnificent inheritance. We are Americans. We are the pioneers. We are the pathfinders. We settled the new world, we built the modern world, and we changed history forever by embracing the eternal truth that everyone is made equal by the hand of Almighty God. America is the place where anything can happen.