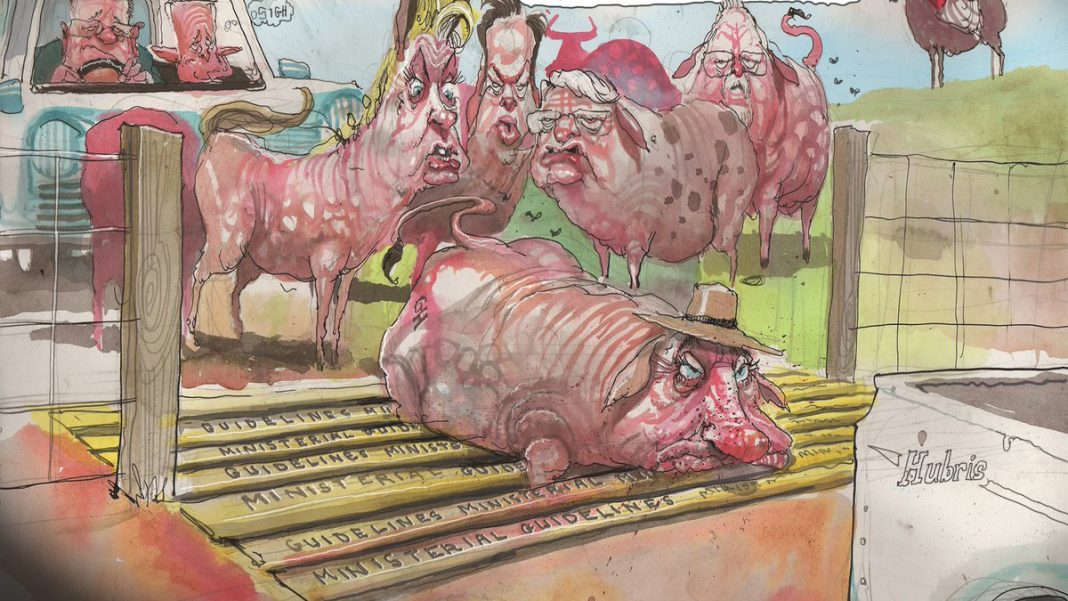 It might be small comfort to The BFD readers in despair over the state of New Zealand’s National Party to learn that your Nats have got nothing on their Australian namesake* when it comes to dysfunction, poor leadership and outright political bastardry. While the Liberals might rely on the Nationals’ fifteen seats, they must surely be tempted to give their junior Coalition partners a good thick ear over their recent behaviour.

Last year, it was Barnaby “The Beet-rooter” Joyce’s marital shenanigans. In recent weeks, it’s been the ham-fisted pork-barreling of former Sports Minister Bridget McKenzie. Now the Nats are indulging in the sort of leadership in-fighting that Australians saw more than enough of from Labor and the Liberals. Worse, “renegade” Nats are doing shonky deals with Labor.

With partners like these, why would the government need opponents?

What a shemozzle. A week after the mad uncle, Barnaby Joyce, tilted unsuccessfully to snatch the National party leadership back from Mr Invisible, Michael McCormack, the divisions not only in the Nats but across the government are now spilling out like the guts of a bloated fly-blown carcass of a cow.

Despite Keatingesque protestations of having only one shot in the locker, it’s now clear the mad uncle intends nothing of the sort. It’s hard to believe that Joyce acolyte and McCormack antagonist, Queenslander Who O’Brien, would have first pulled the plug on the National party room and then sensationally accepted the deputy speakership gifted by a mischievous Labor and a handful of mad uncle supporters without a wink and a nod from the mad uncle himself. It’s also hard to believe the hitherto non-entity O’Brien has any independent political mind of his own, though the promise of a huge salary boost must have overcome any scruples he may have had about profiting from putting himself before his parliamentary team.

[…]And don’t get us started on his keeping Ms Shameless Spreadsheet, Bridget McKenzie, as Nationals Senate leader.

[…]But what’s truly inexcusable is the Nationals fratricidal poison starting to infect the Coalition joint party room. The issue that caused today’s party room flare-up between MPs may have been coal and energy policy, and a coterie of inner-city Liberal know-alls whining about the aggressive pro-coal tactics of Canavan and other Nats free from the constraints of ministerial responsibility, but it’s really increasingly frustrated and angry Libs across the factions resenting the Nats tail constantly wagging the Coalition dog.

Even worse, the Nationals’ running with their scissors is cutting open old wounds in the Liberals. The Libs have always had their tension between centre-left “wets” and conservative “dries”, but the harsh reality now is that their voting base is almost entirely conservative: regional and suburban, working and middle-class.

Under wannabe-Green Turnbull, the “Broad Church” party looked like nothing so much as those grovelling British supposedly “Christian” churches who hand the pulpit to imams to preach that there is no god but Allah. The Morrison election was supposed to have put an end to that nonsense. But, emboldened by the Nationals’ yammering, the wets are leaving puddles all over the party room again.

Even the suggested “compromise candidate” is pretty compromised: David Littleproud copped a hiding last year from drought-stricken farmers angry over the balls-up that is the Murray-Darling Basin Plan.

It looks like the only real choice for the cockies is a compromise candidate in the newly-elevated deputy leader, David Littleproud, who appears to have the confidence of sufficient Invisible and mad uncle supporters[…]unless this disgraceful Nationals leadership vacuum is filled fast, the Coalition will flounder, the Morrison government will struggle to regain its balance and restore voter confidence after a bruising three months, and Labor’s Anthony Albanese stands to win the next election by default.

*Despite the name, the Aussie Nationals are not quite comparable to the Kiwi version. New Zealand’s National Party are an almost-exact analog to Australia’s Liberals. Australia’s Nationals are the old Country Party, a weird amalgam of gubmint-subsidy agrarian socialism and pumpkin-scone conservativism.