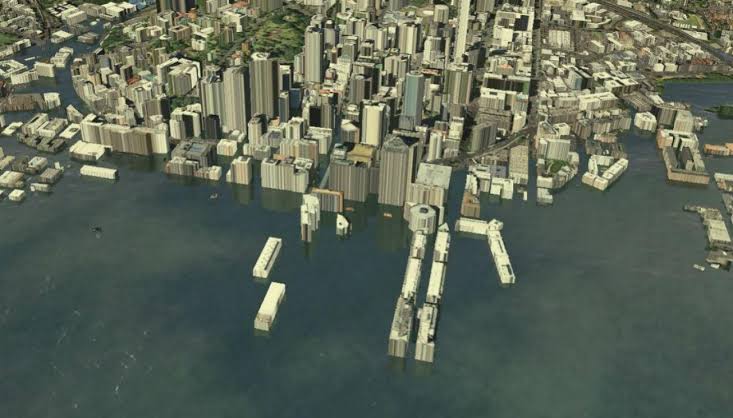 The story goes, so we are told: Evil mankind burns petrochemicals. This creates CO2. Human CO2 has an extraordinarily amazing effect on the greenhouse earth. The planet gets dangerously warmer. The ice on land (glaciers, Greenland & Antarctica ice sheets etc) melt. Sea level rises. [Arctic sea ice does not count as it is floating anyway so has nil effect.]

Rinse and repeat. Sea level rise accelerates. In other words, there is a greater and greater sea-level rise every year. This is a bad thing because Al Gore and Obama have seaside mansions and all the 1,196 Maldives Islands will be completely underwater by September 2018.

But is this sea-level rise acceleration really true? The Spectator has an in-depth look at the issue.

Way back in the 1700s the Liverpool Harbour Master began recording tide data. This has continued to become the Permanent Service for Mean Sea Level (PSMSL) which now maintains a database of tide gauge data from all over the world.

Along come the IPCC and their computer models which predicted an acceleration in sea-level rise. The data were scoured looking for the conclusive proof of mankind’s perfidy. But alas, despite all their efforts, the committees in 1990 (13 experts), 1995 (24 experts) and 2001 (36 experts) stated that they could find no acceleration of sea-level rise in the 20th century despite the rise of CO2 during that time.

But, obviously, a satellite and all the high-tech wizardry has got to be better than a float in a tube down the wharf somewhere, so it must be true. Proof positive of what they were looking for – acceleration.

This interpretation was made without any detailed review of the reliability of tide gauge data from all over the Earth and technical altimetry problems in a satellite system; a system where a one millimetre of error in its 1,366 km orbital distance from the Earth’s surface translated to a sea level rise error of 10 cm in 100 years!

The sea level debate became an even larger can of worms in 2018. The University of Colorado, which manages the Jason satellites on contract to NASA, reported that not only had there been no acceleration of sea level rise in the satellite data there had been a deceleration in the last decade (2008-2018); so even the satellite data had not been able to detect acceleration of sea level! It was proposed that a cooling event due to the 1991 volcanic eruption of Mt Pinatubo in the Philippines had delayed the sea level acceleration that would have eventuated by 2018 but would still emerge from the noise of internal climate variability in the coming decade barring another major volcanic eruption.

The technical altimetry problems with the satellite system were eventually exposed in 2012 when NASA reported that there was a level of error that contaminated climatological data records, such as measurements of sea level height from altimetry missions. […]

Obviously any quotes about sea-level rise and acceleration are still based on the flawed system as honesty is not a hallmark of the doomer alarmists.

How can recent scientific articles published in ‘peer-reviewed’ literature stridently announce to the scientific community and the world media accelerated ice loss into the ocean from the Antarctic and Greenland ice sheets when there is no corresponding acceleration of sea level rise due to that ‘extra ice’. These articles tinged with panic do not make sense. The lack of any evidence of sea level acceleration in the PSMSL tide gauge data, the NOAA tide gauge data or even in the flawed NASA satellite data shows that these articles are either biased or based on insufficient data derived from flawed ice mass measurement methodologies. In contrast, the data from thousands of tide gauges clearly show no acceleration of sea level rise in the last 120 years.

The BFD Video: How This Guy Builds Mesmerizing Kinetic Sculptures