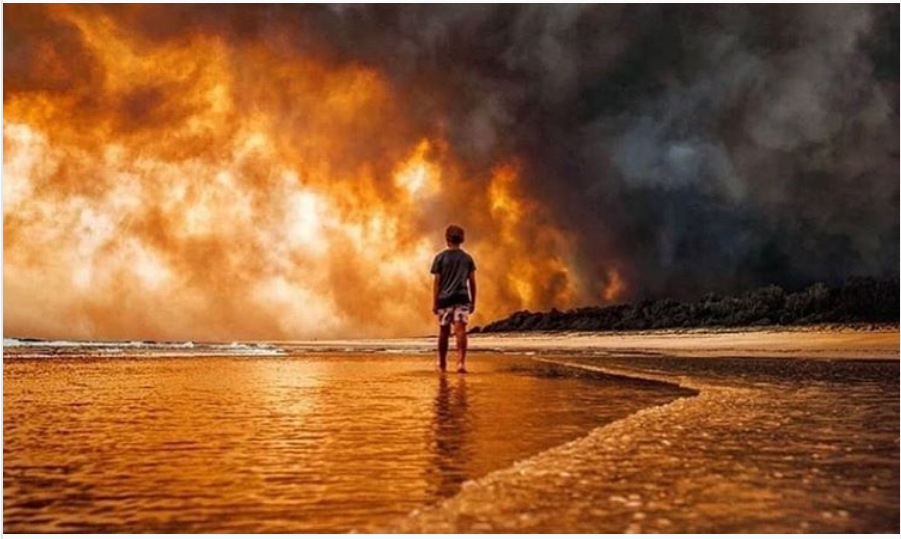 I hope my esteemed colleague, Lushington Brady, will not mind me invading his patch just this once, but I really felt impelled to comment on the awful situation in Australia at the moment. As our closest neighbours, and the nation that is always first to come to our aid in times of trouble, we owe them as much sympathy and assistance as we can possibly give. I admit that I have been watching in horror as these events have been unfolding, particularly over the last week or so, as an environmental crisis turned into a humanitarian crisis, with thousands of people stranded on beaches, with no food or water as supplies had run out. This is Australia we are talking about. It beggars belief.

But my heart sank as I realised that this was going to be another great opportunity for climate zealots to all screech from the usual song sheet; coal is bad, oil is bad, we have to go back to the Stone Age if we want to save the earth. This is in spite of the fact that Australia only contributes about 1.7% of global carbon dioxide emissions. That doesn’t matter somehow; it is singlehandedly wrecking the planet… and itself.

Being a naturally curious person, I did a bit of research into the history of Australian fires, and it made very interesting reading.

I failed to fall for the climate zealot claptrap, partly because I had read the Bryce Courtenay book, Four Fires, some years ago, and realised that fire has been a part of the Australian landscape for centuries. In fact, the Australian bush needs fire; it is hard for Kiwis to imagine, but, without fire, the bush cannot regenerate. It is all about managing it properly.

But fire management has been in decline now for a couple of decades. Controlled burns and fire breaks have been dramatically reduced or abandoned altogether. (Please note that this is true in New Zealand too; in the hills around the Hutt Valley, the firebreaks, once so prominent a part of the landscape, have disappeared. The next fire that happens up there could be devastating.) This has been the result of a combination of stifling regulations and Green policy. In a country which behaves like a tinderbox every few years, people are fined for chopping down trees that are too close to their houses. If ever there was a disaster waiting to happen, this was it.

Here is the saddest part. This bit breaks my heart. We all know that lightning strikes often cause fires in the Australian bush. But that is not the major cause.

The above graph confirms something that I read the other day – that 87% of fires are started as a result of human activity; approximately 40% are deliberately lit and 47% are accidentally lit. Only about 13% of fires start naturally.

In other words, there would be hardly any fires if people were more careful, and if arsonists were strung up and shot. The stupidity beggars belief.

So far this bushfire season, approximately 200 people have been arrested and charged with arson. There has been a suggestion that some of them are climate activists. I don’t know if that is true, but there are few explanations for this. It means that people, knowing the enormous risks, are deliberately causing death, property destruction and burning alive of countless animals and birds all in the name of… climate change. Really?

Remember those little darlings in East Gippsland who prevented the scheduled controlled burns from going ahead last September and October because they were worried about the burning of baby birds? Do they know that, apart from many of their neighbours’ homes and lives being destroyed (and possibly their own) that over half a billion animals and birds have been burnt alive in these fires?

New South Wales alone has lost over 30% of its koalas, burnt to death on trees caught up in the fires. The stupidity and ecological vandalism here is stunning.

Feel free to feel desperately sorry for those who have lost their homes, their businesses and livelihoods, their pets and livestock and even their lives in this man-made disaster. Feel sympathy also for the firefighters, both professional and volunteer, who risk their lives on a daily basis to control a situation that wouldn’t have happened in the first place, if human beings hadn’t been so careless, or so criminally-minded.

Scott Morrison has now joined the ranks of Donald Trump and Boris Johnson by being one of the most hated politicians on the planet. Yes, taking a family holiday while the fires were raging was a bad look, but he thought better of it and came back, to screaming abuse. Most of it is political, of course. While visiting the affected areas, the media focused only on those locals who refused to shake his hand, while many of the locals were desperate to talk to him about their needs. Politicising a tragedy is a modern-day media strategy, but it is contemptible. Those who need help don’t care which colour the politicians are – they just need help. Promoting political hatred while people’s homes are burning is just sick.

It is not just Australians who are insulting Morrison, however. The international celebrity circus is out and about, screaming its usual verbal diarrhoea.

When people’s homes are burning, when people are dying or are stranded on beaches waiting to be rescued, is most certainly not the time to talk about climate change. It is the time to talk about rescue, recovery and rebuilding. Darling Bette clearly has no idea that these fires were mostly caused by humans, although that wouldn’t fit her narrative anyway.

I thought I would leave the last word to a couple of Australian climate activists, who obviously want to be the ones to save the world. Apart from being gender-neutral (that in itself probably tells you all you need to know), they feel the need to save the planet and get their message across to everyone by… breaking into Scott Morrison’s house and… defecating in his pool.

They never got the opportunity to perform their particular circus act in Morrison’s pool, however, as he wasn’t there. It never occurred to them that prime ministers generally live in official residences. It also never occurred to them that prime ministers also have security, and they would never have been able to perform their little double act without being pinned to the ground with a gun at their heads. They would indeed have been crapping themselves then, I suspect… just not in the way originally intended.

Well, I feel safer already, knowing that we have people like that looking out for our interests. Don’t you?

God bless Australia. May God also protect you from idiots. Jeremy Clarkson may think (tongue in cheek) that Australia is God’s laboratory for failed experiments, but it is also home to about 25 million people. Personally, I love Australia… but it needs to take a much harder line on idiots. If the fires this time have taught them nothing else, it should have taught them that.

Why We Buy Weird Things in Times of Crisis

The Sun Still Shines in the UK

What Is ‘Community Transmission’ and When Did It Start in New Zealand?

We Have just one True History: Part Three

That’s One Hell of an Oopsie