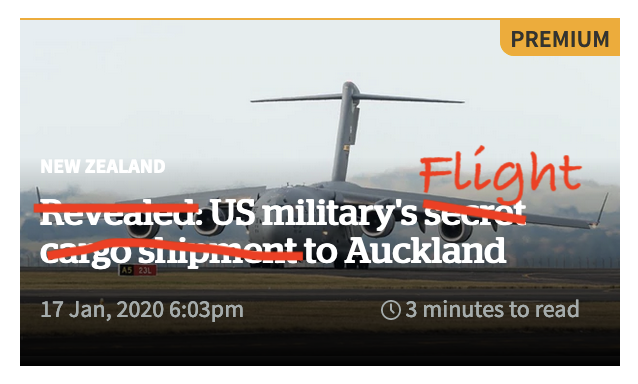 The NZ Herald touts their premium service as the best journalism there is. They say their premium content is “First-class content from leading global publishers”.

Yet a real-life example of this was shown on Friday to be little more than David Fisher doing what he does best: interviewing his keyboard, and making lurid and fanciful claims that couldn’t be substantiated. The sad thing is that the NZ Herald has the temerity to charge people for this tosh.

The headlines touted that they were revealing all about a “secret” US Military plane and its cargo.

Except the article reveals nothing of the sort.

It left as it arrived – with no fanfare and carrying a secret cargo.

It came from the East, early on Thursday morning, flying over Great Barrier Island and the Hauraki Gulf before landing at Auckland International Airport.

This morning it took off towards the East – then banked and headed across the Tasman.

What it carried to New Zealand, though, is secret.

The United States Embassy would not disclose where it was going or where it had come from, even though the information was able to be harvested from public sources.

In this case, it showed the aircraft at Cape Canaveral a few days ago, then flying to Honolulu before flying to Auckland – with a likely Pacific stop-off en route.

The US Embassy spokeswoman said: “The C-17 is transporting equipment on behalf of the US Government.

“For operational security reasons we do not routinely provide details of cargo being transported on US military aircraft.”

The spokeswoman said the US had co-ordinated approvals for the flight with our government.

He said the landing at Auckland’s public international airport was telling and suggested a number of possible reasons.

What crap. It’s the only airport where they could land. Those planes are too big for Whenuapai, and presumably, Ohakea wasn’t nearby to where the cargo needed to be. One thing we do know, it wasn’t for McMurdo, otherwise, they’d have landed at Christchurch.

Among those was speculation the flight was equipment for Rocket Lab, the Kiwi company launching satellites into space from Mahia Peninsula with a manufacturing base in Auckland.

So, not a “drop and lift” now, but it could be, might be, possibly be for Rocket Lab…except there was no confirmation of that, just idle speculation.

Buchanan said it was also possible the aircraft was collecting special forces soldiers from the NZ Special Air Service, based just 20 minutes’ drive from Auckland airport at Papakura. He said it was possible they could have been collected for transport to Australia for training.

So, not a “drop and lift” then, maybe, possibly, let’s just chuck this out there, guessing badly now, it’s the NZSAS! What a bunch of dicks: Fisher and Buchanan, not the NZSAS.

NZDF offered no answers, even refusing to say whether the aircraft would be using Royal NZ Air Force runways or equipment.

So, there we have it, nothing but David Fisher doing what he does best, making shit up.

David Fisher wrote 650 words when he could have written: “A big American army plane carrying something landed at Auckland airport, then flew away again after 24 hours, and we know nothing else about it”. That is the basics of the story.

Instead, he concocted a fantasy, like so much of his waffle masquerading as stories, plonked a click-bait heading on, essentially lying to readers about the whole story and plonked a Premium logo on it so people would have to pay to read it. It’s a fraud, kind of like him really.

The story told us nothing more than a big plane landed and flew away again. The cargo wasn’t revealed and Fisher interviewed an equally big plonker in Paul Buchanan who conjured up plenty of conspiracy from his enfeebled mind. The two tossers are supposed experts on matters military.

The whole story is just a sad example of the hacks the NZ Herald pays, ostensibly to write articles of fiction and sell them to a gullible public who think they are getting exclusive and intelligent writing. The last thing David Fisher wrote that was intelligent was his hagiography of Kim Dotcom, and that’s because all he did was take dictation from the fat German.

The NZ Herald is a fraud calling this rubbish “Premium”. Let’s fix their headlines: