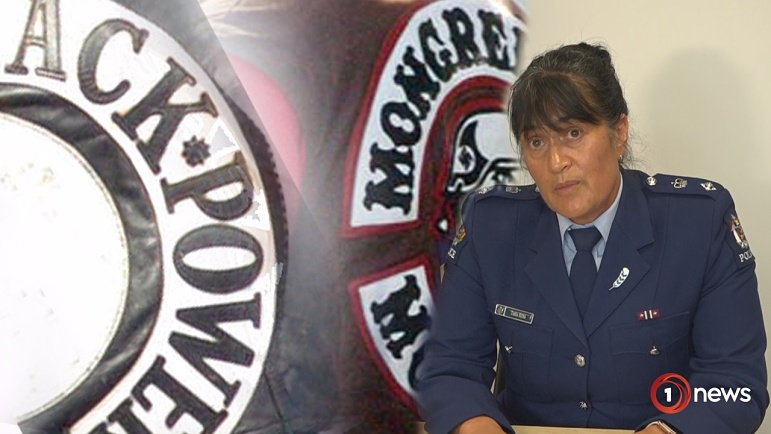 Since the police seem to have just about waved the white flag at gangs in this country, preferring instead to raid the homes of law-abiding citizens while they are sitting down to dinner, it seems to me that gangs have recently become much more visible. There was this recent attempt by Nigel Latta to make them look cute and cuddly…

Kindness and respect may be powerful, but let’s stop pretending these guys are like you and me. They are not.

Oh, and let’s not forget that gangs even use PR people these days to make them look cute and cuddly. Yep. Model citizens, these gang members.

For most small companies, having a media liaison is unattainable. But now one of New Zealand’s most notorious gangs has a PR person.

Louise Hutchinson, an ex-Wellingtonian with no gang experience, has stepped into the role at the Waikato’s Mongrel Mob Kingdom.

However, there was nothing cute and cuddly about events in Taradale at the weekend.

A senior Black Power member now says long-established conventions to avoid confrontation “seem to have gone out the window”.

Police are investigating a number of serious incidents and outbreaks of violence in public places that cumulated with a street brawl and shoot-out on Sunday afternoon.

That incident involved 30 to 40 Black Power and Mongrel Mob battling it out on Gloucester St in Taradale – causing terrified members of the public to flee into nearby shops to take cover.

It seems one group of gang members invaded another group’s patch… and here I was thinking that it is only animals that are territorial.

(Please note: I said ‘group’. That is what our dear leader calls the gangs these days. “Groups”.)

Gunshots left a 25-year-old man with head and torso injuries, with one of the shotgun pellets later found to have struck the rear of a child’s car seat – missing the child.

Good grief. Shootings on a Taradale St. Did the police disable the shooters, confiscate their guns, take away their firearms licences? Probably not, because they won’t have firearms licences, and the guns could well be illegal. Certainly, if the weapons are being used in a street shootout, there is a whole raft of laws being broken right there.

Many did not want to talk for fear of repercussions, but those who did described a hectic scene like something from a gangland movie.

A man in his 20s was transported to Hawke’s Bay Hospital and is in a stable condition – with extra security measures in place until he is discharged.

I have a suggestion for a way in which police could hold such people to account. Send a dozen armed police around to raid the local gang headquarters. Confiscate all the guns (because they won’t be compliant with any of the laws around firearms). Arrest those in possession of guns for illegally owning firearms. Take away and destroy all those guns that are now classified as illegal, or are not being stored in a proper manner. And prosecute everyone involved for being a menace to society.

Nah. Much easier to send them around to the house of a law-abiding citizen in the middle of dinner with his family who will never be involved in a street shootout in a million years.

So this is making the country safer… is it?