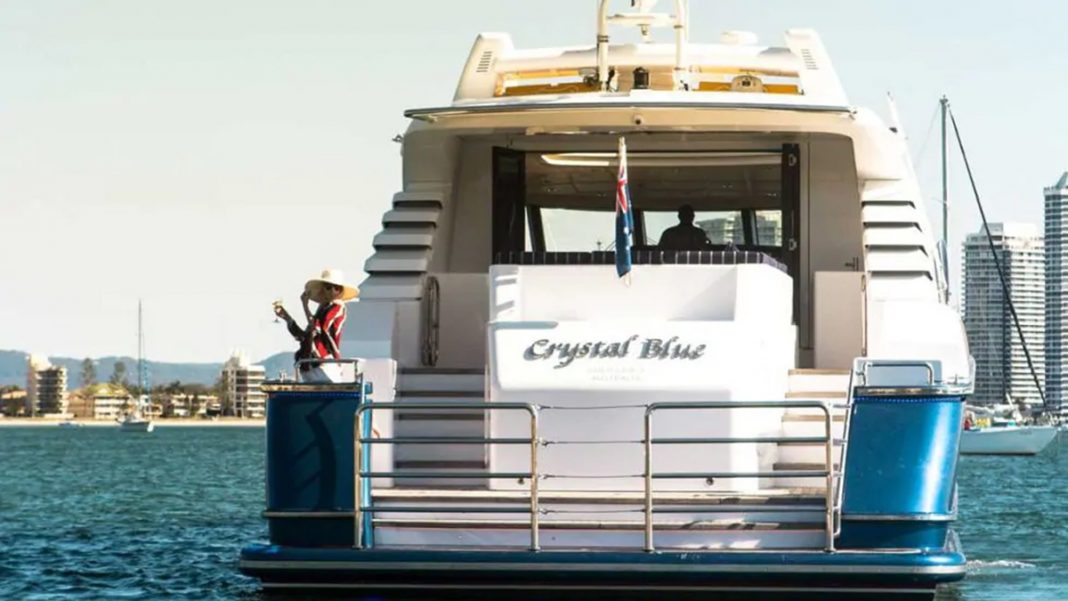 It was a case of a three-hour phwoar! when a female deckhand and a skipper decided it was time to trousers aweigh and run up the mainmast on a luxury yacht, in Queensland last year.

A deckhand who enjoyed a drunken sex romp with her skipper while sailing a luxury superyacht from Brisbane to the Gold Coast admits she “did the wrong thing”.

However, 26-year-old Cheya Handley pleaded not guilty in the Southport Magistrates Court to risking the safety of people on board when she was sailing the 80-foot (25-metre) Crystal Blue on March 3 last year.

Maybe they’ll have to re-christen her the Electric Blue (a joke only 80s kids will understand).

The boat’s skipper, 46-year-old Jeremy Piggott, has previously pleaded guilty and was fined $4000 for recklessly contravening his duty to ensure safety.

The pair were returning the boat after a charter trip and began drinking before having sex.

“Yeah, I did the wrong thing, drinking on the job. I should have known better, I screwed up big-time,” Handley admitted in an interview with a maritime safety inspector played to the court.

“We were chatting, laying down, looking at the stars and then got it on.”

As you do. The only problem is that while they were busy playing the Captain and the Cabin Boy, they weren’t paying attention to little things, like other boats.

While they were “getting it on,” the Crystal Blue hit a channel marker at Long Island around 11.20 pm.

Further south at Steiglitz, the vessel struck a moored yacht.

It nearly hit another boat at Jacobs Well before running aground.

Did the deck move for you, too, darling?

The court was told an inebriated Mr Piggott had attempted to steer the boat via remote control while the pair were intimate, and had deliberately lowered the boat’s mast to ensure a mounted CCTV camera did not record the pair’s activities at the front of the boat.

That’s not how that scene from Titanic went.

He urged the magistrate to consider the extreme power imbalance between the skipper and the deck hand saying “when the master of a vessel tells you to jump, you ask how high”.

He added that in the maritime industry, the skipper is regarded as “God”.

Mr Funch also said none of the damage sustained to the boat occurred during the 10 minutes Ms Handley was admitting to negligence.

Ten minutes? Clearly, this skipper is no god. Sounds like his torpedo had a bit of a short fuse.

What’s ’All This Then?

Tweet That Will Put the Cat Among the Pigeons

Gang Violence Spills Onto the Streets

The BFD Map of the Day: Civilian Guns Per 100 People

Since its creation in 2019, The BFD has been a leading centre-right political voice with constant analysis and commentary of political...
Read more

One thing that’s become inescapably obvious about the political left over the last decade is just how insanely tribalist and insular...
Read more