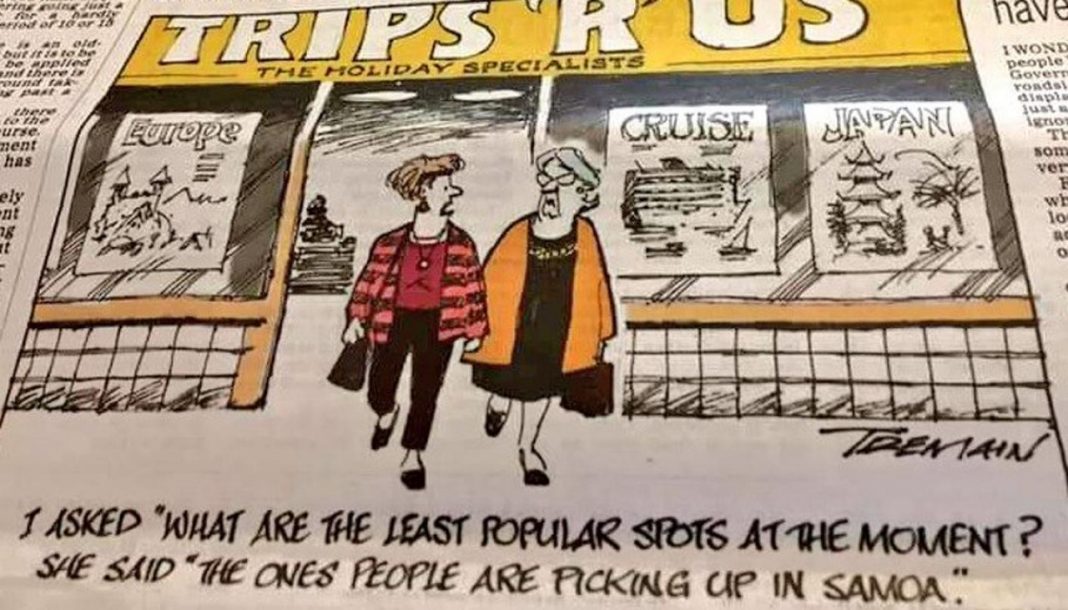 Over on Sir Bob Jones’ blog No Punches Pulled Bob gives his take on the current cartoon controversy. Unsurprisingly Bob has come out strongly in Garrick Tremain’s corner and describes him as “a National treasure.”

One of this country’s very best cartoonists is Garrick Tremain and for my money, has been for decades. Currently he’s under attack for his latest cartoon. This showed two women emerging from a travel agency and one saying, “I asked what are the least popular spots at the moment and was told, the ones people are picking up in Samoa.” The punchline here reflects a peculiarity of the English language, namely its multitude of words which have a variety of meanings. An example is “right.” It can mean the opposite of left, or an entitlement, or something correct as opposed to wrong, or a substitute for “yes.” You get the picture.

In this cartoon the critical word is “spots” which Garrick (who incidentally, I don’t know) has used to make a perfectly harmless joke using its double meaning, specifically a quiet tourist location (thus the request for the least popular spot) and measles, an infection causing spots.

Measles is currently big in the news because of the dreadful contagion in Samoa with over 60 dead, including 15 babies.

Probably any cartoon touching on the Samoan tragedy is best avoided in our unsophisticated society. The results were thus predictable. But the cartoon was a play on words (spots) and not a mocking of Samoa’s plight, as it’s since been wrongly claimed.

[…] The cry; not hard to guess- “racism.” It takes a fairly low intellect, certainly well under the moronic level, to find racism in that cartoon.

Depending on your personal point of view the cartoon was offensive, in bad taste or innocuous but there is zero justification to be found for the outrageous claim that the cartoon was racist.

Bob goes on to explain why the two major newspaper chains were so quick to put the boot into the Otago Daily Times.

Easily the most predictable was the reaction from the two major newspaper chains. Both piled into the ODT. There’s a reason underlying that, namely it’s privately owned and not part of their groups and is measurably the most successful major newspaper in the country.

I well remember when a complaint to the Human Rights Commission was made about a cartoon on Whaleoil which back then was the most popular and influential blog in New Zealand. In that case, the cartoon was in response to the horrific child abuse and death of a little Maori boy called Moko.

Last week’s newspaper audit figures showed the Stuff’s flagship Dominion Post with a record sales drop of 14.17%. So too with the Herald, down, also a record, a disastrous 8%. The ODT on the other hand fell a mere 5%.

As a newspaper lover I don’t enjoy reading those numbers but accept the inevitable, namely they’re living out their last days. But one thing’s probable; the ODT will be the last one standing. It’s a fine newspaper.

There is an old saying, those who can, do; those who can‘t, teach.” I wonder if we should create a new saying…