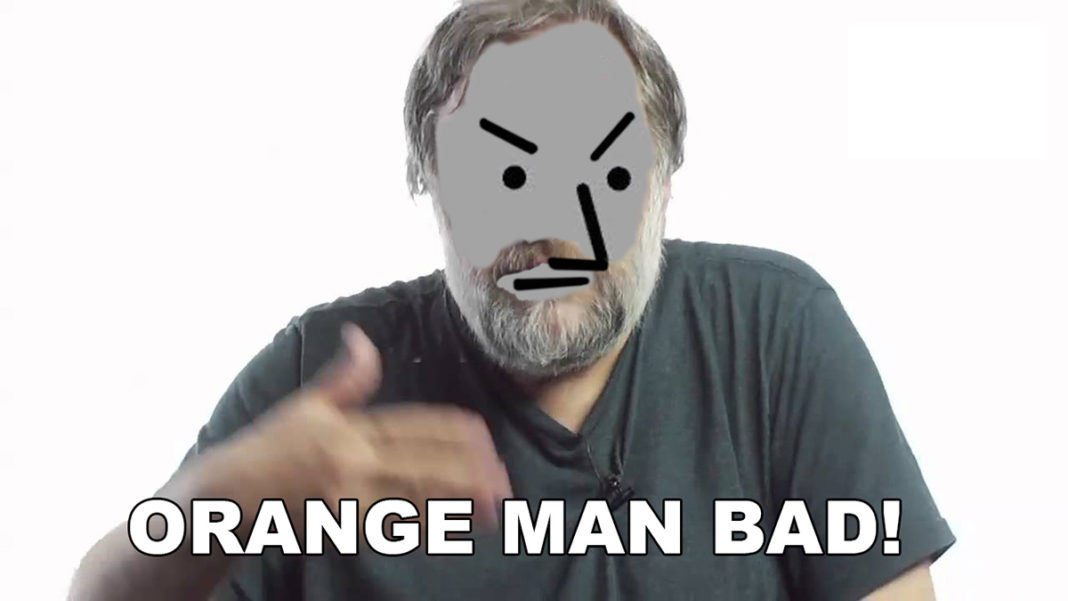 Slavoj Žižek is a ‘Continental’ philosopher and a Marxist (which is more or less a tautology), and he lives up to it. Like other famous ‘thinkers’ of that ilk, his stock-in-trade is avoiding anything like clarity of thought. Instead, they dance about, throwing verbal gesticulations around like so much word-confetti. After all, if these blokes said what they actually think in plain language that everyone could understand, their cover would be blown in an instant.

Yet, for once, talking about Trump’s re-election chances, Žižek almost says something sensible. Of course, Žižek knows that saying anything good about Trump would be even worse career suicide than speaking in plain words, so he naturally resorts to his standard mode of playing rhetorical peas-and-shells with cut-and-pasted leftist tropes.

I’ll cut through the endless, jargon-laden reiterations of “orange man bad!”, and highlight the rare paragraphs where Žižek risks actually saying something sensible for once.

The followers of Trump do not act ‘irrationally’, they are not victims of primitive ideological manipulations which make them vote against their interests. They are quite rational in their own terms: they vote for Trump because in the ‘patriotic’ vision he is selling around, he also addresses their ordinary everyday problems – guaranteeing them safety, a permanent job, et cetera.

When he was elected president, I was asked by a couple of publishers to write a book which would submit the Trump phenomenon to a psychoanalytic critics, and my answer was that we do not need psychoanalysis to explore the ‘pathology’ of his success – the only thing to psychoanalyze is the irrational stupidity of the left-liberal reactions to it, the stupidity which makes it more and more probable that Trump will be re-elected. To use what is perhaps the lowest point of Trump’s vulgarities, the left has not yet learned how to grab him by the pussy.

Of course, Žižek has to sniff about “populism” and “vulgarity”. These are the watchwords the Wise Masters of the Left use to remind themselves that they’re not just better off than Trump’s followers, but are actually better people. But Žižek is making a surprising admission: Trump voters are rational; Trump is talking about (and delivering on) the things that matter to them.

And the left are being idiots.

Trump is not winning just by shamelessly bombarding us with messages which generate obscene enjoyment at how he dares to violate the elementary norms of decency. Through all his shocking vulgarities, he is providing his followers with a narrative which makes sense – a very limited and twisted sense, but nonetheless a sense which obviously does a better job than the left-liberal narrative.

As always, Žižek is couching his criticism of his fellow leftists in the sniffy language of leftist superiority, but the gist of what he says is shockingly accurate. The left pride themselves on their assumed intellectual and moral superiority; but they’re idiots, and they’ll keep on losing. Trump might be a billionaire mogul, but he understands the American people far better than the elitists of the left. That’s why he endlessly packs out stadiums across the country.

And that’s why he’ll keep winning.

The BFD Video: Democrat Goes to Trump Rally & Realizes Dems Are SCREWED in 2020