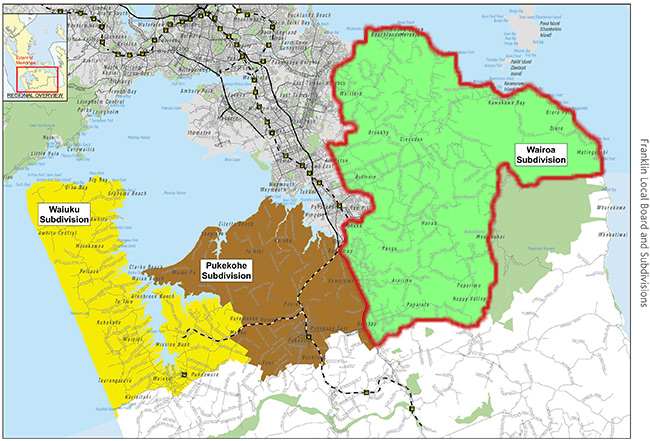 In 2016, there were just three candidates for the three vacancies avoiding the need for a vote.

Malcolm is standing for a third term on the Franklin Local Board. Being semi-retired, he is able to devote himself fully to the role and he’s evidently very active in his Beachlands community. He can often be found delivering food and produce from various generous locals to the Beachlands Memorial Hall, where the Beachland Community Trust operates as a hub to help struggling families and young people learning work skills.

The Maraetai Coastguard also benefits from $40,000 funding from the Local Board with a playground and reserve development also in the pipeline.

It appears that after the nominations closed Cleave got together with Ani Stace and Lance Gedge to form a Team Wairoa ticket, judging by posts on Cleave’s facebook page.

Jesse appears motivated to stand to do something about the poor state of local roads, improve mental health, deliver a new high school and provide activities for teenagers. From local board, Jesse can advocate for roads, and might be able to deliver activities for teenagers but aside from a skate park I have no idea. Perhaps he can elaborate on that.

Local boards have nothing to do with providing education or health services. I don’t know if Jesse knows that.

Angela is Chair of Franklin Local Board, having relinquished her own business to dedicate herself fully to the role. Previously she was also chair of the Clevedon Business Association.

It is clear that Angela has been extremely active in the community since being elected to the local board. She is well informed on the varied issues within Franklin’s many small localities and actively engages with regular meetings to ensure she is well connected.

Transport infrastructure is managed by the AT behemoth so the best a local board member can do is advocate but Angela does this very actively, taking staff around the ward to ensure they’re familiar with the many issues.

There is a clear distinction between the incumbents on local board and those who seek to replace them; the incumbents know their job while the challengers appear to not.

Gedge has actually been a community board member prior to the Supercity amalgamation and was on Franklin Local Board in 2010-13, so why the hell is he using his profile to criticise Auckland Council for lacking leadership over a high school?

Lance owns two businesses, servicing fireplaces and water tanks. Unsurprisingly he is well versed with the complaints of his customers regarding roads, drains and council services in general.

Ngatai has a background in health, sitting on the board of Counties Manukau District Health Board and working in restorative justice with the Auckland District Court. He has plenty of experience working with community groups and charities including the Maori Health Advisory Committee, Arthritis NZ, White Ribbon and Man Up.

His facebook page Transitioning Out Aotearoa shows that he is very involved in Man Up which has strong links with Brian Tamaki’s Destiny Church.

His background doesn’t indicate to me any qualities that would make me believe he would do a better job than the incumbents, nor does he identify any issues he would address from that position.

Hopkins has left behind a career in international financial markets to settle back in Franklin as a local board member and local sports volunteer. Over the previous term, she has been vocal about the infrastructure issues Franklin is experiencing as a result of the growing population, forming solid relationships with the relevant CCOs.

She has identified several areas which she wants to continue improving if re-elected such as roads, walking trails, recreational facilities, halls and improving the cleanliness of waterways.

Unfortunately, she is also very keen to increase arts funding which is a bloody waste of money when infrastructure is clearly so important in the region.

Stace has an ethical tea and gift shop on the Pohutukawa Coast. I don’t know what the difference between ethical and unethical tea is, but it looks like she is targeting the guilt-ridden wealthy environmentalist consumer.

It appears her main motivation for standing is the environment and giving everybody a voice on the local board so projects can benefit everyone. It won’t take too many board meetings to grind that idealism out of her. She has also mentioned working to establish a Pohutakawa High School, the futility of which I mentioned earlier.

MY RECOMMENDATIONS: You have up to 3 votes in this FPP contest

The BFD Nightcap: Who Stole Their Childhood?

The BFD Nightcap: Who Stole Their Childhood?

Tiny Home Thursday: One Man’s Dream Tiny House You Have To See

The BFD Video: How to Fliteboard – eFoil

With Opponents Like These, How Will Trump STOP Winning?

The BFD Wisdom: A Lesson in Giving

Farmers Hit Back at Bureaucrats, Greens Over Bushfires

The BFD Cartoon of the Day by SonovaMin: Hot Air & Sulphides

Has anyone else noticed how silent PM Ardern and Justice Minister Little have fallen over the much-touted “fast-track review of NZ’s current hate speech laws”? There’s a reason for this: it’s an unpopular issue with NZ citizens and we happen to be in an election year.
Read more